Space Photos of the Week: Keeping an Eye on Jupiter’s Storms – WIRED

Jupiter has one of the most bizarre atmospheres in the entire solar system. Gas giants like Jupiter are believed to have some kind of semi-solid core, but are mostly made of gas like hydrogen, helium, and ammonia. The planet is also the fastest spinning orb in the solar system, which creates a lot of turbulence and some very complex storm systems. And for the past few years, NASA’s Juno spacecraft has been orbiting the planet to keep a close eye on Jupiter’s behavior. NASA, by the way, sourced the name from a Greek myth: Jupiter, king of the gods, was a philanderer and whenever he brought another woman back to his lair he’d hide his activity by engulfing himself with a thick layer of clouds. Too bad for him he didn’t realize that his wife, Juno, had the ability to see through the clouds. Joke’s on you Jupiter!

Earlier this month, NASA announced that two telescopes, the Hubble Space Telescope and the ground-based Gemini telescope, will partner up with the Juno craft to help scientists get an even more comprehensive look at the planet. Researchers want to understand how Jupiter’s atmosphere works, and the best way to do this is by viewing it through different wavelength filters. Fortunately both the Hubble Space Telescope and Gemini have the filters needed to see into Jupiter’s haze. By deploying lenses that screen for UV light, infrared, and other frequencies, scientists will get a more complete picture of what is happening.

This week we will encircle the famous gas giant and peer down onto the planet with Juno’s eyes. Grab your space suit, we’re going in!

Juno was 29,000 miles from Jupiter when it snapped this photo in May 2019. You can see the windy bands of Jupiter, as well as the series of white storms also called the “String of Pearls.”Photograph: Gerald Eichstadt/Sean Doran/NASA/JPL-Caltech/SwRI/MSSS 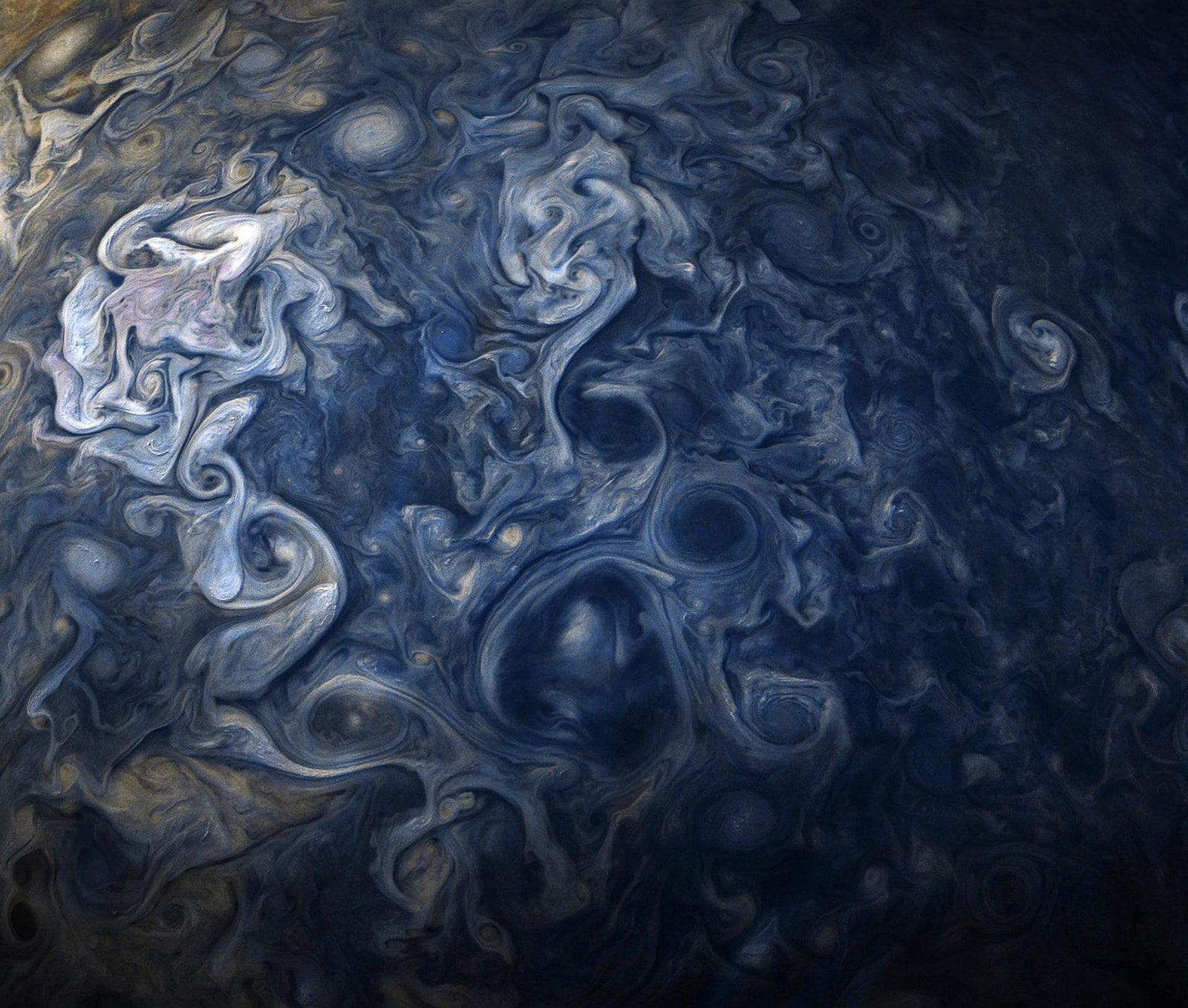 This is the view from only 11,000 miles above the surface. This “blue” region is made up of swirling, connected storms. The white clouds to the left are high-altitude clouds, which cast shadows onto the next layer of atmosphere below them.Photograph: Gerald Eichstadt/Sean Doran/NASA/JPL-Caltech/SwRI/MSSS 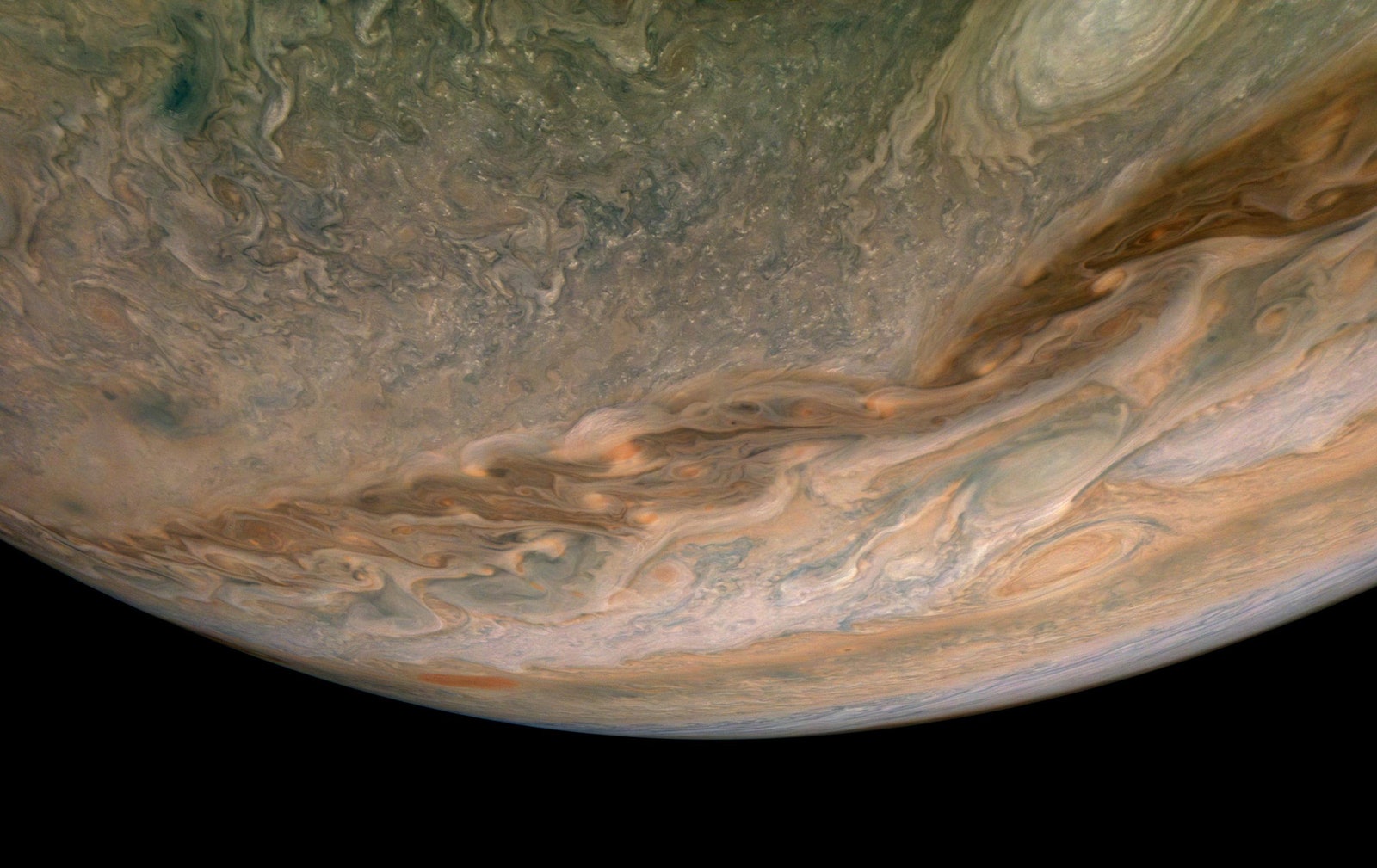 Jupiter completes a full rotation on its axis every 10 hours, which makes for a very churny planet, as you can see in this slightly dizzying photo of the windy bands that move at speeds of 300 miles per hour.Photograph: Björn Jónsson/NASA/JPL-Caltech/SwRI/MSSS 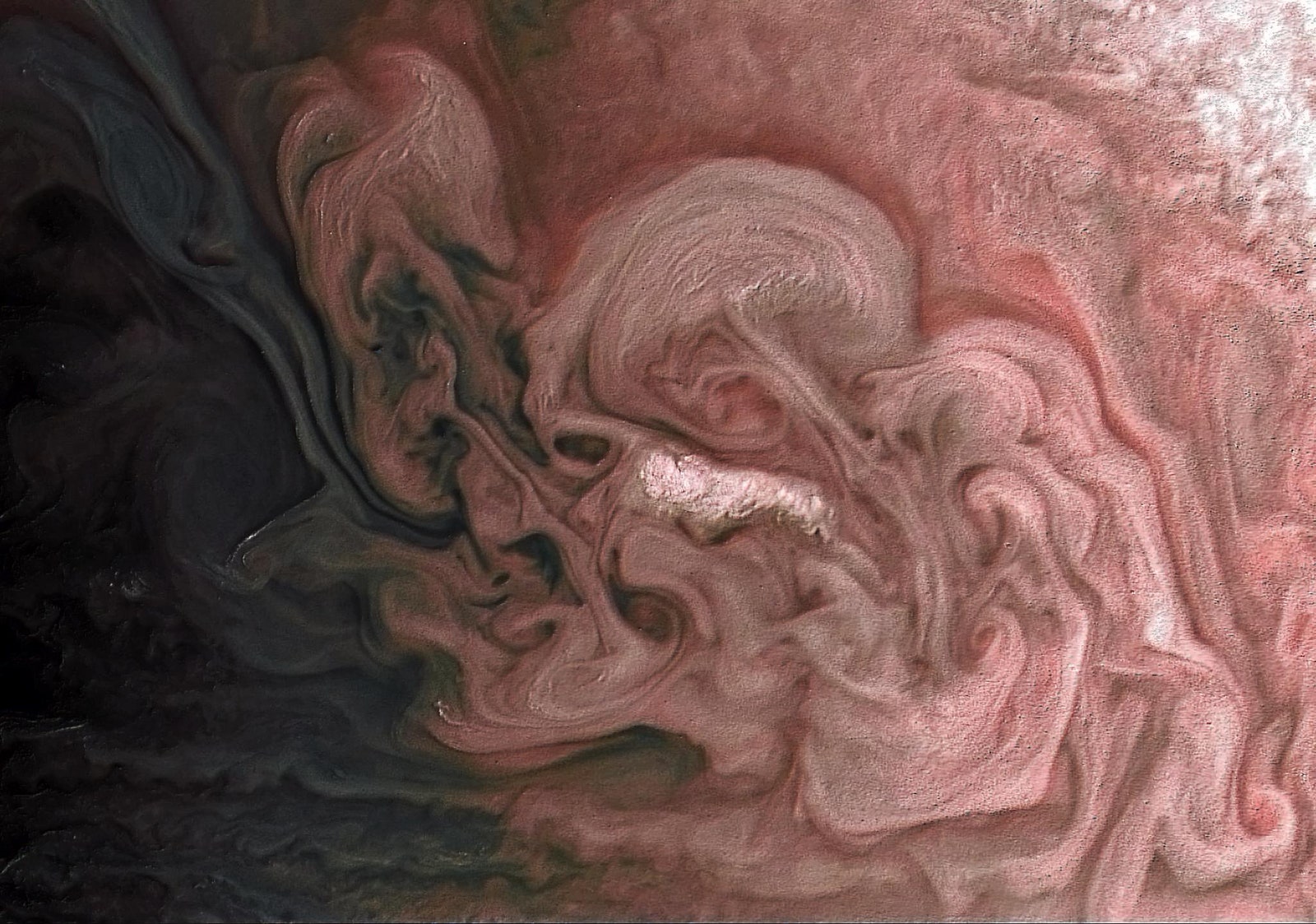 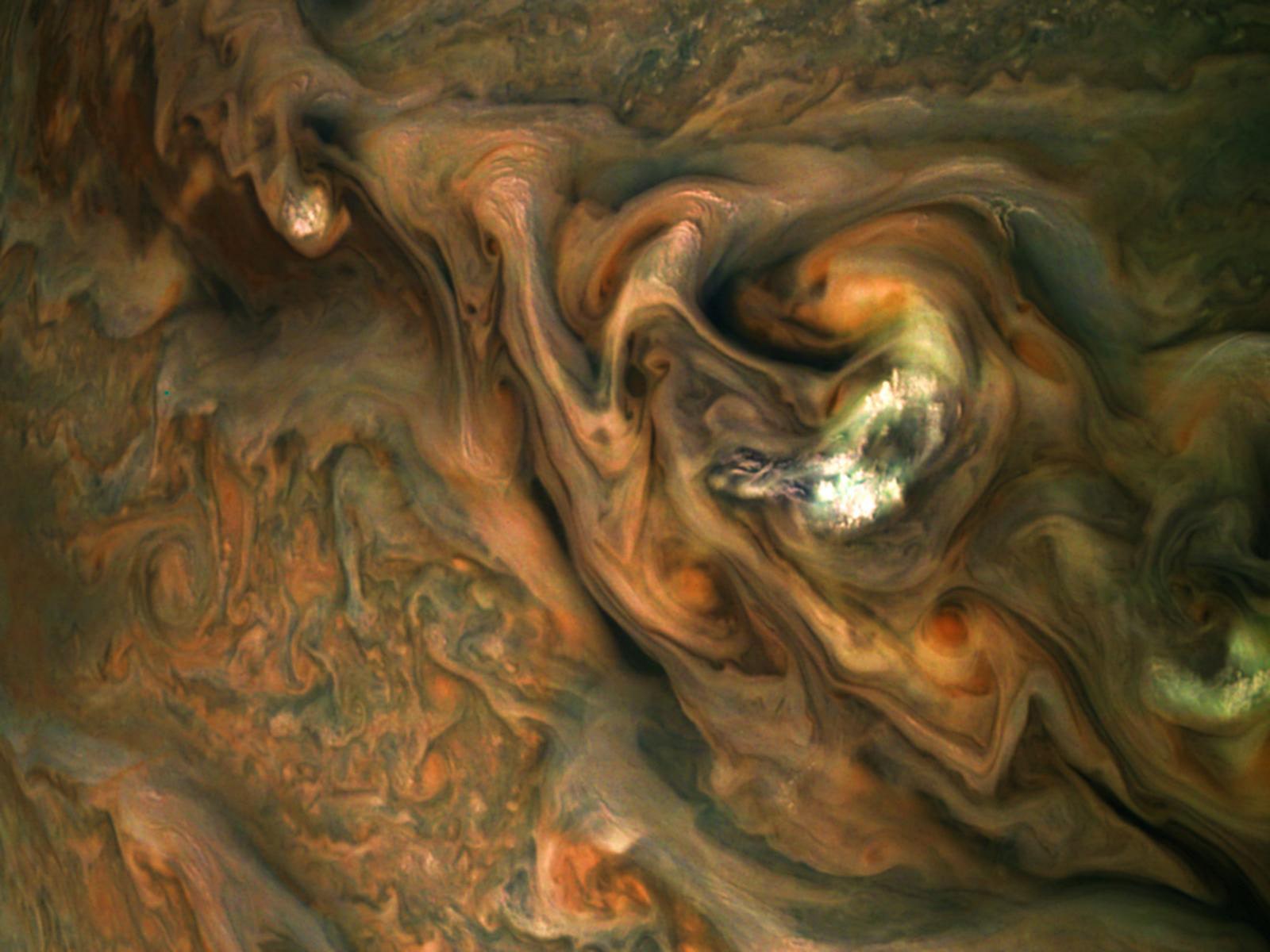 This jet stream, known as Jet N3, is an intricate swirl of storms. It wasn’t until Juno arrived at Jupiter that scientists realized the storms in the atmosphere weren’t just in the atmosphere, but rather they extended deep into the planet–some 1,900 miles deep.Photograph: Gerald Eichstädt/NASA/JPL-Caltech/SwRI/MSSS 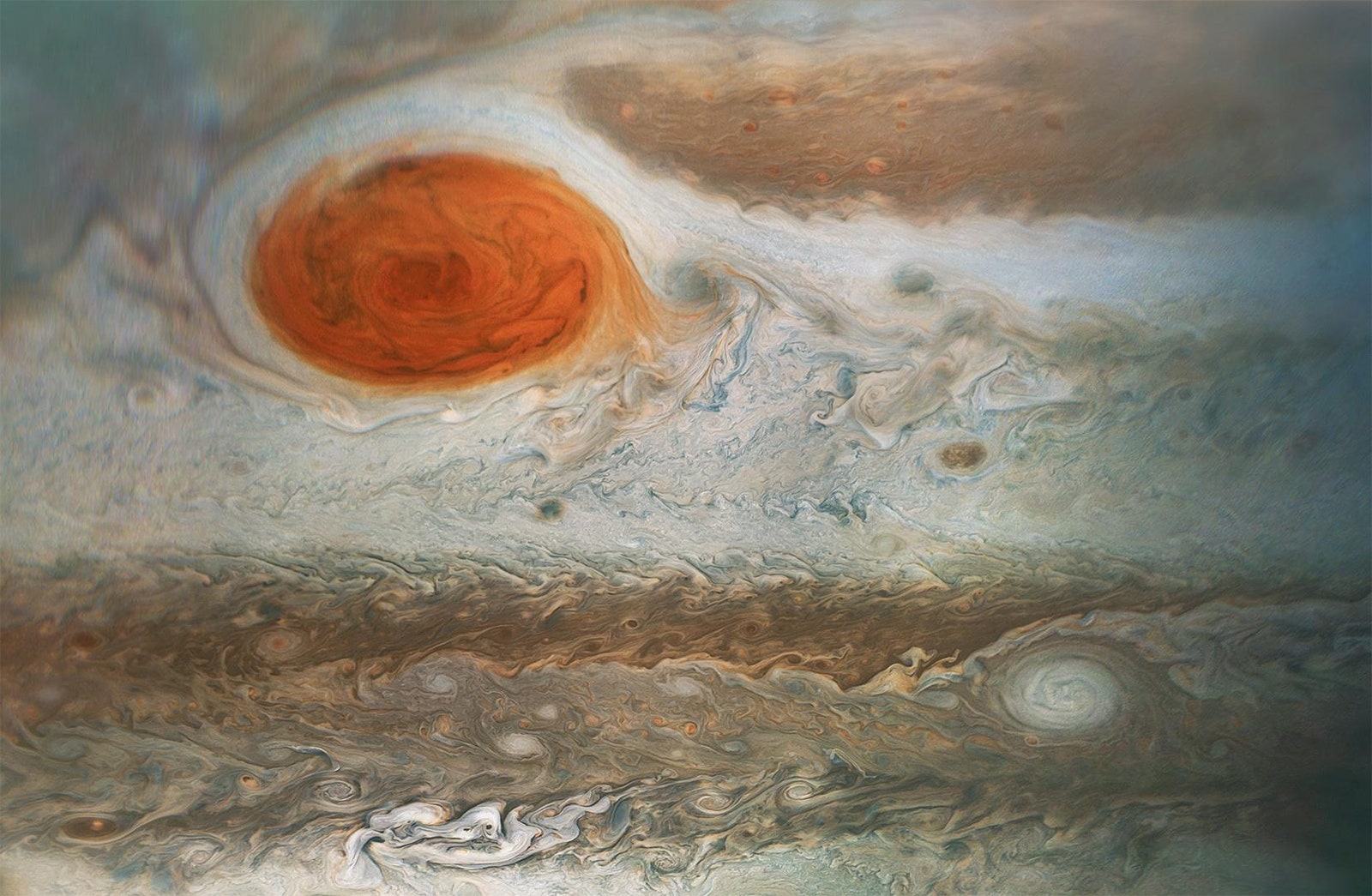 There is no mistaking Jupiter’s great red spot. This color enhanced image brings out the deep orangy-red of this iconic storm—scientists think that the reddish color could be caused by the sun’s radiation interacting with the ammonium hydrosulfide in the planet’s atmosphere. You can also see part of the tan-colored belt and a white cyclone that is not much smaller than the Earth. These different colors are likely created by the sunlight reflecting off of chemicals in the clouds.Photograph: Gerald Eichstadt/Sean Doran/ NASA/JPL-Caltech/SwRI/MSSS

Head over here to look at more space photos.