SpaceX Crew-1: what to expect from the launch to the ISS – The Verge

On the evening of November 14th, SpaceX plans to re-create the monumental feat it achieved earlier this year by launching another crew of astronauts to the International Space Station. This mission is a milestone for both SpaceX and NASA. It is the first “operational” crewed flight for the company and a step toward making American astronaut launches relatively routine.

The flight, called Crew-1, will send a total of four astronauts to the International Space Station on SpaceX’s new Crew Dragon spacecraft, a capsule designed to launch on top of the company’s Falcon 9 rocket. Three of the passengers are NASA astronauts — Michael Hopkins, Victor Glover, and Shannon Walker — and a fourth is an astronaut with the Japanese Aerospace Exploration Agency, named Soichi Noguchi. The quartet will join three additional crew members already on the ISS, staying for up to six months before they leave in the spring of 2021.

The first “operational” crewed flight for the company

That’s double the number of riders that the Crew Dragon had in May when the spacecraft carried two NASA astronauts — Bob Behnken and Doug Hurley — on the vehicle’s debut crewed flight. While lots of fanfare surrounded that mission, SpaceX is now about to settle into a more or less regular flight pattern with the Crew Dragon, sending groups of four astronauts to and from the International Space Station every six months or so for NASA. It’s exactly why the Crew Dragon was developed for NASA’s Commercial Crew Program: to serve as a private space taxi for NASA’s astronauts to get to and from the ISS.

Here’s what you need to know about the lead-up to this mission, what to expect during SpaceX’s first operational flight of Crew Dragon and how things will play out in the years ahead.

Crew-1 comes more than five months after SpaceX’s history-making flight on May 31st that carried Behnken and Hurley to the space station. The mission marked the first time a private company had flown humans to orbit. It was also the first time that astronauts had launched to orbit from American soil since the end of the Space Shuttle program in 2011. For nearly a decade, NASA astronauts have had to rely on Russian rockets to get to the space station, launching out of Kazakhstan. When SpaceX’s Crew Dragon took off from Cape Canaveral, Florida, with Behnken and Hurley in tow, it effectively ended the gap in US human spaceflight.

“We are honored to be the nation’s launch provider.”

SpaceX’s May flight was a test, meant to demonstrate the capabilities of the Crew Dragon before it could start routinely flying humans to the space station. After poring over the data for that flight, NASA has certified that the Crew Dragon is indeed ready for regular human spaceflight, making it the first time the agency has provided certification of a private crewed vehicle. “We are honored to be the nation’s launch provider for crewed missions and take seriously the responsibility that NASA has entrusted us to carry American astronauts to and from the space station,” Benji Reed, senior director of human spaceflight programs at SpaceX, said during a press conference.

SpaceX needed to make a few tweaks to the Crew Dragon based on what it had learned from Behnken and Hurley’s mission. Perhaps the biggest change was to the spacecraft’s heat shield, a key piece of hardware that keeps the vehicle from overheating as it careens through Earth’s atmosphere. SpaceX found that when the Crew Dragon returned in August, some of the tiles in the heat shield had eroded more than the company expected.

SpaceX claims the erosion didn’t pose any danger to the crew, but the company opted to redesign part of the heat shield tiles, testing them ahead of this mission. The company says that it was “nothing to be concerned” about. “At all times the astronauts were safe and the vehicle was working perfectly,” Hans Koenigsmann, vice president of build and flight reliability for SpaceX, said during a press conference in October. “So this is something that we just in the inspection found… and decided, ‘Okay, we should probably reinforce the heat shield in this particular area.” 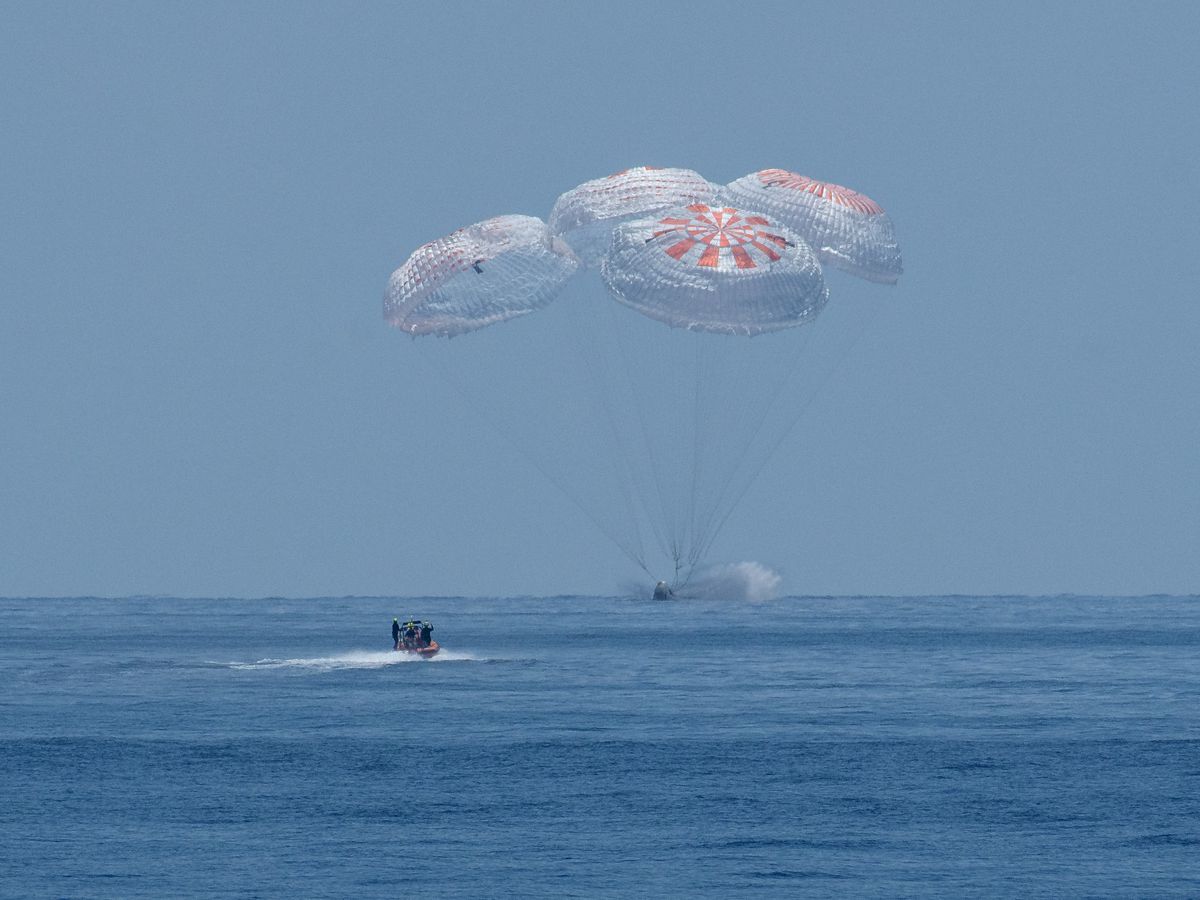 The Crew Dragon’s parachutes also behaved differently than expected on the previous flight, prompting an update. To splash down gently in the ocean, the spacecraft deploys a series of parachutes to slow itself down. Those chutes deployed at a slightly lower altitude than planned. SpaceX has since changed how the Crew Dragon measures outside air pressure to better determine when the spacecraft is located at the right part of the atmosphere to let out the parachutes.

SpaceX needed to make a few tweaks to the Crew Dragon

The final change SpaceX and NASA made revolves around procedure, not vehicle design. When the Crew Dragon splashed down off the coast of Pensacola in August, the vehicle was met by a swarm of recreational boaters who were curious to see a spacecraft up close. The sight of boats zooming in and around the capsule sparked immediate concern — for both the astronauts on board as well as the boaters themselves. The Crew Dragon uses propellants and fuel that can be toxic to humans if they get too close and aren’t taking proper precautions.

To prevent a repeat scene, SpaceX and NASA say they have worked with the US Coast Guard to create a 10-mile keep-out zone around the landed Crew Dragon so that no unauthorized visitors approach the vehicle in the water. “We want to have more boats on the next go around and make sure that the area is really clear of any other [civilian] boats,” Koenigsmann said.

With all of these changes in place, the Crew-1 launch should look nearly identical to the launch in May — though this one will take place at night. The spacecraft is set to take off on top of SpaceX’s Falcon 9 rocket from NASA’s Kennedy Space Center in Florida at 7:49PM ET.

After suiting up in SpaceX’s signature white-and-gray pressure suits, the four astronauts will travel to the launchpad at NASA’s Kennedy Space Center inside two branded white Tesla Model Xs. Once out of the cars, they’ll take an elevator to the top of the rocket and walk across an enclosed hallway to enter the Crew Dragon perched on top of the Falcon 9. The four will then get strapped into their seats by the SpaceX team as they wait for launch. 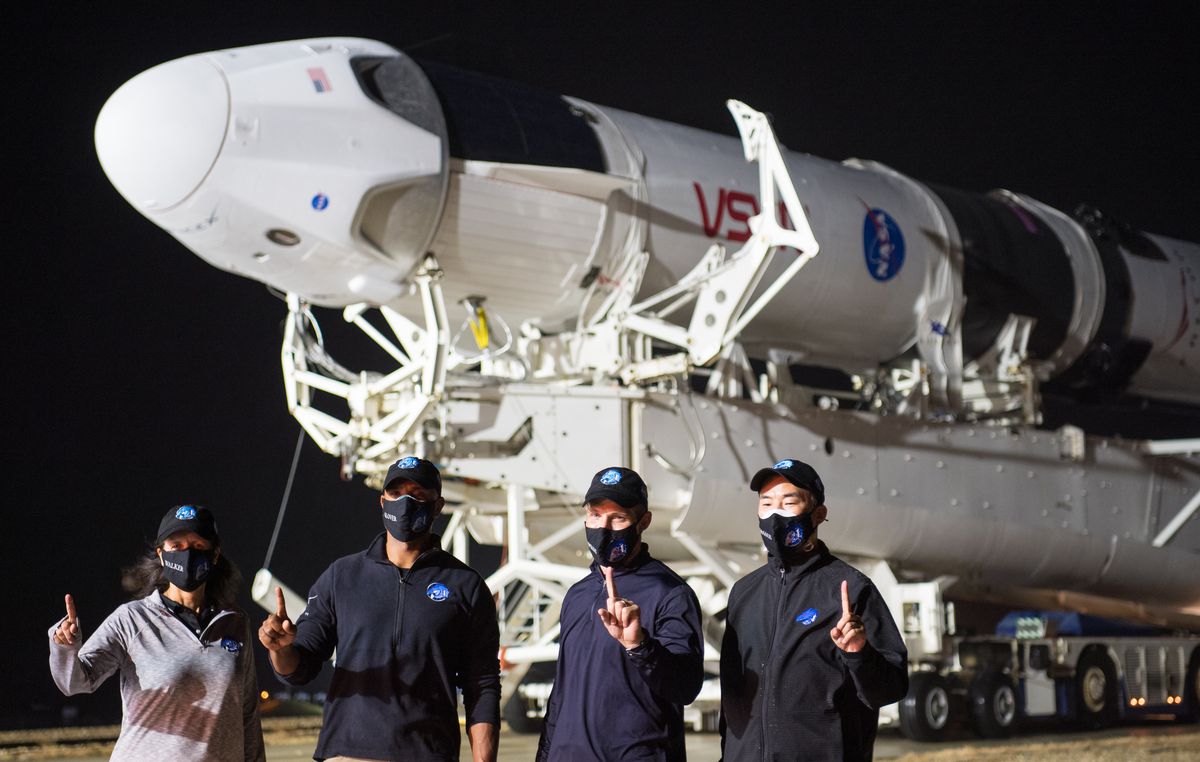 It’s a quick trip to orbit for Crew Dragon — just 12 minutes after takeoff. The crew will then spend around eight and a half hours in orbit, arriving at the International Space Station and docking around 4:20AM ET. It’s a much brisker trip than Behnken and Hurley’s mission, which took about 19 hours to get to the ISS.

Designed to autonomously dock with the space station, the Crew Dragon will slowly approach its destination in space and use a series of sensors and cameras to place itself on an open docking port. Once it connects, latches will secure the Crew Dragon in place, and the Crew-1’s six-month stay on board the ISS will begin.

The four-person team will join three people already living on the ISS: Russian cosmonauts Sergey Ryzhikov and Sergey Kud-Sverchkov and NASA astronaut Kate Rubins. It’ll be the first time that seven people will live and work together on the ISS, as crews have typically topped out at six people over the last 10 years. While the space station has more than enough room for the extra crew member, the vehicle is actually short one “crew quarters” or a place for an astronaut to sleep. Astronaut Michael Hopkins said NASA is hoping to send up another place for him to sleep while they’re on board the ISS, but in the meantime, he will probably sleep on board Crew Dragon.

With any launch, there is always the risk of delay. In fact, this mission was supposed to take place on October 31st, but NASA pushed back the flight to this weekend after SpaceX found some irregular behavior in the main engines of its Falcon 9 rocket. The company had to swap out two engines on the Falcon 9 being used for this flight to address the issue.

Moving forward, the biggest threat to a timely launch could be weather. This week, all eyes were on Tropical Storm Eta, currently crossing through Florida. The storm now seems to be heading north of the launch site and should clear the state on Thursday. 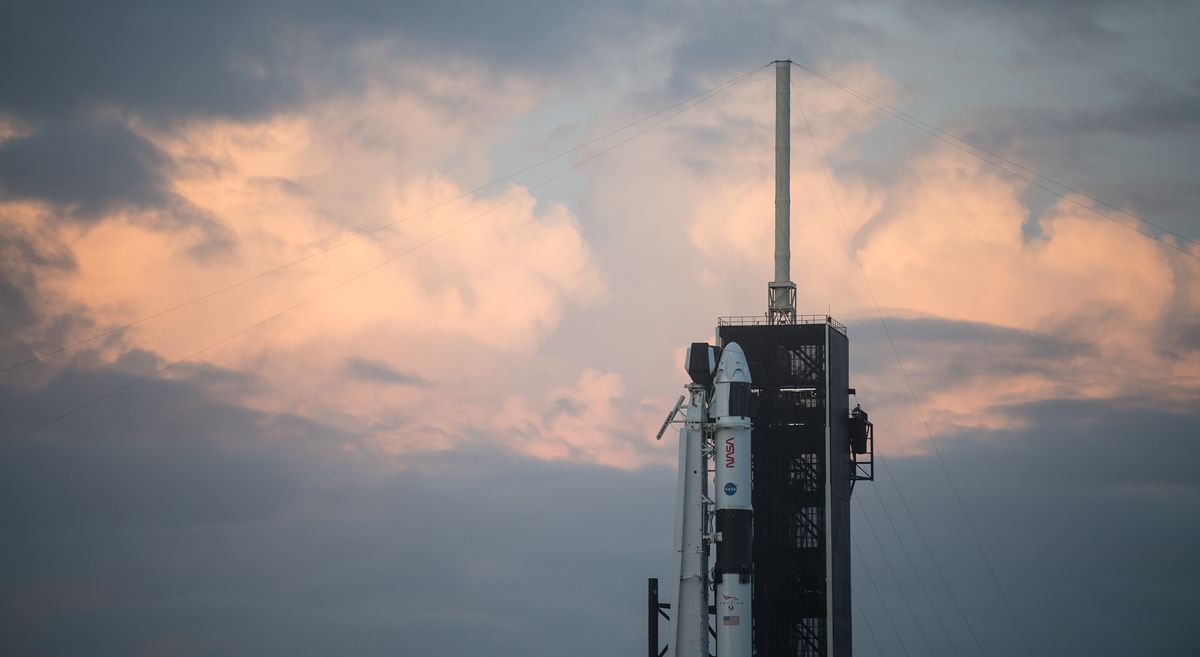 Still, weather is always a lingering concern, especially with these passenger flights to the station. SpaceX’s Crew Dragon capsule has the ability to abort during flight, by detaching itself from the rocket and parachuting into the ocean to save the crew members if something goes wrong. That means flight controllers will be keeping an eye on weather throughout a large swath of the Atlantic Ocean to make sure if an abort does happen, the Crew Dragon doesn’t splash down in choppy seas.

For now, weather seems like it may cooperate, as there is a 60 percent chance of favorable conditions. Everyone is focused on a launch getting off the ground this weekend. NASA’s live coverage will begin at 3:30PM ET on Saturday, following everything from launch to docking to a welcome ceremony for the incoming crew members scheduled for Sunday morning. It’s going to be a whirlwind trip this weekend if the Falcon 9 rocket can get off the ground on schedule.