Starship SN6 is now into the business end of its initial test campaign, with a Static Fire test with her Raptor (SN29) engine expected as early as Sunday, ahead of a hop test at the end of the week.

While SN6 is out at the launch site, numerous Starships are being worked on at the Production Facility, with SN5 undergoing post-hop processing, SN7.1 – a test tank – being prepared for an over-pressure test, along with SN8 stacking in the Mid Bay and SN9’s first sections also appearing out in the open.

It was only a couple of weeks ago that Starship SN5 conducted a successful 150-meter hop. Under the power of Raptor SN27, this was the third time a Raptor had flown, following the 20 and 150 meters hops of Starhopper almost one year ago.

Despite the teething issues with the earlier Starship prototypes – resulting in a few “pops” rather than hops – the value of the subsequent data points gained from those failures paved the way for the ultimate success enjoyed by SN5, in turn shining a torch for future Starships to evolve the test campaign.

Starship SN5 is expected to hop again, as SpaceX utilizes both SN5 and near-twin SN6 to refine their test hop and processing techniques. For the interim, SN5 is housed inside the Mid Bay, after swapping places with SN6.

Just a week after taking a road trip to the launch site, SN6 has successfully passed all the relevant milestones towards firing up Raptor SN29.

Those milestones included integration on to the launch mount, a fueling test with Liquid Nitrogen – both at room and cryogenic temperatures – before Raptor SN29, fresh from its testing at SpaceX’s McGregor test site, was installed into the aft bay of the vehicle.

As to when the tests are planned, local road closure notices provide the main clues. At this time, SpaceX has booked 12-hour test windows, beginning on Sunday, opening at 8 am local.

This Static Fire test will follow the same routine as SN5’s, with a short firing of the Raptor to provide the required data into the performance of the vehicle, the Ground Support Equipment, and the health of the Raptor during the firing.

Local notices also provided information on the target for the 150m hop, which is listed as taking place NET (No Earlier Than) Friday.

The spacing between the Static Fire and the hop was likely extended due to the forecast of poor weather in the region during the week. This is also likely responsible for SpaceX moving the Static Fire up by one day after it was originally planned for Monday.

While SN6 and SN5 conduct a game of hop tag-team, SN7.1 is expected to take up residence at the launch site on a standalone test stand.

SN7.1 is a test tank, akin to previous test tanks that have been used to push the limits of the welds to allow for data points on margins. 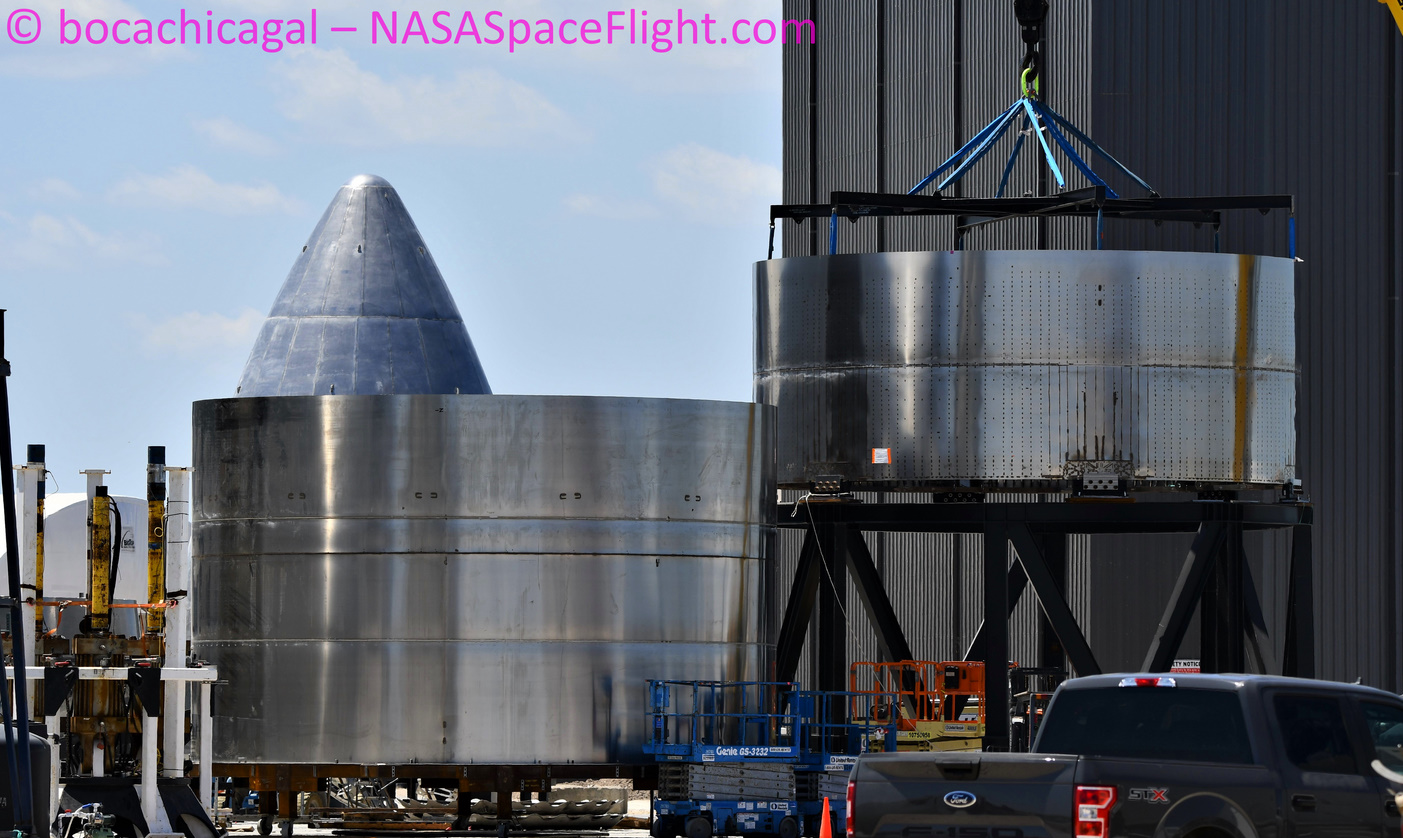 SpaceX CEO and Chief Designer Elon Musk noted this tank will be pushed to failure.

With this test tank made from the 304L (or similar) alloy, along with robotic welding techniques, the role of 7.1 will be aid confidence in Starship SN8, which is also made from 304L steel.

SN8 is the Starship prototype that is causing the most excitement within the community, given this vehicle will be the first to gain a nose cone and aero surfaces.

With the installation of three Raptor engines, this vehicle’s test will far exceed the hops of Starshopper and SN5/SN6, with flights up to 20KM on the books.

Although there is a likelihood this vehicle will first fly to a much lower altitude, the 20KM target is the ultimate milestone altitude for this vehicle, allowing for the sporty “bellyflop” return, before the Raptors swinging the aft vehicle for a touchdown on the landing pad.

For now, SN8’s sections are being stacked inside the Mid Bay next to SN5, with the completed tankage section expected to be fully mated in the coming days.

It is yet to be seen if SN8 will roll to the launch site like previous Starships, or as a competed stack with the nosecone. It is more likely the two sections will independently take road trips on the Self-Propelled Modular Trailers (SMPTs) “Roll Lift” – for stacking at the launch site.

In yet another sign of SpaceX’s incredible production cadence at Boca Chica, sections of Starship SN9 have already been spotted out in the open.

SN9’s test plans are currently expected to mirror – or at least provide a back up to – SN8, not unlike how SN5 and SN6 will be tag-teaming their test objectives.

As seen with previous Starship production flows, the first assembly milestone revolved around the sheathing of the Common Dome outside of one of the “Big Tents”, which themselves hold secrets to the true cadence of the production line.

Occasional photos from Elon Musk have shown numerous bulkheads being produced inside these large buildings, with the likelihood that domes for SN10+ are already being produced.

Speaking of SpaceX’s future vehicles, the facility that will host the stacking of the Super Heavy booster is nearing its full height. 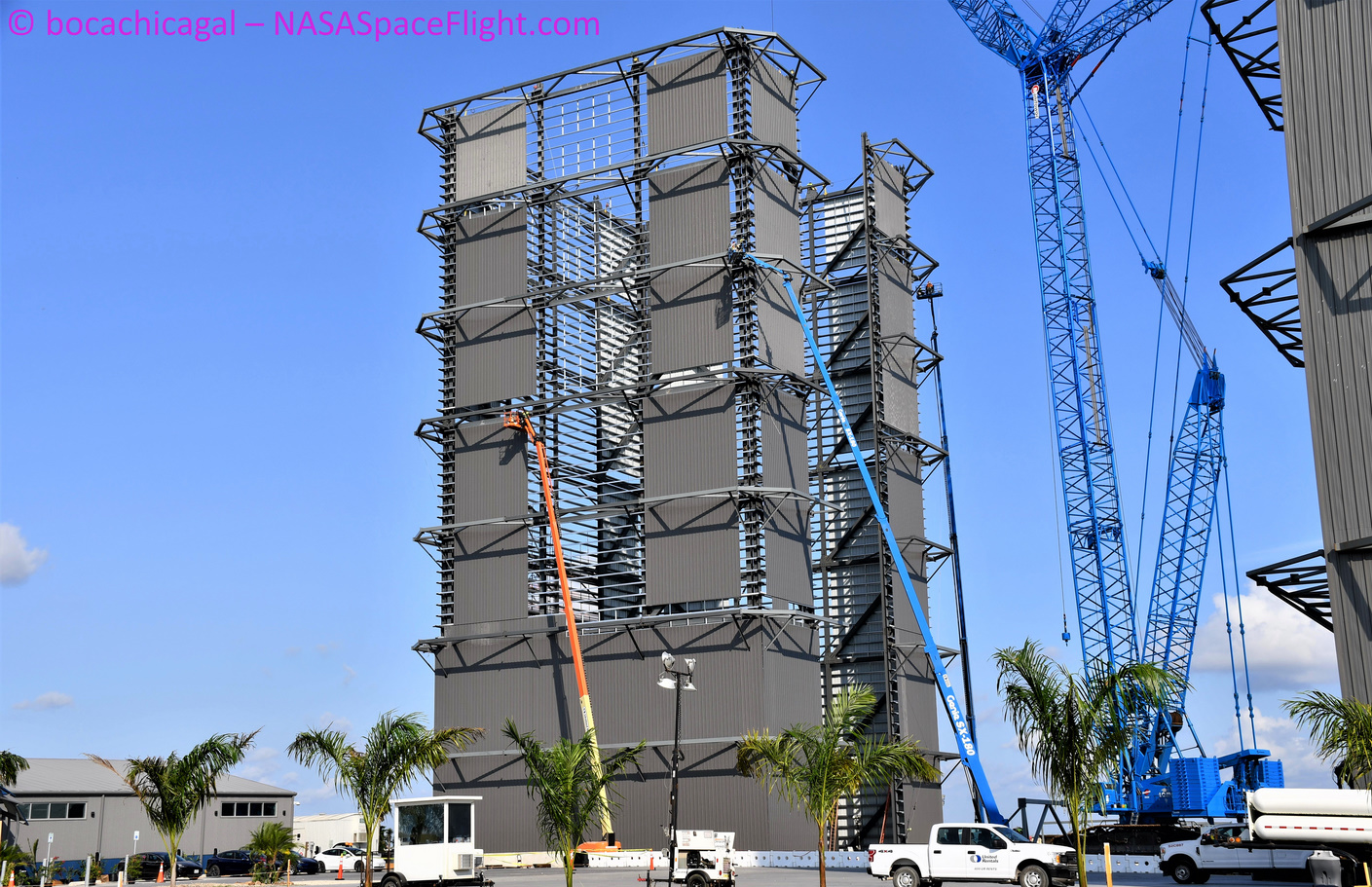 The current status of the High Bay this weekend – Photo: Mary (@bocachicagal)

The 81-meter tall building is past level 3 of its assembly phase, aided by the huge crawler crane lovingly nicknamed “Bluezilla”. However, work past the third level has involved walls half the size of the previous installations, pointing to the final sections yet to be added for topping off for the roof level.

Out at the launch site, progress continues to be made on the “Orbital Launch Pad” facility that is expected to host the first Super Heavy rocket. 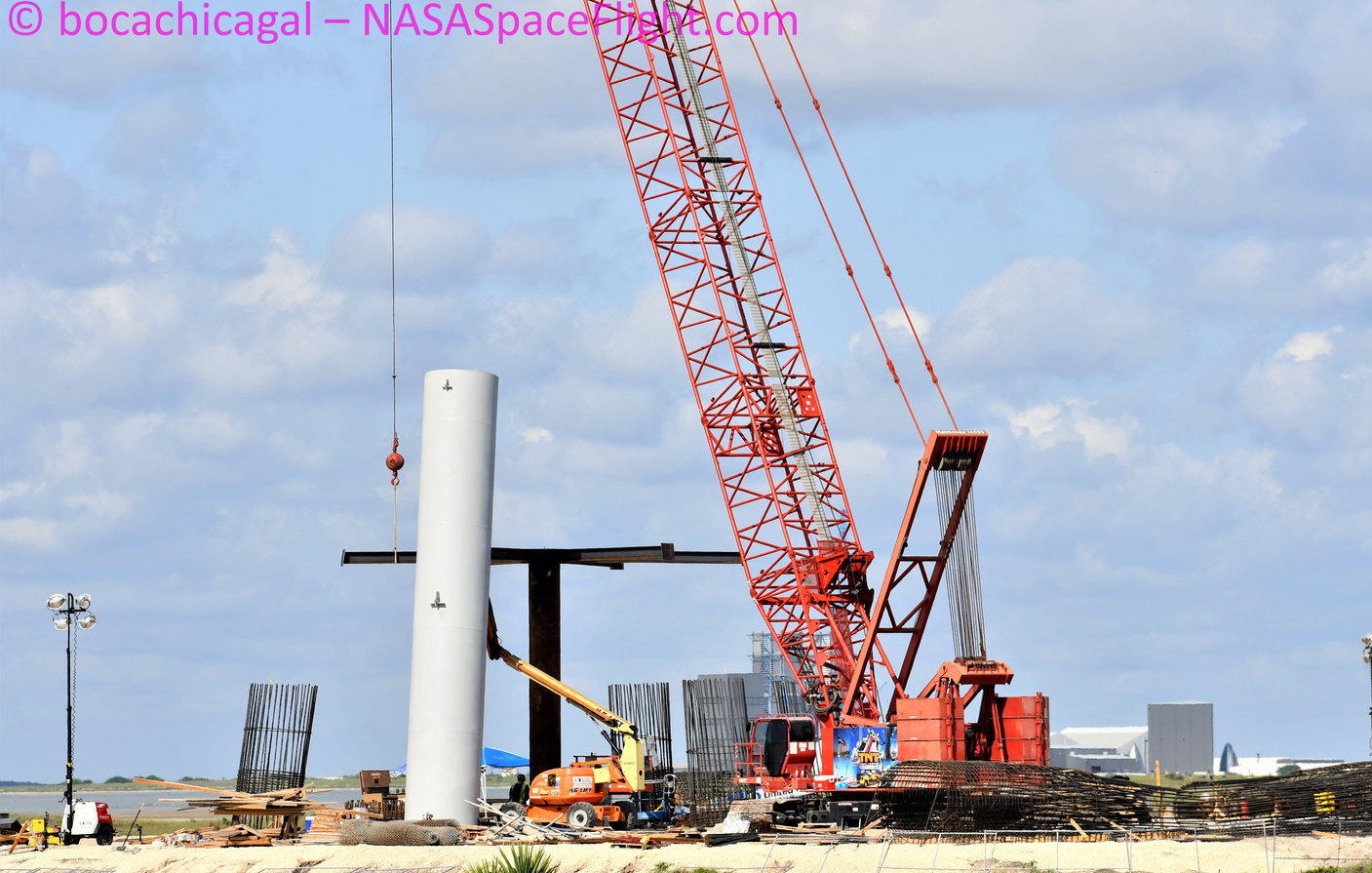 The central column/cross supports and first pillar – via Mary (@bocachicagal)

Although there continues to be disagreement within the community as to what the current construction is related to, from a water tower to a launch mount, the latter continues to be favorite via the information provided to this site.

The current view provides some clues into the potential of a six-sided flame deflector below an eventual mount that will host the booster.