Study: Coronavirus May Have Hit Los Angeles In December, Before Wuhan Outbreak Was Reported – Forbes

Covid-19 may have begun to spread in Los Angeles as early as December 2019, according to research from UCLA and the University of Washington, before the World Health Organization even knew about the initial outbreak in Wuhan, China. 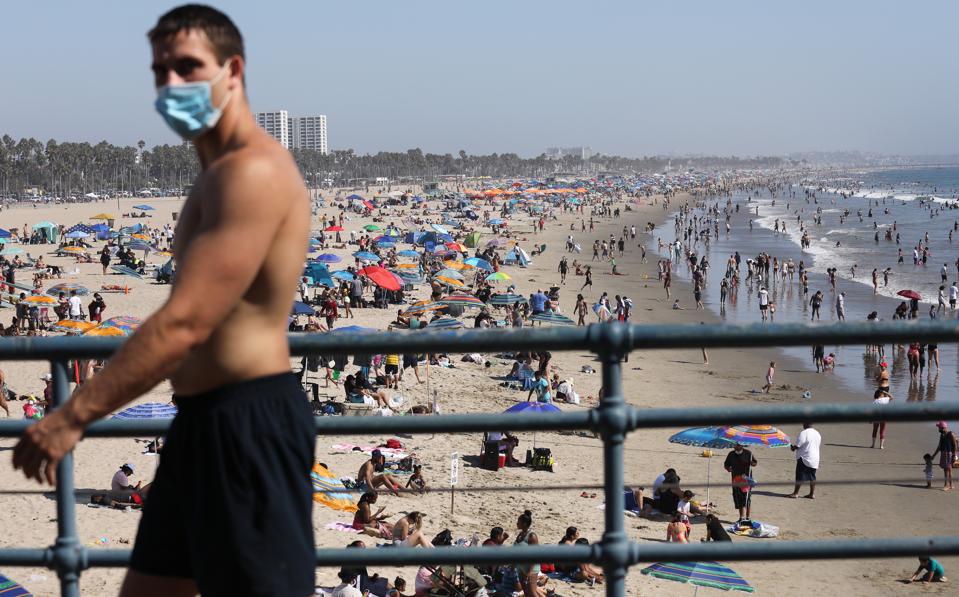 A man wears a face covering at the pier on the first day of the Labor Day weekend amid a heatwave on … [+] September 5, 2020 in Santa Monica, California.

Through analyzing medical records, researchers detected an unexpected increase in patients seeking treatment for respiratory illness beginning the week of December 22, and continuing through to the end of February, which they believe may be a sign that Covid-19 arrived earlier than previously thought.

The number of outpatients seeking care for coughs at UCLA clinics over that span increased by over 50%, exceeding the average annual number of visits for this complaint from the past five years by over 1,000.

There was a similar uptick in the number of patients treated at emergency rooms for coughs, as well as those hospitalized with acute respiratory failure during this time.

“A significantly higher number of patients with respiratory complaints and diseases starting in late December 2019 and continuing through February 2020 suggests community spread of SARS-CoV-2 prior to established clinical awareness and testing capabilities,” wrote the authors in the conclusion of the study, published in the peer-reviewed Journal of Medical Internet Research, adding that because many coronavirus carriers don’t show symptoms of the virus, its presence in L.A. in December could’ve been far larger than those numbers suggest.

The researchers waded through a vast amount of data from over 9.5 million outpatient clinic visits, nearly 575,000 emergency room visits and 250,000 hospital admissions to find patients complaining of a cough.

However, the researchers warn their findings aren’t definitive, as they did not conduct any diagnostic tests and other factors, including an increase in influenza cases and lung injuries from e-cigarettes, and the broadness of their search for patients reporting “coughs” may have played a role (though vaping has been on the decline since September 2019).

Dr. Steffanie Strathdee, the associate dean of Global Health Sciences at the University of California San Diego’s Department of Medicine and author of The Perfect Predator, said the data suggests the coronavirus was present in L.A. earlier than previously known. “The data are suggestive, but imply the answer is yes,” she said, adding: “There’s no way to be sure, though, because specimens weren’t collected and stored at the time that could be tested later, because Covid-19 wasn’t on our radar until February 2020.”

Less persuaded is Dr. Stanley Perlman, a professor in the University of Iowa’s departments of Microbiology and Immunology, and Pediatrics, who called the findings “very speculative and potentially inflammatory.” “There is no evidence of SARS-CoV-2 infection in this study,” he told Forbes. “It is based entirely on people in the ER with coughs and in numbers of cases with respiratory disease admitted to the hospital. These data do not support the conclusion, in my opinion.”

This is not the first study to suggest the virus made headway in the United States earlier than previously known. The first official coronavirus case was reported and acknowledged by the Centers for Disease Control and Prevention in Washington State in mid-January. The Wuhan Municipal Health Commission reported a cluster of cases of pneumonia in the city on December 31, according to the WHO. The cases were later linked to the novel coronavirus.

What To Watch For

The usage of electronic health records and health system data, as used in this study, could become vital in indicating when a new disease or outbreak might be occurring. “If these kinds of analyses are done in real-time in the future, we stand a better chance of being ahead of the next pandemic, instead of behind it,” said Dr. Strathdee.