There’s a widespread perception — shared by both Democrats and Republicans — that GOP voters are far more motivated by a desire to control the judiciary than Democrats. It’s the reason why Senate Majority Leader Mitch McConnell claimed, somewhat hyperbolically, in a 2019 address to the Federalist Society that “the single biggest issue that brought nine out of 10 Republican voters home to Donald Trump … was the Supreme Court.”

It’s also the reason President Trump bragged, falsely, that he’s appointed “more than 300 federal judges” in his speech at the Republican National Convention (in reality, the number is closer to 200), while Democrats barely mentioned the courts at all at their convention the previous week.

But a recent poll by the Pew Research Center suggests that this perception that judicial politics favor Republicans is outdated. Pew asked Democratic and Republican voters which issues are “very important” to their vote in the 2020 presidential election. In their poll, 66 percent of Democrats and only 61 percent of Republicans named “Supreme Court appointments.” 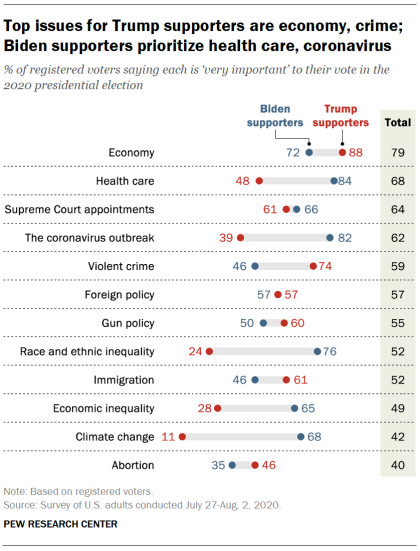 By comparison, a similar poll from Pew taken in the summer before the 2016 election found that Trump supporters were 8 points more likely to view Supreme Court appointments as “very important,” as compared to Clinton voters.

Democrats’ new interest in the judiciary feels a lot like latching the barn after the horse has escaped. In 2016, Justice Antonin Scalia’s death gave Democrats their first opportunity to build a Supreme Court with a liberal majority since President Richard Nixon appointed four justices and began that Court’s decades-long march to the right.

But Senate Republicans, led by McConnell, held Scalia’s vacant seat open for more than a year until Trump could fill it with Justice Neil Gorsuch in 2017. Then, in 2018, the relatively moderate conservative Justice Anthony Kennedy retired, and he was replaced by a hard-line conservative, Justice Brett Kavanaugh.

There are many reasons why Democrats missed their chance to reshape the Court in 2016. The biggest one is Senate malapportionment. In 2016, when Republicans blocked Obama Supreme Court nominee Merrick Garland, Democratic senators represented about 20 million more people than their Republican counterparts. Republicans owed their majority to the fact that small red states like Wyoming receive exactly as many senators as large blue states like California — even though California has 68 times as many people as Wyoming.

But Democrats do bear some responsibility for the GOP’s dominance of the Supreme Court. In the 2014 midterms, turnout was just 36.3 percent — the lowest level of voter turnout in 72 years. Republicans picked up nine Senate seats in that election, and with them, the power to keep Garland off the Supreme Court.

As my colleague Ezra Klein wrote shortly after Kennedy’s retirement, “I remember covering the 2014 election, and the narrative was that it just didn’t matter. Barack Obama had won reelection in 2012 and gotten filibustered on virtually everything he tried.” But the 2014 election mattered a great deal: “Turns out the Supreme Court was the point.”

If Democrats had turned out at higher rates in 2014, Garland could be the swing vote on the Supreme Court right now, and a wide range of Trump policies — from the travel ban to the asylum ban — would likely be off the table. Even more importantly, we would not have a Supreme Court that is often actively hostile to the right to vote.

But the new Pew poll suggests that Democrats are beginning to wake up to the fact that a Republican judiciary is an existential threat to much of the Democratic Party’s agenda, and, as a result, they are beginning to prioritize it.

Millions turn to Vox each month to understand what’s happening in the news, from the coronavirus crisis to a racial reckoning to what is, quite possibly, the most consequential presidential election of our lifetimes. Our mission has never been more vital than it is in this moment: to empower you through understanding. But our distinctive brand of explanatory journalism takes resources — particularly during a pandemic and an economic downturn. Even when the economy and the news advertising market recovers, your support will be a critical part of sustaining our resource-intensive work, and helping everyone make sense of an increasingly chaotic world. Contribute today from as little as $3.