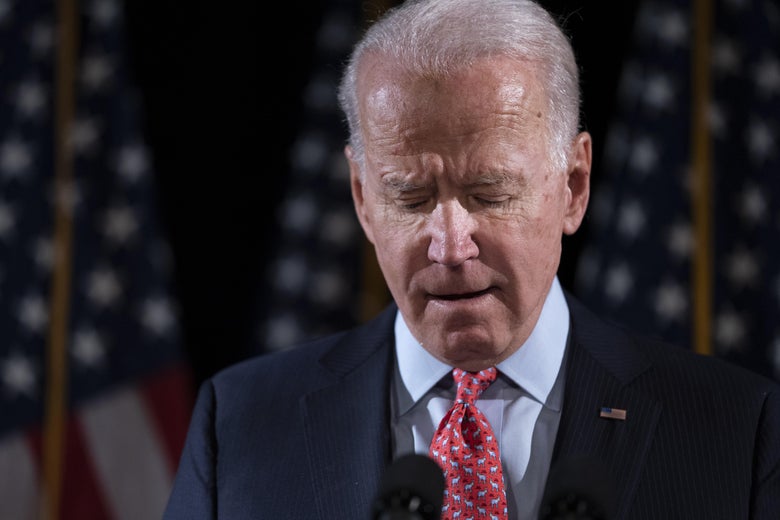 On Friday, the New York Times reported that attorney Douglas Wigdor would no longer be representing Tara Reade, who has accused presumptive 2020 democratic presidential nominee Joe Biden of sexual assault.

Wigdor said in a statement that the decision is “by no means a reflection on whether then-Senator Biden sexually assaulted Ms. Reade.” The move comes, however, following a series of investigative reports questioning Reade’s general credibility or weakening the previous corroboration of the alleged attack.

Last year, Reade was one of seven woman who accused Biden of touching them in ways that made them feel uncomfortable. Specifically, Reade told a local newspaper that while she worked in Biden’s Senate office in 1993, “he used to put his hand on my shoulder and run his finger up my neck.” Then last month, beginning in a podcast interview with Katie Halper, Reade went public with a claim that Biden had cornered her in a “semiprivate area like an alcove” somewhere between the Senate office building and the Capitol building, pushed her against a wall, forcibly kissed her neck, and then penetrated her with his fingers. Reade also said she was forced out of her job due to the harassment she experienced in Biden’s office, and that she had filed a formal complaint at the time.

Biden adamantly denied the claim. The New York Times and other major outlets followed up on Reade’s account and reported that her brother and a friend, who sought to remain anonymous, had corroborated her story. More inquiries turned up more evidence consistent with Reade’s account, including video of an episode of Larry King Live on CNN in 1993, in which Reade’s mother called in and said “my daughter has just left [Washington], after working for a prominent senator, and could not get through with her problems at all.” It was also soon after reported that her ex-husband during divorce proceedings in 1996 had filed a court document saying that Reade had experienced “sexual harassment” while working in Biden’s office.

Finally, Rich McHugh published a piece in Business Insider in which a former neighbor of Reade’s said she recalled Reade telling her about the assault when they were living in the same apartment complex in the mid-’90s. In that story, a former colleague of Reade’s in the California State Senate also recalled Reade telling her that she had been harassed by her boss during her time working in Washington D.C.

All of this information, which came out over the course of April and early May, seemed to support the claim that Reade was assaulted by Biden. This month, though, other reporting has come to light that has piece by piece, and with varying degrees of persuasiveness, challenged Reade’s general credibility or specific elements of the statements of her corroborating witnesses.

As in previous cases, some of that reporting seemed as though it had come from an old playbook of tarnishing victims of sexual harassment and assault by raising unrelated financial difficulties in their lives or what seemed like relatively minor squabbles with personal acquaintances. Reporting by Politico and the Associated Press depicted Reade as having left a trail of acquaintances who had felt they had been conned by her. However you value these stories of a half-dozen acquaintances who claim Reade lied to them or bilked them out of money, though, other reporting found inconsistencies in Reade’s story or in the corroborating witness accounts that directly bear on her claim against Biden.

On May 7, Laura McGann at Vox described how she had for months struggled to report out Reade’s story. In one particular challenging element, McGann noted that an anonymous corroborating witness had initially independently and explicitly volunteered to McGann that Biden “never tried to kiss [Reade] directly. He never went for one of those touches.” That friend now claims that Reade had told her of the assault and the forced kissing in 1993 at the time it happened. When McGann asked the friend why she had told McGann the opposite, the friend said “it just organically rolled out that way” and she “did not want to betray” Reade’s confidence.

On May 15, Daniel Bush and Lisa Desjardins of the PBS Newshour published a report based on interviews with 74 former Biden staffers, 62 of which were women. Some of their responses were just testimonials to their belief in Biden’s character, but multiple sources disputed specific facts in Reade’s account. One of Reade’s former colleagues, Ben Savage, went on the record directly contradicting Reade’s claims that her job duties had been diminished because of the assault and harassment claim, telling PBS that “Reade had been mishandling a key part of her job and an essential office task—processing constituent mail, something they worked on together” and that “he recalls reporting these issues to his boss, deputy chief of staff Dennis Toner,” after which the office “began diminishing Reade’s duties, taking over some of her tasks and rerouting parts of the process to exclude her.” (Reade declined to be interviewed by PBS.) Fifty of the former staffers specifically challenged Reade’s claim that she had been asked to serve drinks at a Biden fundraiser—a request that she said contributed to a pattern of harassment—noting that Biden’s staff was prohibited from doing campaign work and that none of them recalled him holding fundraisers in Washington D.C. On the subject of the attack itself, staffers also noted that there were no “private” areas in the Senate office building and that if the attack occurred where she described it happening, it would have been a “brazen attack in an area with a high risk of being seen.”

On Tuesday, CNN’s MJ Lee and Ellie Kaufman reported that Savage recalled Reade saying she had been fired for medical reasons. Reade’s anonymous friend also gave CNN a new explanation for the false statement to Vox, saying what she’d meant was that Biden hadn’t tried to kiss Reade in front of staff.

It is also worth noting that Reade’s strongest corroborating witness at the time it was reported appeared to be her former neighbor Lynda LaCasse, who seemed to offer independent, near-contemporaneous corroboration of the full assault claim on the record in her conversations with Business Insider. Unfortunately, that piece failed to include in its initial round-up one key detail that was published alongside the article in an interview transcript that was behind a paywall: LaCasse only remembered her conversation with Reade after she was reminded of it during a phone call with Reade.

Meanwhile, the reporting on Reade’s overall credibility has had results beyond the question of what may have happened between her and Biden. CNN’s reporters, for instance, found that Antioch University denied Reade’s claims that she had received a bachelor of arts degree from the school and that she had been a visiting professor there.

On Thursday, the New York Times further reported that public defenders in California were seeking to challenge convictions in which Reade had been an expert witness based on the possible falsification of her credentials. In addition to allegedly misrepresenting her educational background, Reade also told courts that she was a “legislative assistant” in Biden’s staff, when in fact she had been a more junior staff assistant. In at least one case, public defenders had raised objections to Reade’s testimony, because of skepticism that she was qualified to be an expert, the Times reported, but were overruled by the judge in the case. Reade once testified in court that she had been an expert witness in more than 20 cases. Attorneys in some of those cases are now seeking to challenge convictions on the basis of Reade’s apparent false statements about her credentials.

For more of Slate’s news coverage, listen to What Next.