Tattoo artist tries his hand at different kind of ‘flesh’ 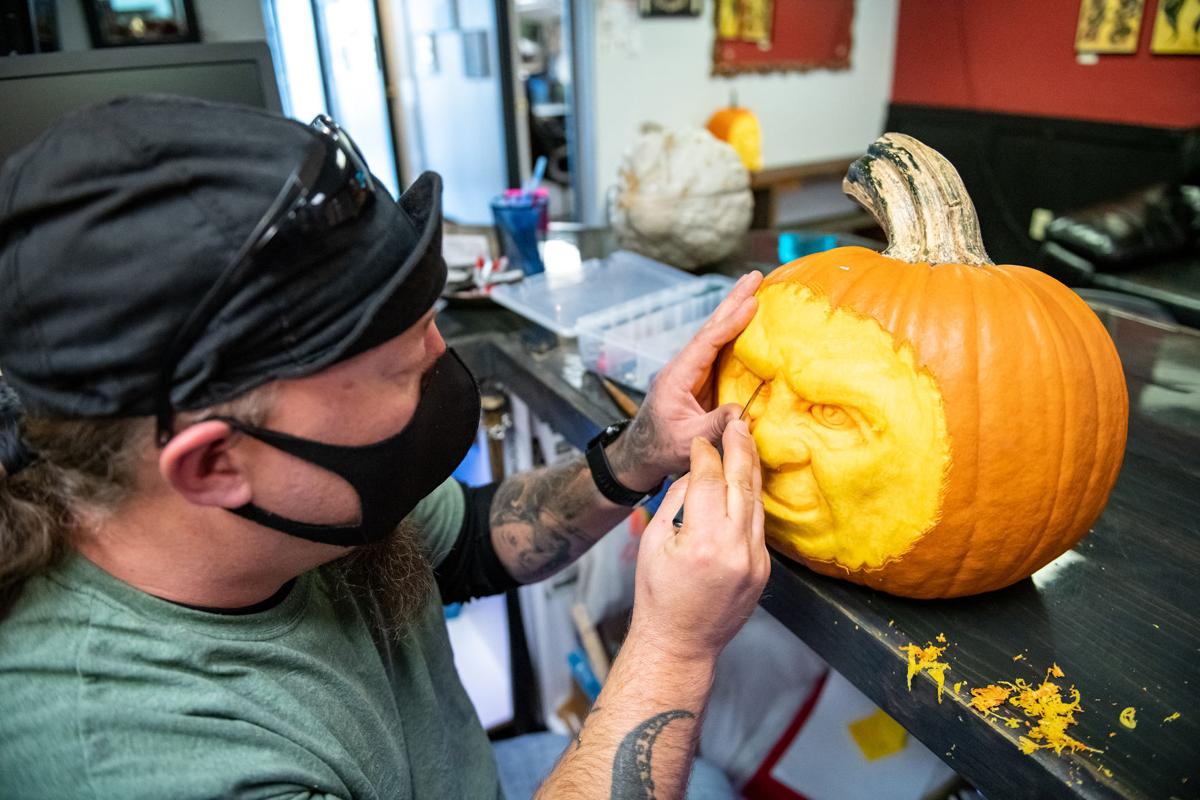 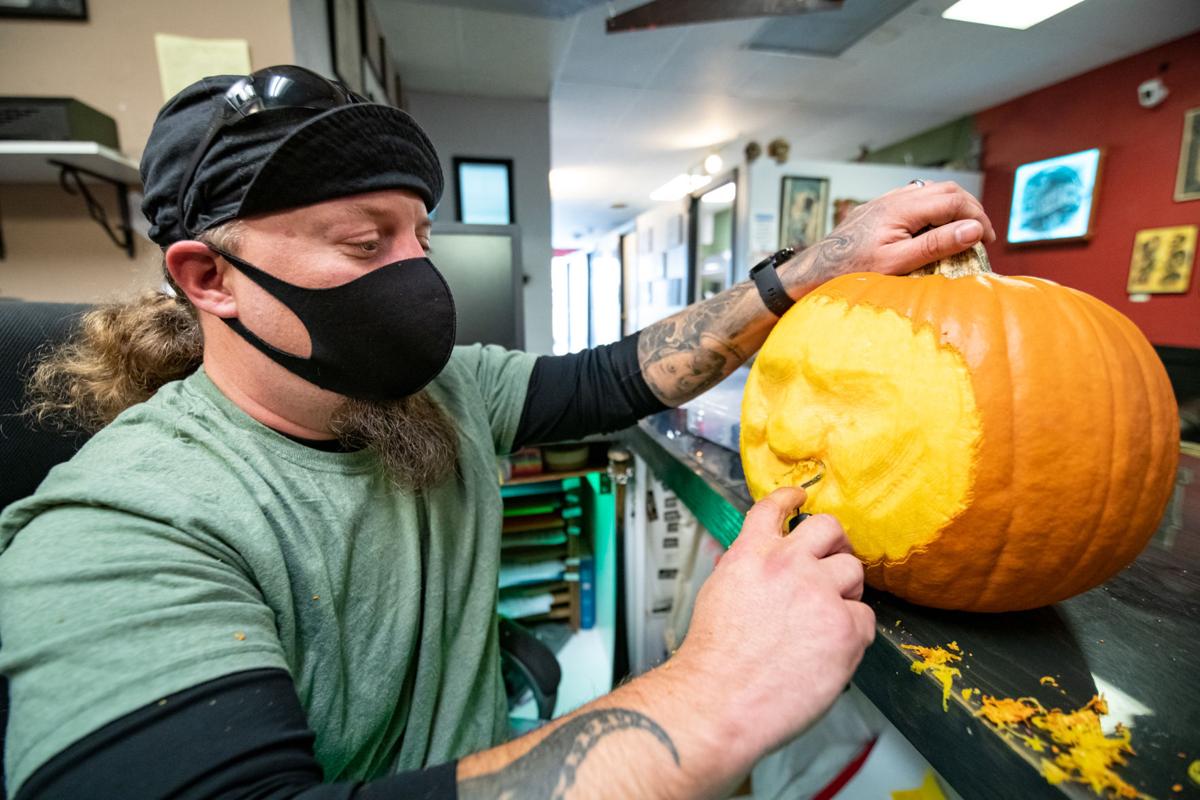 Tattoo artist Luke Schroder carves a face in a pumpkin for Halloween, Wednesday, at Addictive Tattoo in Sioux City.

Or they look like the late Chicago Cubs announcer Harry Caray, revving up seventh inning attendees with a rousing rendition of “Take Me Out to the Ballgame.”

However, the head Schroder is working on bears no similarities to either Moranis or Caray.

“Nah, this guy is gonna be creepy and old and have a mischievous look in his eye,” he said, creating art in real-time. “Every pumpkin has a personality, and this guy has to be creepy.”

For more than a decade, Schroder has been using pumpkins as a unique canvas for his work. And no, don’t confuse what he does with any Jack-o’-Lantern you make every Halloween.

Instead, he has trained with famed 3-D sculptor Ray Villafane, whom has been dubbed the “Picasso of the Pumpkin.”

“I call Ray my ‘sensei’ out of respect,” Schroder explained. “He’s the master.”

Well, Schroder is no slouch, himself.

Not only does he utilize pumpkins as a fleshy canvas, he’s also uses other gourds like squashes and zucchinis or, even things like radishes and rutabagas.

He will then turn them into humans, animals, space aliens, zombies, you name it.

According to tattoo artist-turned-pumpkin sculptor Luke Schroder, the best gourds are the ones that feel solid to touch. Schroder sells many of his creations. Others are used as auction items for nonprofit fundraisers.

Creating art out of edible objects is actually a sideline for Schroder, who is a fulltime tattoo artist at Addictive Tattoo.

So, he trades human flesh for pumpkin flesh all for the sake of art, right?

“In a way,” Schroder said. “The difference is that tattoos are art you take to the grave. Pumpkins, on the other hand, are anything but permanent.”

Still, they’ll last a few weeks if you choose a good gourd.

“If you thump ’em and they sound solid, you got a good pumpkin,” Schroder said.

Sioux Cityan Luke Schroder said horror movies and metal music has both his tattoo and his pumpkin art.

Indeed, Schroder became something of an expert when picking posable produce. He can make more than 50 3D pieces, in various shapes and sizes, every Autumn.

Many will go as auction items like during Camp High Hope’s annual “Haunted Lodge” fundraiser, while others are sold to art lovers who can also appreciate a good ghoul.

Schroder certainly belongs in that category. A fan of the macabre since childhood, he began drawing in school and never stopped.

“I was a kid who loved movies like (John Carpenter’s 1982 cult favorite) ‘The Thing’ and listening to heavy metal music like Metallica,” he said. “Both movies and music have influenced my art.”

Schroder considers himself blessed to be able to make a living as an artist.

Tattoo artist Luke Schroder holds a pumpkin that he carved for Halloween, at Addictive Tattoo in Sioux City.

Actually, Schroder stays so busy during the month of October, his wife calls herself a “pumpkin widow.”

“Even though she doesn’t see me around much, but my wife loves it when I bring home pumpkins,” he explained. “My wife loves cooking them while I love carving them. We compete over who gets a best pumpkin.”

Somehow, we think Schroder wins out during this pumpkin war. Depending on the size of the gourd and the complexity of the design, he may spend up to four hours on a single sculpture.

Plus he’d like to start teaching art classes for the next generation of 3D pumpkin artisans.

Tattoo artist Luke Schroder carves a 3D face into a pumpkin for Halloween, Wednesday, at Addictive Tattoo in Sioux City. Schroder said a pumpkin’s shape sometimes dictates the type of face. A skinny pumpkin lends itself to something sinister-looking. A round pumpkin can lend itself into a more jocular Jack-O’-Lantern.

Until then, Schroder is satisfied simply by being a practitioner of seasonal sculptures.

Despite that, making 3D pumpkin sculpture doesn’t have to be too exact.

“If I end going too far in making an eye socket, I’ll turn an old man sculpture into an one-eyed alien,” Schroder said.

And if he accidentally lops off an ear on one of his pumpkin design? Well, then, Pumpkin Rick Moranis will just have one ear.