The scion of one of the world’s most privileged families, he wrapped himself in the trappings of royalty, wealth and a comfortable hideaway thousands of miles from his subjects.

For Thailand’s King Maha Vajiralongkorn, the cocoon has come undone with remarkable speed.

Last week in Berlin, the German government faced questions in Parliament over the king’s legal status in Bavaria, where he resides. Foreign Minister Heiko Mass said that if the king were making decisions affecting Thailand from German soil, “We would quite clearly not stand for that.”

Then, visiting Thailand this week to mark the fourth anniversary of his father’s death, the king’s family came face-to-face with pro-democracy protesters agitating for limits on his power. At one point, demonstrators confronted the queen’s motorcade and hurled insults at her cream-colored Rolls-Royce.

In a country where criticizing the king or his family is punishable by up to 15 years in prison, the dramatic scenes in Bangkok provided the starkest illustration yet of the crisis facing Thailand’s constitutional monarchy and the military-led government that supports it.

“The bubble that protected them from reality is bursting, without a doubt, and in a very graphic way,” said Pravit Rojanaphruk, senior staff writer with the Khaosod English news site. 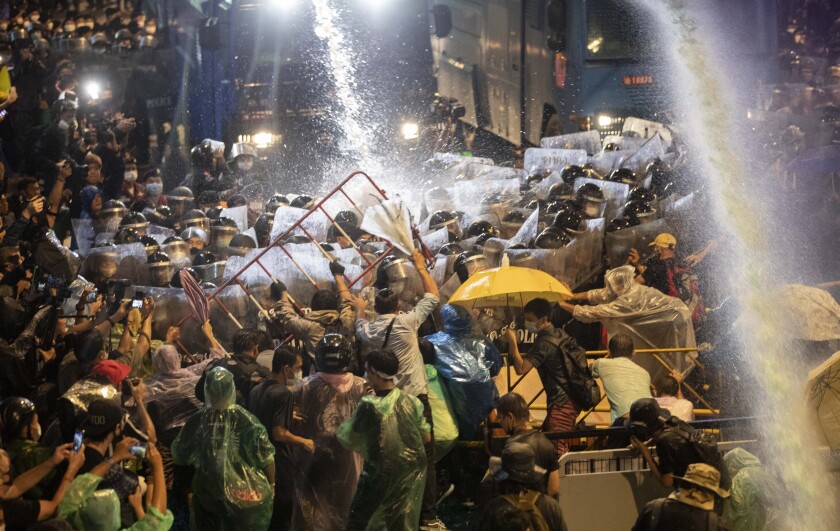 Police use water cannons to disperse pro-democracy demonstrators in Bangkok on Friday night.

After the skirmish with the motorcade Wednesday, authorities banned large gatherings, arrested more than 20 activists and charged two with violence against the queen, which carries a possible life sentence. Thousands defied the ban and rallied at a Bangkok intersection Friday evening until police in riot gear dispersed the crowd with batons and water cannons.

As the months-long protest movement continues, the reverence long demanded of Thailand’s monarchy is breaking down in ways big and small. Thais are refusing to stand for the royal anthem in movie theaters, lampooning the king in Facebook groups and openly questioning his immense wealth and spending.

The scrutiny he is now facing in Germany is an added nuisance for a 68-year-old king who has long treated his adopted home as a playground.

As the only son of King Bhumibol Adulyadej, who reigned for 70 years, Vajiralongkorn was destined to inherit the throne. But since about 2007 he has spent most of his time in Germany, where the tabloid press has followed his exploits with relish.

In the picturesque southern state of Bavaria, Vajiralongkorn, who has been married four times, is said to have purchased a villa near pristine Lake Starnberg in the town of Tutzing in 2016. He reportedly spends time there and at a four-star Alpine hotel in Garmisch-Partenkirchen that he rents out entirely for his entourage, including what one newspaper described as “hundreds” of servants.

The Sueddeutsche Zeitung in Munich reported earlier this year that the king has “acquired an abiding fondness” for the rugged Bavarian foothills.

“He likes to pick strawberries, ride bicycles or visit one of the country inns after his tasters have tested everything first and his bodyguards have found the premises appropriate and safe,” the newspaper wrote.

As crown prince, he was known in Bavaria primarily for his eccentric tastes. He was pictured wearing a tight-fitting crop top over an otherwise bare torso while getting on a ski lift, and covered in temporary tattoos during an excursion to a Munich mall.

Since he assumed the throne upon his father’s death in 2016, King Vajiralongkorn’s stay in Germany has become more controversial.

He amended the Thai constitution to allow himself to rule from abroad without appointing a regent, as past monarchs did during long stints outside Thailand. After taking personal ownership of the estimated $70-billion crown fortune, he broke with custom by intervening directly in Thai politics — barring his popular sister from running for office in 2019 elections, the first since a 2014 military coup. 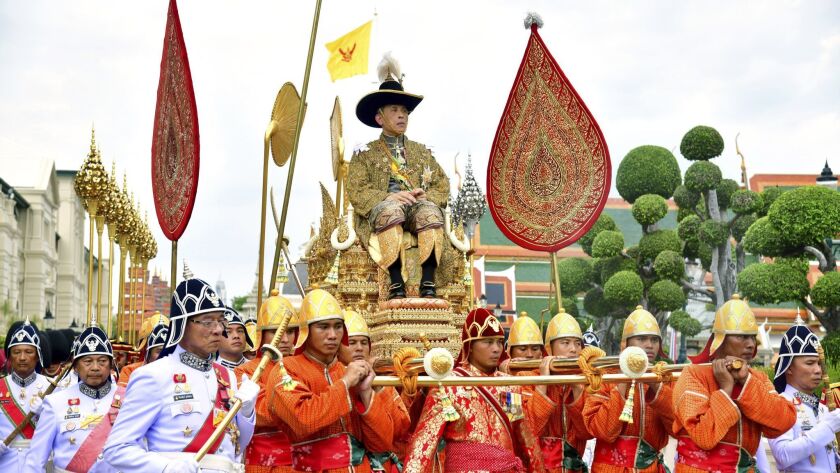 Royal bearers carry King Maha Vajiralongkorn on a palanquin during his 2019 coronation.

“His authority is much greater than past monarchs, and he has exercised it very shamelessly since he ascended the throne,” said Junya Yimprasert, a Thai activist who was charged with insulting the monarchy in 2010 and went into exile in Finland.

She has organized several protests in Germany, including outside the hotel in Garmisch-Partenkirchen in September, when she said members of the king’s entourage tailed demonstrators in a car and took their pictures.

When they reported the harassment to local police, she said officers told her this was the king’s “normal practice.”

Activists and local media have raised questions about the king’s tax status in Germany, as well as whether the government approved his hotel stay while the rest of Bavaria was closed to tourism during a COVID-19 lockdown in the spring.

Last week in the Bundestag, a member of the opposition Greens party asked Maas, the foreign minister, whether the government approved of the king making policy decisions about Thailand from Germany.

“Why has the German government been tolerating for many months this extremely unusual and, in my view, illegal behavior in Germany by a foreign head of state?” asked the lawmaker, Frithjof Schmidt.

Maas responded that he was “aware of the many bizarre reports about what is happening there,” but that the government’s position was firm.

“We have made it clear that policies concerning Thailand should not be conducted on German soil,” he said. 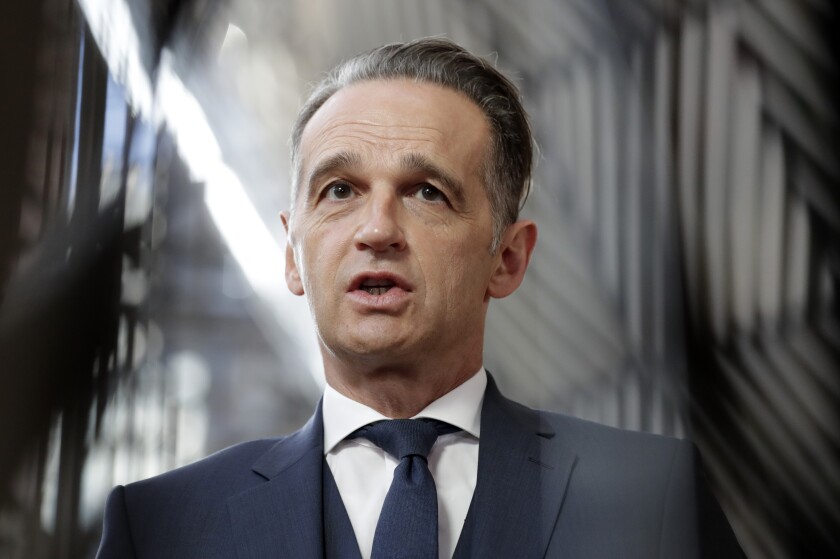 German Foreign Minister Heiko Maas said his government would “not stand” for Vajiralongkorn making decisions about Thailand from his residence in Bavaria.

In an interview, a Greens member of Parliament in Bavaria, Tim Pargent, said the party’s inquiries have established that the king was not in Germany as a diplomat, and is therefore bound by German laws and tax codes.

“If he likes living in Germany, that’s quite clearly his right,” Pargent said. “But what I want to avoid is [that] a despot who isn’t treating his own people very well gets any kind of special protection here in Germany. He should be treated like everyone else.”

In Thailand, where past democracy movements have been suppressed with bloody force, the government has been reluctant to use such tactics against the largely student-led protests. For months, Prime Minister Prayuth Chan-ocha said the government would consider calls to amend the constitution, but warned that the monarchy must be respected.

But many demonstrators appear to believe that Thailand’s political system cannot be reformed without trimming the sails of the monarchy, which has seen its share of the public budget grow while economic inequalities worsen and the country faces a wrenching COVID-19 slowdown.

Frustration bubbled over Wednesday afternoon when the royal limousine — carrying Queen Suthida, the king’s fourth wife and a former flight attendant, and his son from a previous marriage, Prince Dipangkorn — turned onto a road near Government House, the prime minister’s office.

Pravit, the journalist, said about 200 protesters gathered there had not expected the motorcade to take that route. In video shot by Khaosod, one protest leader, college student Francis Bunkueanun Paothon, is seen speaking to police through a megaphone when a phalanx of black-clad officers suddenly pushed up against the crowd, clearing the road.

That was when the motorcade appeared. Many demonstrators flashed the three-finger salute that has become a protest trademark; others raised their middle fingers, yelled insults or chanted, “It’s my tax,” referring to the royals’ spending.

None got close to the car, and there was no damage. But on Friday, Bunkueanun stood outside a Bangkok police station and said he had been accused of intent to harm the queen, the most serious charge leveled against protesters since the demonstrations began.

Facing the prospect of life in prison, he wiped away tears but vowed to keep fighting “even if I have to risk it all.”

Michael Montesano, coordinator of the Thailand studies program at the ISEAS-Yusof Ishak Institute in Singapore, said protesters and the military were heading down a dangerous path of escalation. Prayuth told reporters Friday that he would not resign and issued a warning — “Do not challenge the Grim Reaper” — that some activists interpreted as a threat.

“This has become a genuine crisis,” Montesano said. “And the mechanisms for resolving the crisis, whether in terms of compromise or dialogue, don’t seem to exist.”