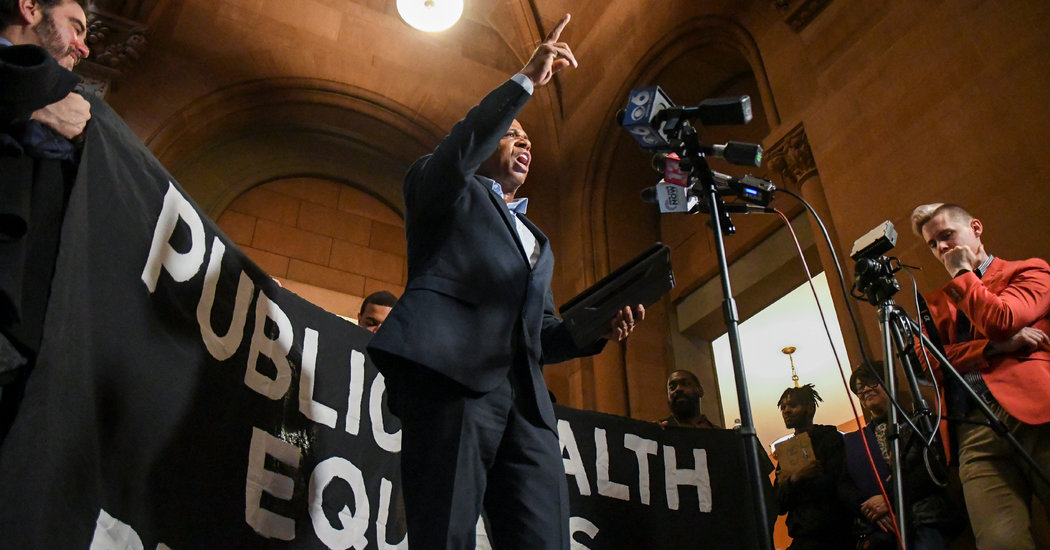 ALBANY, N.Y. — A serial bank robber who struck again four hours after he was released from custody. A wall of white faces in police uniforms, filling the State Capitol steps in protest. A protected witness bludgeoned to death.

These are some of the images and incidents that have been used in what has become one of New York’s most divisive political battles in years: a bitter, often racially tinged debate over the state’s new bail and discovery laws. Since the changes went into effect, law enforcement officials across the state have drawn attention to crimes committed by people freed without bail.

The battle has spread beyond the state’s borders, with Attorney General William P. Barr recently speaking against the new laws, which ended the use of cash bail in a vast majority of criminal cases.

The incessant pressure seems to have had an effect: Earlier this week, Democratic leaders in the State Senate circulated several proposed changes to the law, offering to give judges more discretion in deciding whether to keep accused criminals in jail.

Those proposals surprised and incensed members of the Democrat-dominated Assembly, exposing a schism in the party ranks, which just a year ago was reveling in big wins in the 2018 elections and a succession of long-sought progressive policies.

That era of good feelings seems to have dissipated.

“I don’t need any fake-ass legislators allowing fear-mongering,” Assemblyman Michael Blake, a Bronx Democrat, said at a raucous protest after word of the Senate plan emerged on Wednesday. “We will not go back on bail.”

For reformers, the changes to the bail law were long overdue and deeply important: The new law would mean that thousands of people in jail awaiting trial would be released, allowing them to return home, safeguard jobs and families and maintain stability in communities decimated by decades of incarceration.

With bail eliminated for most misdemeanors and nonviolent felonies, an estimated 90 percent of new defendants each year in New York would remain free as their cases move through the courts.

But opponents — including many police chiefs and county district attorneys — argued that the law was overly permissive and potentially dangerous, allowing the quick release of defendants on a variety of serious charges, including types of stalking, assault, burglary, drug offenses, arson and robbery.

Those opponents have helped funnel a parade of negative stories to the press about crimes allegedly committed by those released under the law. New York City tabloids have regularly featured cover stories of repeat perpetrators, including several anti-Semitic incidents, while upstate communities have been rattled by incidents such as a deadly accident that resulted in the death of a 9-year-old, in which the driver was released with a desk appearance ticket.

The rancor had been intensified by accusations that some opponents are deliberately misleading the public, exemplified by a case in Long Island last week: The Nassau County police commissioner, Patrick Ryder, initially blamed the death of a 36-year-old man in an MS-13 gang case, Wilmer Maldonado Rodriguez, on the changes to the law on discovery, rules about when the prosecution must turn over evidence to the defense. Under the new law, prosecutors must automatically turn over evidence, generally within 15 days of arraignment.

In the hours after Mr. Ryder’s statements, activists excoriated Nassau County officials for spreading misinformation and unfairly attacking the law. Mr. Ryder quickly retracted his assertion, saying there was “no direct link” between Mr. Rodriguez’s death and criminal justice reform.

Despite that, Attorney General Barr appeared to use the case on Tuesday to criticize New York’s criminal justice laws, telling a group of county sheriffs that “a member of the community” had been being “killed by an MS-13 member who was released under new legal reforms in New York.” A request for clarification from his office was not returned.

Supporters of the law were so concerned about the attention given to Mr. Ryder’s comments that they launched a six-figure television campaign on Long Island to call out Mr. Ryder’s actions.

“It’s time to stop the fear and misinformation,” the ad says. “We deserve better, we deserve the truth.”

Indeed, the opposition to the law has inspired its own fervent pushback, including aggressive online advocacy and the near-constant presence of grass roots activists in the Capitol. Groups like VOCAL-NY have bused hundreds of demonstrators to Albany, from all over the state, with a blunt message: We want more reforms, not fewer.

New Yorkers United for Justice, the coalition behind the Long Island ad, has spent more than $2 million to pass and defend the changes to the bail law, hiring A-list publicists and Albany lobbyists and investing in polling, media training and a “rapid response war room,” which bombards journalists and elected officials on Twitter and through emails after sensitive articles appear.

Still, they admit they are battling critics with bigger platforms to voice their message, which also has the benefit of using the potent political weapon of public safety fears.

“All of this is a snowball,” said Khalil Cumberbatch, the chief strategist for New Yorkers United for Justice, adding that his group’s goal is to “undercut, at the root, where the misinformation is coming from.”

But, he added, “its very hard to put that lightning back in a bottle.”

The outrage, real or political, has spilled over in unrelated events like a gunman’s recent attack on police in the Bronx, or the rape and murder of a 92-year-old woman in Queens last month. After the Bronx attack, for instance, Mr. Flanagan said, “We must condemn not only the attempted assassinations of law enforcement, but of Democrat, anti-police rhetoric and policies that fuel police hatred.”

Democratic leaders have pushed back, but fear of potential political damage to moderate lawmakers on Long Island seemed to undergird the new Senate proposal, which was reported in Newsday.

Under it, the state would completely eradicate cash bail and set a roster of serious crimes and circumstances under which judges could still jail defendants; those accused of almost all misdemeanors and nonviolent felonies would continue to be exempt. But judges would be given the discretion to jail persistent offenders and those deemed likely to harm someone.

“We’ve talked to the people on the front lines, in law enforcement, and we want to give them the tools to do their jobs,” said Todd Kaminsky, a Democratic state senator and former federal prosecutor from Nassau County. “And we believe when you take wealth out of the system, which this does, you create a fairer system where that can occur.”

The Senate’s proposal was not received warmly by Assembly leadership, who noted that the law had only been in effect for six weeks.

“I think in order to ascertain whether any law that is a transformational change is working, you need real data, real information,” said Carl Heastie, the Bronx Democrat who serves as Assembly speaker. “Not cherry-picked stories and sensationalized events.”

Other supporters have suggested that the opponents of the new law are racially motivated, noting that a Facebook page devoted to repealing the law has been peppered with anti-immigrant sentiment and offensive comments about lawmakers from minority groups.

Some also accuse prosecutors of missing the leverage they held in the old bail system.

“We have implemented a new law that will change the lives of black and brown and poor people all across the state,” said Stanley Fritz, the state political director for Citizen Action, a government reform group, said at a recent rally outside the Senate chambers. “And all of the sudden, district attorneys can’t just force somebody to sit in a cell because they can’t afford their bail and then push them to plead out on some garbage.”

Activists have also been frustrated by the critiques and some of the critics, including the New York City police commissioner, Dermot F. Shea, and particularly Mayor Bill de Blasio, a staunch liberal.

The mayor has said that he broadly supports most of the changes, but he believes that judges should be given some discretion in deciding when to keep criminal defendants in jail.

“Even the best pieces of legislation sometimes have unintended consequences that need to be assessed and acted on,” Mr. de Blasio said earlier this week. If judges were given some leeway in a limited number of cases, the mayor said it “could protect the community against violence, and that’s got to be the first consideration.”