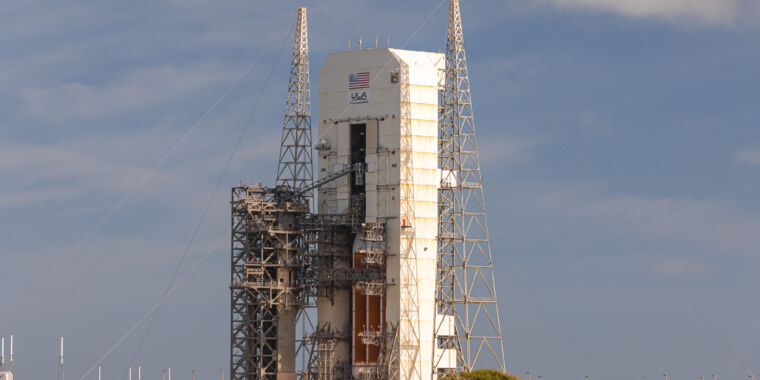 Is anyone ready to see a heavy-lift rocket take flight? Especially one that creates a giant fireball mere seconds before liftoff?

United Launch Alliance’s largest booster, the Delta IV Heavy, has not launched since January, 2019. Now the big rocket—the second-most-powerful launch vehicle in the world after SpaceX’s Falcon Heavy—is back on the pad to loft a classified payload for the National Reconnaissance Office.

Liftoff of this “NROL-44” mission is scheduled for 2:12am EDT (06:12 UTC) on Thursday from Space Launch Complex-37 at Cape Canaveral Air Force Station. The weather forecast for liftoff is favorable, with only a slight concern for a chance of violating the cumulus cloud rules. Forecasters predict an 80-percent chance of good weather at the launch opportunity.

The mission was originally due to take place a day earlier, but United Launch Alliance delayed it for a day, with only a simple statement saying that it was moved “due to customer request.”

The Delta IV Heavy, which consists of three common booster cores, can lift nearly 29 tons to low-Earth orbit. It has flown 11 times since its mostly successful debut in December 2004. It is expensive, costing a few hundred million dollars per launch, but before the Falcon Heavy, it was the only rocket capable of delivering heavy payloads to the military’s most difficult orbits. In addition to its military manifest, the rocket has also launched two missions for NASA, a demonstration flight of the Orion space capsule in 2014 and the Parker Solar Probe in 2018.

After this launch, the rocket may take flight again as soon as October with another classified mission. Including Thursday morning’s launch attempt, there are just five missions remaining before the Delta IV Heavy rocket is retired. United Launch Alliance plans to replace it with the more cost-competitive Vulcan rocket, due to make its debut late in 2021 or early 2022.

The company’s webcast of the launch, embedded below, is scheduled to begin at 1:52am EDT (05:52 UTC) Thursday.