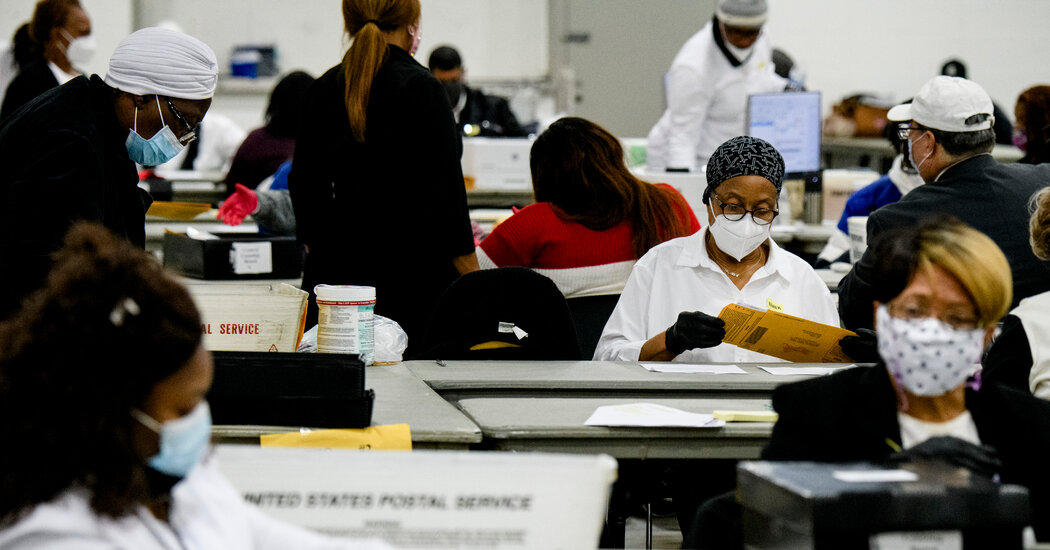 The night the nation has been waiting for — and in some quarters dreading — is finally here.

For four years, President Trump has run a permanent re-election campaign from the White House, hoping to recreate his 2016 victory, while Democrats have worked to ensure that a president who lost the popular vote by close to three million votes was limited to one term in office.

A pandemic changed both the stakes of the election and how the campaign season unfolded for both candidates. Former Vice President Joseph R. Biden Jr. leaned heavily on television advertising and limited his campaign appearances, while Mr. Trump tried to soldier on with outdoor rallies that often violated local health restrictions.

None of it made voters less motivated: Nearly 100 million people cast their ballots early, more than two-thirds of the total number of votes cast in the 2016 election.

Here’s what to watch for on Election Day.

Polls will begin closing at 6 p.m. Eastern in parts of Kentucky and Indiana, and the first results will begin rolling in soon after that. Both are securely in the Trump column.

After that, there are a few states that may determine early on whether this election might be resolved Tuesday night — or whether we are in for a long week or (yikes) month.

If Mr. Biden wins Georgia, Florida or North Carolina, Mr. Trump has an even slimmer path to victory.

Polls begin closing in Florida at 7 p.m. Eastern (polls in the Panhandle, which is on Central time, will close an hour later). Florida officials have already processed the state’s record-breaking early vote, which has been almost evenly divided between Republicans and Democrats. Watch for those to be announced shortly after 8 p.m.

Unless the margin is razor thin — it’s been known to happen in Florida — there is a good chance that the state will be called before bedtime on the East Coast.

Polls in Georgia also close at 7 p.m. Final results could be known within a few hours as well.

North Carolina’s polls close at 7:30 p.m. Most of the early vote there has already been counted, so this is another state that is likely to be called Tuesday, unless it is very close.

If Mr. Biden does not win any of those three states (or Texas, where most of the state polls close at 8 p.m.), that will ratchet up the importance of the so-called blue wall of Pennsylvania, Michigan and Wisconsin, which Mr. Trump flipped from Democrats in 2016 and where polls show Mr. Biden ahead. Mr. Trump needs to hold on to just one of them to win re-election, assuming he keeps the rest of his 2016 winning map. That’s a big assumption: He is defending a half-dozen states he won in 2016, and slightly trailing in some polls in Georgia and Arizona.

It all may come down to Pennsylvania. Polls there close at 8 p.m., but Pennsylvania won’t begin counting its early votes until Wednesday morning. The in-person voting is expected to be overwhelmingly Republican, so Mr. Trump may jump out to an early-night lead.

Don’t get misled; the early voting has been overwhelmingly Democratic. Polling shows Mr. Biden with a narrow lead in Pennsylvania, though Mr. Trump’s poll-defying victory there in 2016 — and the effort by his campaign this time to turn out first-time voters who Republicans say have been overlooked by pollsters — has made this state one of the big mysteries of the night. It could take days to finish counting Pennsylvania’s votes.

Polls in Wisconsin close at 9 p.m. Eastern, but the state’s municipal clerks won’t begin to count early votes until the polls open the morning of Election Day; a tight race might mean it will take a day or more before a winner is declared. In Milwaukee, the state’s largest city, officials said they would not release the results of any early voting until all ballots were counted — a process that isn’t likely to end until around 4 a.m. Wednesday.

The final poll closing in Michigan is 9 p.m. as well, though most of the state’s polls will be closed at 8 p.m. Early voting has been heavy here as well, and counting those votes didn’t begin until Monday. This is another one that could take awhile.

There will be a few later-night states out West that are worth keeping in mind: Nevada, which Mr. Trump has sought to pull back from the Democrats, and Arizona, which Mr. Biden has been trying to put into the Democratic column.

Trump will host an East Room gathering, but has no plans for a concession speech.

Four years ago, a superstitious Mr. Trump did not have a victory speech written before election night. Now, with the president expecting no definitive winner on Tuesday night, and his campaign lawyers trying to use state rules to stop the counting of mail-in votes after Election Day, he has no plans to deliver any sort of concession.

That’s a confident posture that will be tested if Mr. Trump loses Florida, which would all but close off his already narrow path to re-election. Aides said they expected him to declare victory if he won Florida, but it’s not clear what it would mean even if he did. A win in Florida would keep him in the race, but attention would then turn immediately to the Northern battlegrounds of Pennsylvania, Wisconsin and Michigan.

Like the election itself, Mr. Trump’s Tuesday night plans are still in flux. The White House has invited 400 people to the East Room and was planning for everyone attending to be tested for the coronavirus. There was no official invitation sent to many guests invited: The president’s secretary called them to extend the invitation personally. But officials said they expected a lot of attrition and were not certain how many people would show up.

Some of the president’s closest allies in the Senate, like Lindsey Graham of South Carolina and Mitch McConnell of Kentucky, the majority leader, will be back in their home states watching their own election results. Several Republican lawmakers on Capitol Hill have declined invitations to fly aboard Air Force One or visit the White House grounds since it became clear that the president and his staff were not adhering to the C.D.C.’s health guidelines.

And then there’s this: Many people in the president’s circle think he is likely to lose. A brief burst of optimism a few weeks ago has settled into concern about their own careers, post-Trump. Coupled with expectations of large protests around the White House, and the coronavirus, it was not seen by all invitees as the see-and-be-seen event of the year.

For Biden, it is a wait-and-see day.

Tuesday is the day Mr. Biden has been waiting for since he first began thinking about running for president in the early 1980s, and it will look nothing like he imagined. There will be no party, no raucous election night headquarters and no big speech to a room of cheering supporters, win or lose.

Mr. Biden never expected the capstone of his political career to fall during a pandemic — or against an opponent already making noise about declaring victory before all the votes are counted.

In one last push to win Pennsylvania, where early voting has lagged, the former vice president will make Election Day stops in Scranton, where he was born, and Philadelphia, where Black turnout four years ago was lower than forecast. Mr. Biden is expected to deliver remarks sometime late Tuesday night or Wednesday morning from Wilmington, Del., but if the result remains in flux he may wait.

It’s unclear what Mr. Biden would do if Mr. Trump declared himself the winner before there was clarity in enough states to accrue the necessary 270 electoral votes. Mr. Biden, after a campaign premised largely on the idea of returning to presidential norms, would be stepping far out of character if he too called himself the winner before results were known in enough states.

If he wins, Mr. Biden will be at a major inflection point for his party whenever he finally speaks before a national television audience. Having built a diverse coalition held together mainly by its antipathy toward Mr. Trump, Mr. Biden’s first moves as president-elect will provide distinct clues about what sort of presidency he hopes to lead — and how he may navigate what could be the most contentious presidential transition since 1876, when Rutherford B. Hayes and Samuel Tilden disputed the result of the election up until two days before the inauguration.

The fight for the Senate could be decided Tuesday.

Control of the Senate is also among the biggest issues being decided Tuesday, with the result going a long way toward determining the contours of the federal government for at least the next two years.

If Mr. Biden wins the presidency, Democrats need to flip a net of three Senate seats to take control of the chamber; if Mr. Trump is re-elected, they will need four.

The biggest prize is Georgia, where Senators David Perdue and Kelly Loeffler both face stern tests from the Democratic challengers Jon Ossoff and the Rev. Raphael Warnock (Ms. Loeffler also faces a challenge from the Republican Representative Doug Collins, in a special all-in primary). The state requires a winner to get at least 50 percent of the vote, or else either contest (or both) will be decided in a runoff in January.

Polling suggests Democrats are favored to pick up seats held by Senators Cory Gardner of Colorado and Martha McSally of Arizona, and lose the one held by Senator Doug Jones of Alabama.

The other big tossup contests are in Maine and North Carolina, where the Republican Senators Susan Collins and Thom Tillis face fierce challenges from the Democrats Sara Gideon and Cal Cunningham.

Democratic candidates in Kansas, Montana and South Carolina, where Mr. Biden has not competed, and Iowa, where Mr. Trump leads in the latest polling, have raised record-shattering amounts of money in hopes they can outperform the top of their ticket.

With control of the House unlikely to change, the ability of Democratic candidates for Senate in these states to outrun Mr. Biden may determine the shape of Congress next year.