The Galaxy That Grew Up Too Fast – The New York Times

In the early days of the Hubble Space Telescope, astronomers, eager to see how far out in space — and how far back in time — their new instrument could peer, pointed it at an empty tract of sky. What returned was an image of space littered with what the astronomer Alan Dressler of the Carnegie Observatories called “train wrecks”: irregular, fragmented clouds of stars known as protogalaxies, flecks of starlight scattered like orphan jigsaw puzzle pieces across the primordial heavens.

The scene fit nicely with the growing consensus of how the universe had evolved over cosmic time: Small bits of matter — gas, dust and starlight — slowly assembled themselves into ever larger structures, eventually resulting in majestic spiral galaxies, like our own Milky Way, 100,000 light-years across and home to hundreds of billions of stars.

But a new discovery suggests that this vision of cosmic growth may need revision. On Wednesday, radio astronomers using the mighty Altacama Large Millimeter Array, or ALMA, radio telescope in Chile announced that they had discovered a cloud of gas located on the distant shores of time. It appears to be an infant galaxy similar in size to its grown-up counterpart, our own Milky Way, and dates to a time when the universe was only 1.5 billion years old, one-tenth its current age.

The galaxy, known formally as ALMA J081740.86+135138.2, after its coordinates in the sky, is a giant, rotating wheel of gas, dust and faint starlight — a so-called disk galaxy — that extends 100,000 light-years across the primordial sky. It is at least as massive as 70 or 80 billion suns, in the same weight class as the Milky Way.

“To see it is a surprise,” said J. Xavier Prochaska of the University of California, Santa Cruz, one of the authors of a paper, published in Nature, describing the discovery.

Conventional lore held that such disk galaxies could not grow so big so early. “Most galaxies that we find early in the universe look like train wrecks because they underwent consistent and often violent merging,” Marcel Neeleman of the Max Planck Institute for Astronomy in Heidelberg, Germany, and lead author of the paper, said in a statement released by the institute. “These hot mergers make it difficult to form well-ordered, cold rotating disks like we observe in our present universe.”

In an interview, Dr. Prochaska said that train wrecks still make up 90 percent of the action in the very early universe. But the discovery of this galaxy suggests that large rotating disks were also part of the primordial mix, and that astronomers will most likely find more of them, he said. If that is the case, astronomers will need to modify some of their theories of how galaxies came to be.

Dr. Dressler, who called the new result “a nice piece of work,” said that computer models and simulations have never fully reproduced the details of galaxy and star formation without having to be constantly patched to fit new data. 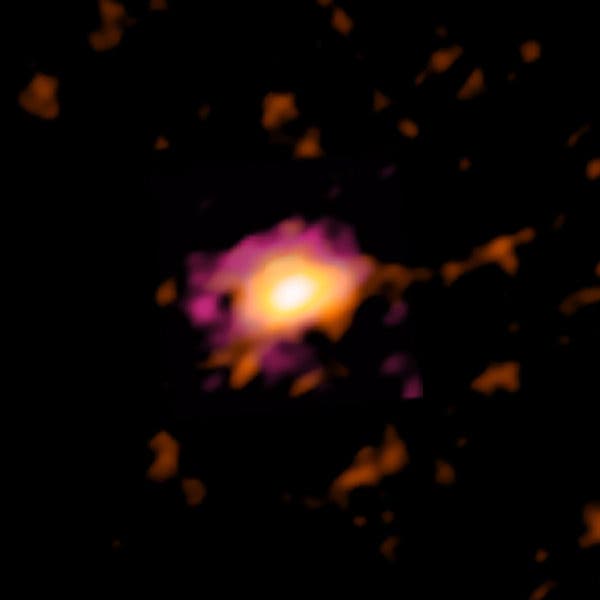 An ALMA radio image of the Wolfe Disk, seen when the universe was only one-tenth its current age.Credit…ALMA (ESO/NAOJ/NRAO), M. Neeleman; NRAO/AUI/NSF, S. Dagnello

To a cosmologist, galaxies are the true citizens of the cosmos. But where they come from and how they grow has always been fraught with controversy. And it is a story told mostly in the dark.

That story, researchers agree, began 13.8 billion years ago, when the universe emerged from the Big Bang as a fiery fizz of particles and energy. Sadly for astronomers, who like to see things, the atoms that comprise stars and ourselves are only a small minority constituent of what exists. This visible matter is vastly outweighed by mysterious dark matter, as yet unidentified, that seems to interact with us only through gravity.

In what has become the standard view of cosmology, dark matter provides the gravitational scaffolding for galaxies and other large structures. Small irregularities in the distribution of dark matter clump together into dense clouds connected by stringy filaments, according to computer simulations of the process. These spider-web shapes slowly draw ordinary atomic matter, which can eventually light up as stars, into their gravitational grip.

This is where things get messy. When gas falls into a galaxy, it heats up and becomes unruly — more so as it is banged around by other clouds of gas and dust — and causes train wrecks. Before the gas can grow dense enough to form stars, these wrecks must cool down again. The process can take a long, long time — billions of years — to settle down and form a stately disk as big as the Milky Way.

So the standard theory goes. But the history of the field is full of discrepant observations necessitating patching of the theory. There are hints, for example, of a phenomenon called downsizing, in which, as Dr. Dressler described it, the galaxies that grew earliest became the most massive ones visible today.

As a result, some astronomers have suspected that there might be another way for gas that was already cool to leak into the galaxy — perhaps, for instance, along the dark matter filaments that connected the big clumps of matter. Among those astronomers was Arthur Wolfe of the University of California, San Diego. He made it his mission to find galaxies or protogalaxies that could have formed when the universe was only 1 billion or so years old.

“We’re not saying that the cosmology is wrong,” Dr. Wolfe said in a statement from the university in 1997. “We’re saying the part of the standard lore concerning galaxy formation needs to be changed.”

Stars from objects so distant would be too hard to spot. Dr. Wolfe concentrated on detecting the gas in the protogalaxy disks by seeing how it affected the light from even more distant quasars.

“The quasars act like flashlights for us to observe the universe between us and the quasar,” Dr. Prochaska said. Gases like hydrogen would take a notch out of the spectrum of quasar light at certain characteristic wavelengths.

Using the Keck II telescope on Mauna Kea and a telescope of the Sloan Digital Sky Survey at Apache Point Observatory in New Mexico, Dr. Wolfe looked for quasars that showed the telltale absorption patterns indicating the possible existence of an intervening galaxy.

Dr. Wolfe died in 2014, but his students Dr. Prochaska and Dr. Neeleman have carried on. In 2018 they aimed the giant ALMA radio telescope in Chile at what they considered the best galaxy on a list of candidates Dr. Wolfe had assembled, an object known smartly as DLA0817g. In the course of an hour they recorded the unmistakable signature of a large, stable rotating disk of gas — a long sought galaxy.

They named it the Wolfe Disk, in honor of their mentor. It may be the first of many such galaxies to be found; the list of candidates now stands at 20, Dr. Prochaska said. Last year, the team reported another an observation in the primordial universe, of what appears to be a pair of merging galaxies. “The explanation that these disks are made by massive cold flows at very early times seems quite sensible,” Dr. Dressler said.

James Peebles, a Princeton physicist who last year won the Nobel Prize in Physics for inventing most of the techniques now used in cosmology, recalled that Dr. Wolfe’s ideas were controversial.

“Yes, I remember Art Wolfe’s discomfort with the treatment of his evidence for the presence of large disk galaxies at high redshift,” he said in an email; redshift is what cosmologists use to measure distance and time in the universe. “The Young Turks declared Art’s evidence to be theoretically excluded.”

He added: “And since Prochaska was Art’s student, and close to Art, their naming this large spiral a Wolfe Disk is a nice touch.”