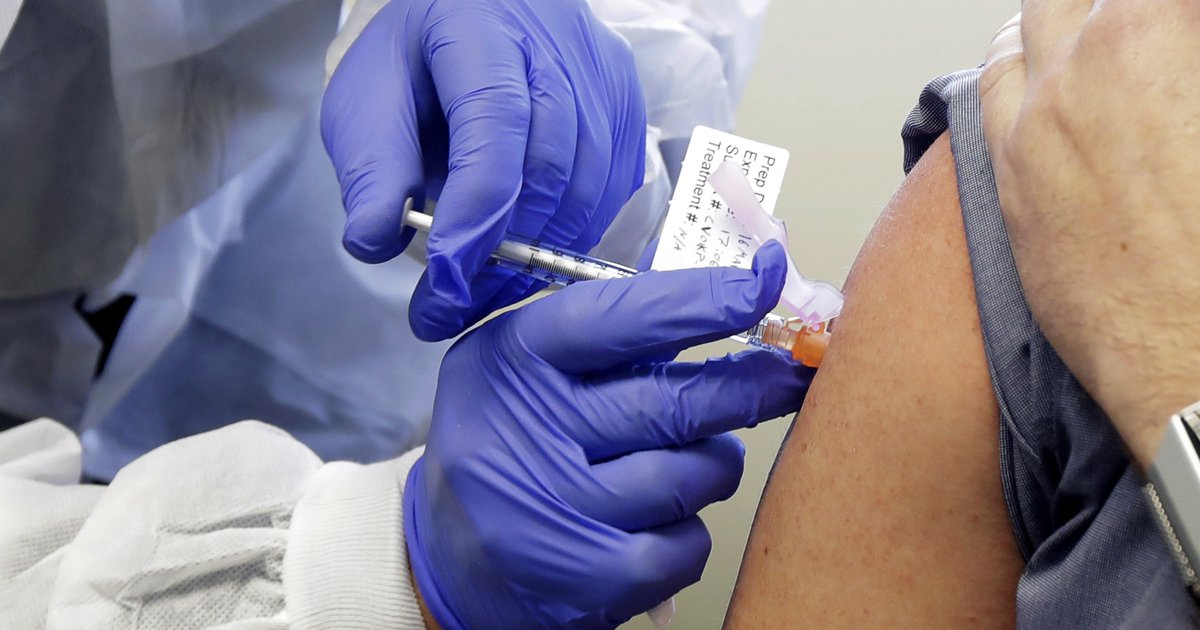 Editor’s note: The Salt Lake Tribune is providing free access to critical stories about the coronavirus. Sign up for our Top Stories newsletter, sent to your inbox every weekday morning. To support journalism like this, please donate or become a subscriber.

There’s a good case that the topic I’m writing about today is, without hyperbole, The Most Important Topic In The World.

With thousands of people dying each day, economies stuck in limbo, and political futures defined by the coronavirus, billions of people are looking toward the possibility of a vaccine to save the world.

So whenever big news comes out about vaccines, I’m going to let you know about it. And recently, there’s been a lot of that big news — some of it great, some of it OK, and some of it intriguing.

For those who haven’t had the chance, I’d recommend reading my vaccine Q&A from the end of April on how vaccines work and how they’re tested. For the scientists out there, I’d also recommend checking out Derek Lowe’s In The Pipeline series for more detail.

Moderna’s “mRNA-1273” vaccine was one of the leaders in the vaccine race when I first looked at the topic nearly a month ago, thanks to already being in Phase I human trials. On Monday, we got positive news about how those trials were going.

In the Phase I experiments, Moderna created three groups of 10 to 15 people each. One group received 25 micrograms of the vaccine, one group got 100 micrograms, and another received 250 micrograms. Researchers found that every participant in every group started creating antibodies to COVID-19 after 15 days, just as someone actually infected with the disease would.

Now, the researchers found out that there were some side effects when they gave people the big 250 microgram dose. Three people had “grade 3 systemic symptoms,” which means fever or flu-like symptoms, something like that. All three recovered. One person who got the 100 micrograms had redness in the arm near the shot injection site, but that’s generally not something to worry about. Initial indications are that the vaccine is safe.

So as the Moderna team plans Phase II trials, they’re going to cut out the 250 microgram dose because the smaller doses seem to work well enough. They’re also going to get a larger sample of participants to study safety and effectiveness. That’ll start that right away, with the goal of starting the even bigger Phase III trials in July. There’s still a lot to study in those trials, including how the vaccine affects children, the elderly, and other immunocompromised people.

What would that mean for Moderna’s timeline? Well, it still depends on the steps ahead: Phase III trials and manufacturing.

Interestingly, something Moderna hasn’t commented on at all is using “challenge trials” for the all-important Phase III — where you’d intentionally infect someone with the virus to see if the vaccine works, rather than just letting people go out and live their lives to see if they get it naturally. While that’s something thousands of volunteers have been willing to do, many still find the notion ethically queasy. If Moderna doesn’t want to use challenge trials for Phase III, it will take longer.

The other thing is that this vaccine is a RNA vaccine, and the FDA has never approved one of those for human use before. Theoretically, RNA vaccines should be easier and safer to manufacture than other vaccines, but given that no one has done it, unexpected roadblocks are still possible.

There are real hurdles here, and given the history of vaccine development, Moderna’s “mRNA-1273” still may not be better than a 50/50 proposition. But if we get lucky and the testing and manufacturing go well, the vaccine could be in the hands of high-risk groups by the last months of 2020.

The vaccine at the top of my April review was Oxford University’s “ChAdOx1-nCov19,” thanks to announced positive results in monkeys and the fact that researchers said that they could have a few million doses ready by September if trials go well.

But this is one example where a positive news release can hide some irksome realities — something to be aware of before we get the actual data from the Moderna research above.

On May 13, the Oxford team released the actual monkey study. Three were injected with the vaccine, three weren’t, and then all of them were presented with the virus.

So one reasonable hypothesis is that, as it stands, the Oxford vaccine gives monkeys enough antibodies that their infections don’t become deadly, but not enough antibodies to prevent them from being infected. And given that COVID-19 seems to spread asymptomatically sometimes, this vaccine may not be useful for creating herd immunity in the population.

Now, there are caveats to the bad news. The Oxford team really worked hard to infect these monkeys. They gave them a huge dose of the virus, and stuck it in both their upper and lower respiratory tract. That’s not how people get it in the real world. There’s still experimenting to be done with vaccine doses: maybe a larger dose, or a second one, would give people more antibodies.

Giving people enough antibodies that their infections don’t become deadly is obviously an important goal, and development of this vaccine should continue. If we really can get a few million doses of the vaccine by September, it’s easy to find high-risk people to give it to, which might save thousands of lives.

The Oxford vaccine isn’t perfect right now, and it’s important to know that. We should still root for them to fix these problems, though, because it probably has the quickest timeline of any vaccine candidate.

The BCG vaccine, first made in 1921, is effective in fighting the spread of tuberculosis. It’s generally given at birth in countries where TB is a problem; the U.S. is not one of those, but worldwide in 2004, 100 million children got the vaccine. It’s not perfect, but it seems to reduce TB cases by 60% to 80%.

Interestingly, the BCG vaccine also has verified results on respiratory infections. In South Africa, for example, the vaccine led to reduced respiratory tract infections in children by 73%. Desperate for a COVID-19 vaccine, some have essentially said “hey, let’s try this vaccine we already know about that seems to do something useful against some vaguely similar stuff.”

So in Australia and the Netherlands, scientists are doing BCG trials on big numbers of healthcare workers. Because we already know BCG is safe, we can skip ahead to Phase III trials to see if it works in thousands of people at a time. If that works, we could start using the BCG vaccine to help right away after we manufacture enough.

There have been some retrospective studies with mixed results. One just looked at countries that generally do BCG vaccination and those that don’t, and found that the ones that were vaccinated tended to have fewer deaths. One study in Israel found hundreds of people who did get the BCG vaccine as kids and hundreds who didn’t, and found no difference in cases between the two — but the groups weren’t big enough to study whether BCG made an impact on deaths.

In general, there’s skepticism that the BCG vaccine can prevent coronavirus infections in adults decades after they got the shot. But there’s some sliver of hope that it might help prevent some number of the worst cases, and no one really knows what will happen when we give it to adults now.

As readers know, I don’t like venturing into politics. But there have been political decisions made that will impact the distribution of the vaccine.

The biggest is Operation Warp Speed — as Science magazine called it, “the White House’s America-first push for a coronavirus vaccine.” Essentially, the administration has created a group focused on pushing “limitless resources” into the study and manufacture of a coronavirus vaccine. This is a good idea!

Apparently, the goal is to have 300 million doses ready for Americans by 2021. That seems wildly optimistic, but it’s right on the edge of what’s possible if everything goes exactly right.

There are worries about how the program will turn out. One worry is about international cooperation, because the U.S. hasn’t committed to notable initiatives to promote global vaccine distribution. Warp Speed’s goal is to protect Americans — as the official who spoke to Science magazine said, “We want to get our oxygen mask on first and then we’re going to help the people around us.”

In particular, the official noted that “We can’t partner with Chinese companies… that’s just not going to happen.” But Chinese companies do have at least five of the most promising vaccine candidates in human trials right now, and so if one of those vaccines were to win the race, the U.S. might be at a disadvantage. Even if the company that develops the first vaccine isn’t from China, but from the U.K., Germany, or Australia, the U.S. government’s reluctance to support global efforts may mean that America’s wellbeing wouldn’t be a priority.

The good news is that President Donald Trump since then has said his administration would work with international partners. “Whoever gets it, we think it’s great and we’re going to work with them and they are going to work with us.” That ethos of cooperation may trickle down to the program after all, but we’ll see.

Operation Warp Speed’s success will depend on its ability to pour resources — including the military’s distribution expertise — into vaccine production in a helpful way without interfering with the scientific community’s ongoing positive efforts. It will be important for elected officials to keep an eye on what’s happening here: it’s easy to imagine Warp Speed being effective, but just as easy to imagine it being a disaster. In that latter case, Congress should step in.

Andy Larsen is a Tribune sports reporter who covers the Utah Jazz. During this crisis, he has been assigned to dig into the numbers surrounding the coronavirus. You can reach Andy at alarsen@sltrib.com or on Twitter at @andyblarsen.