Glendale, Arizona — Three people were wounded, one critically, in a shooting Wednesday near a popular shopping and entertainment district in this suburb west of Phoenix, police said.

The suspect was taken into custody safely, Glendale Officer Tiffany Ngalula said in a televised briefing. The most seriously wounded victim was taken to a hospital, and the other two were expected to survive, she said.

The Westgate Entertainment District, part of a complex that includes arenas for Cardinals football and Coyotes hockey, was humming with activity after many of its stores and restaurants reopened after being closed for more than a month due to the coronavirus outbreak.

The shooting was over by the time officers arrived, Ngalula said. 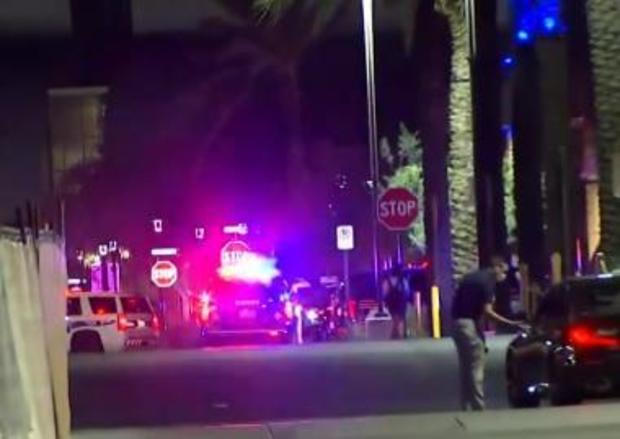 Scene at Westgate Entertainment District after three people were shot on night of May 20, 2020. CBS affiliate KPHO-TV

Police locked down the area and were methodically going through businesses to search for any additional victims or suspects, the Ngalula said.

CBS Phoenix affiliate KPHO-TV reported that police initiated reverse 911 calls to homes in the surrounding area to tell residents about the situation.

Governor Doug Ducey said he’s monitoring the situation and “the state is here to continue to offer its full support to the victims and to the community.”

There is no more terrifying time than right now for everyone who is wondering if their loved ones who were at Westgate are safe, or if they are among those who were hurt. @GabbyGiffords and I have been through this, and so have far too many other Americans. We’re with you.

Giffords, Kelly’s wife, is the former congresswoman who was among 19 people shot during a constituent meeting in a supermarket parking lot just outside Phoenix in January 2011. Six died and Giffords suffered severe brain injuries from which she’s still recovering. Kelly and Giffords have become leading gun control advocates.

State Senator Martin Quezada, a Democrat, wrote on Twitter that he saw a person “with an AR-15 shoot up Westgate.”

“I saw 2 victims with my own eyes. Not sure how many others,” he wrote on Twitter. “I saw the shooter. Being told not to say anything else about details ’til I speak to police. I’m ok. Lots of shaken up people.”

Ngalula said she couldn’t confirm that the gunman used an AR-15.

A woman who didn’t want to be identified told KPHO her daughter was hiding at the Yard House restaurant. She was been able to call and text her daughter, who talked to her father, who lives in Hawaii.

The mother said her daughter had been under a table but was sitting at a booth as SWAT team members were going around and clearing all the buildings.

“It’s painstaking, to think your child is in there and you’re just waiting,” the mother said. “There’s nothing else you can do. I just want to hold her.”