Tired of self-isolating at home? NASA wants you to isolate in Russia for 8 months instead – Inverse

By now, most of us are experiencing quarantine fatigue. And perhaps a little change in ‘isolation scenery’ is required for some.

For those who truly need to gey away, NASA is recruiting participants for its next spaceflight simulation study, inviting a small group of people to live together in isolation for a period of eight months in Moscow, Russia.

The purpose of the study is to help NASA get a better understanding of the psychological and physiological effects of isolation and confinement on humans.

As NASA prepares for longer duration missions to the Moon, and future missions to Mars, it also needs to prepare its future astronauts for long periods of isolation while journeying through outer space.

Participants in the study will live in an environment similar to that of a spacecraft, and will be required to complete simulated space missions during their time at the facility. Just as astronauts onboard the International Space Station take part in scientific experiments onboard while flying 254 miles above Earth, participants of the study will also be conducting scientific research using virtual reality and perform different robotic operations. 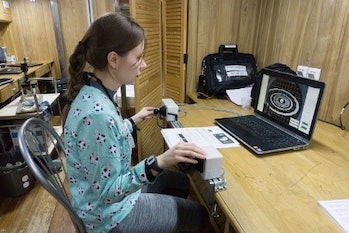 A crew member conducting robotic operations while in isolation.NASA and the Institute for Biomedical Problems

In order to take part in the study, participants must be United States citizens between the ages of 30 to 55 years old, and must be proficient in both English and Russian. They also must have a master’s degree in the field of science, a PhD, or a medical degree, or have completed a military officer training. Candidates with a bachelor’s degree may also be considered if they have relevant military or professional experience, or additional education.

As a health precaution considering the ongoing spread of the novel coronavirus, participants will also be placed in a two-week quarantine before going into the facility where the study will take place.

The participants will be compensated for taking part in the study.

This is a follow-up to another study that took place in 2019 where six people, two Americans and four Russians, spent four months in a metal habitat that acted as a spacecraft. The crew simulated mission operations tasks, from docking to a space station orbiting the Moon, to selecting lunar landing locations and conducting moonwalks on the lunar surface. 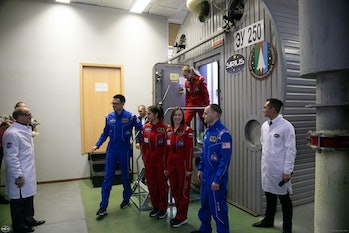 Members of the crew from the 2019 study emerging from their isolation pod.IBMP

Members of the crew also underwent different experiments to test the toll of isolation on their mind body through self-tests, questionnaires, specimen collection and journaling.

“Social isolation is a very important area for us to research. It is associated with higher levels of stress and affects physiological and psychological well-being,” Thomas Williams, Ph.D., scientist for the Human Factors and Behavioral Performance Element, said in a statement.

Since people around the world have been forced to stay home to help stop the spread of the coronavirus, NASA astronauts have been weighing in with tips on how to combat the psychological toll self-isolation can take and deal with feelings of loneliness. Astronauts can spend up to months on end in isolation onboard spacecraft, and longer duration missions are planned for the future of space travel as agencies aim for faraway planets like Mars.

As a result, studies like this one are crucial to helping NASA better understand the effects of isolation, and ways to mitigate it during spaceflight.

If you think you’re up for the challenge, you can apply to take part in the upcoming study here.