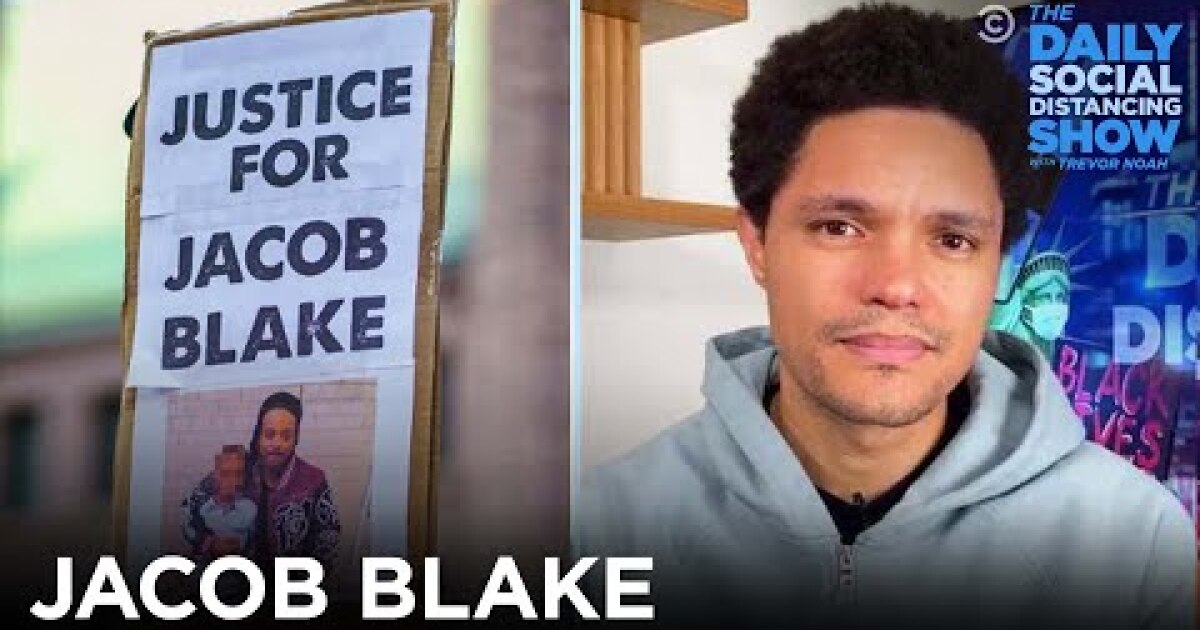 Trevor Noah has some questions — and answers —about the situation unfolding in Kenosha, Wis., after the police shooting of Jacob Blake.

On Wednesday’s episode of “The Daily Show,” Noah shared his thoughts on the protests that erupted after Blake, an unarmed Black man, was shot multiple times by police in front of his young children.

Shortly before “The Daily Show” aired, Kyle Rittenhouse, a white teenager armed with a semiautomatic rifle, was charged with killing two protesters the night before.

“How come Jacob Blake was seen as a deadly threat for a theoretical gun — that he might have and might try to commit a crime with — but this gunman, who was armed and had already shot people, who had shown that he is a threat, was arrested the next day, given full due process of the law and generally treated like a human being whose life matters?” Noah said.

“I’m asking these as questions, but I feel like we know the answer. The answer is that the gun doesn’t matter as much as who’s holding the gun. Because to some people, black skin is the most threatening weapon of all.”

The night before Rittenhouse’s arrest, onlookers alerted police that the 17-year-old — who, as a minor, was not legally allowed to openly carry a weapon — was walking the streets with the rifle slung around his neck. The teen, who attended a Trump rally this year and has shown social media support for the pro-police Blue Lives Matter movement, told reporters at the scene that he traveled to Kenosha to protect businesses from vandalism.

“Some guy decided to drive to Kenosha with his ‘militia’ buddies to protect a business and apparently ended up shooting three people and killing two,” Noah said. “But don’t worry — the business is OK. And let me tell you something: No one drives into a city with guns because they love someone else’s business that much.

“No one has ever thought, ‘Oh, it’s my solemn duty to pick up a rifle and protect that TJ Maxx.’ They do it because they’re hoping to shoot someone. That’s the only reason people like him join these gangs in the first place. And yes, I said it: a gang. Enough with this ‘militia’ b—. This isn’t the Battle of Yorktown. It’s a bunch of dudes threatening people with guns.”

Noah also sounded off on police brutality and the lack of “any police accountability” as “these incidents remain an open wound, and the pain and the anger just builds and builds with no closure or relief.” No officers have been charged in the shooting of Blake.

“I’ll never get used to how quickly police go from issuing commands to using deadly force,” Noah said. “Whatever happened to warning shots or tackling a suspect? Are we really meant to believe that the only two options a cop has is, do nothing or shoot somebody in the back seven times?

“That’s all we have? I mean think about it: Even when wild animals unleash on the streets, they don’t always shoot to kill. They have tranquilizers. They have nets. I never thought I would wish for Black people to be treated at least like a wild bear, but here we are.”

In addition to his powerful remarks on Kenosha, Noah also made headlines on Thursday for trolling President Trump with full-page legal ads in the New York Times, the Washington Post and the Los Angeles Times for “Trevor Noah & Associates & Sons Presidential Attorneys.”

“ARE YOU A SOON-TO-BE EX-PRESIDENT? ABOUT TO LOSE LEGAL IMMUNITY?” the faux ad reads. “HAS YOUR LAWYER GONE TO JAIL? Call the very fine people on YOUR side.”

“ARE YOU A SOON-TO-BE EX-PRESIDENT? ABOUT TO LOSE LEGAL IMMUNITY? HAS YOUR LAWYER GONE TO JAIL? Call the very fine people on YOUR side.” pic.twitter.com/0GOmnm6vW1

According to Mashable, the phone number included in the ads (1-210-WH-CRIME) is real, and callers are presented with two options when dialing it. Those who press 1, confirming that they are the president, receive the following snarky message:

“Hello, Mr. President. I’m Trevor Noah, managing partner of Trevor Noah and Associates and Sons. Have you ever been to Uganda, sir? It’s a beautiful country with a strong goat-based economy. And most important, it does not extradite to the United States.

“At any time on or before Jan. 20, 2021, I can transport you and any members of your family you actually like to Uganda. I can provide the service for, I don’t know, $10 million. Let me know. Oh, and if you made a mistake, and you’re not actually the president, press or say 2 now. Otherwise, goodbye, Mr. President.”

Callers who press 2, indicating that they are not the president, will hear this:

“Congratulations on not being the president! Since you do not need a lawyer specializing in president crime, why not visit votevotevote.com to make sure that you’ve registered to vote in the election? That’s right. This is a public service announcement. Gotcha! Anyway, please check your voter registration and make a plan to vote. Goodbye.”