Tropical Depression 13 is moving toward South Florida, according to the National Weather Service.

“South Florida is still in the forecast cone of Depression 13, but there is still high uncertainty to determine what, if any, impacts this system may have on South Florida at this time,” NWS Miami tweeted early Thursday.

The NWS’ forecast model shows the depression near Puerto Rico on Saturday morning and reaching South Florida early next week. The National Hurricane Center said there is a risk of tropical storm conditions in the Virgin Islands and Puerto Rico Friday night and Saturday. 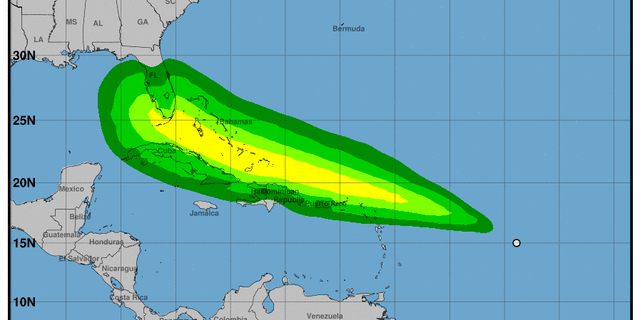 The depression formed in the tropical central Atlantic late Wednesday. On Thursday morning, it was 2,092 miles from Miami, moving west-northwest at 21 mph.

Early Thursday, the National Hurricane Center tweeted that the depression was moving with little change in strength.

“Tropical storm conditions are possible across portions of the northern Leeward Islands by Friday night, and Tropical Storm watches have been issued for some of these islands,” the National Hurricane Center said in a statement. “Heavy rainfall is likely across this area beginning late Friday.”

A tropical depression is a tropical cyclone with “maximum sustained surface winds (one-minute average) of 38 mph (33 knots) or less,” according to the National Weather Service.