President Donald Trump has previously made several promises that the country would have a COVID-19 vaccine ready “very soon,” including by election day.

But as of November 3, all vaccine candidates across the globe are still at their pre-clinical and clinical evaluation stages, according to the latest report Tuesday by the World Health Organization (WHO). These include several being developed by companies in the U.S., none of which have applied for approval of their vaccine candidates.

In September, Trump said: “So we’re going to have a vaccine very soon, maybe even before a very special date. You know what date I’m talking about,” accusing the Food and Drug Administration (FDA) and health experts from the U.S. Center for Disease Control and Prevention (CDC) of playing politics with the election day goal.

Back in August during an interview on Geraldo Rivera’s Roadwill with Geraldo podcast, the president said “in some cases,” a vaccine could be ready before the election.

“I think in some cases, yeah, it’s possible before [the election]. But right around that time,” Trump told Rivera. “We have great companies. Great. These are the greatest companies in the world. And the rest of the world is also doing vaccines. So let’s see how they do.”

On Friday, the White House director of strategic communications, Alyssa Farah, noted the president’s promise to deliver a vaccine by November 3 was “kind of an arbitrary deadline.”

Farah told reporters: “We’ve got nearly half a dozen vaccines that are in Phase Three clinical trials, which is record time to get it there for a novel virus like we’re dealing with.

“We’re still highly confident we’ll have one by the end of the year and be prepared to deploy it to a hundred million Americans.”

“His [Trump] goal has never — election day is kind of an arbitrary deadline,” she said.

Among the potential vaccines in their third phase trials is one being developed by Pfizer, the major pharmaceutical company based in New York City, in collaboration with BioNTech, a biotechnology firm in Germany.

Last month, Pfizer revealed it could seek safety approval from the FDA as early as the third week of November, “assuming positive data” is seen from the latest trials, according to an open letter from Pfizer chairman and chief executive officer (CEO), Albert Bourla.

“In the instance of Emergency Use Authorization in the U.S. for a potential COVID-19 vaccine, FDA is requiring that companies provide two months of safety data on half of the trial participants following the final dose of the vaccine.

“Based on our current trial enrollment and dosing pace, we estimate we will reach this milestone in the third week of November. Safety is, and will remain, our number one priority, and we will continue monitoring and reporting safety data for all trial participants for two years.

“So let me be clear, assuming positive data, Pfizer will apply for Emergency Authorization Use in the U.S. soon after the safety milestone is achieved in the third week of November,” Bourla noted.

In September, the company announced it would be applying for an expansion of its phase three trial to “approximately 44,000 participants which also allows for the enrollment of new populations,” the company said in a statement at the time.

On October 22, Massachusetts-based biotechnology firm Moderna completed its enrollment of 30,000 participants for the phase three trial of mRNA-1273, the COVID-19 vaccine candidate being co-developed with the National Institute of Allergy and Infectious Diseases (NIAID).

“Moderna will determine whether to submit a dossier to FDA requesting Emergency Use Authorization based on an assessment of whether the potential benefit of the vaccine outweighs the potential risks once the two months of median safety follow-up have accrued,” Moderna noted in a statement last month.

Last week, Moderna confirmed it was on track to reveal interim data this month from its latest trial, Reuters reported.

U.S.-based Johnson & Johnson, which last month paused its COVID-19 vaccine candidate clinical trials due to an “unexplained illness” in one of its participants, recently announced it is preparing to resume enrollment for its phase three trial.

“After a thorough evaluation of a serious medical event experienced by one study participant, no clear cause has been identified. There are many possible factors that could have caused the event.

“Based on the information gathered to date and the input of independent experts, the company has found no evidence that the vaccine candidate caused the event,” the company said in a statement on October 23.

Back in late September, Maryland-based biotechnology firm Novavax began phase three of its NVX-CoV2373 vaccine trial, which is being conducted in the U.K., in partnership with the British government’s Vaccines Taskforce, the company confirmed in a statement.

Last Thursday, Dr. Anthony Fauci, the director of NIAID, noted Americans will likely know “sometime in December whether or not we have a safe and effective vaccine,” during a live chat on Twitter and Facebook.

“The first interim look [at trial results] should be, we hope, within the next few weeks,” Fauci noted.

Last month, U.S. Secretary of Health and Human Services Alex Azar said: “Pending FDA authorizations, we believe we may have up to 100 million doses by the end of the year—enough to cover especially vulnerable populations—and we project having enough for every American who wants a vaccine by March to April 2021.” 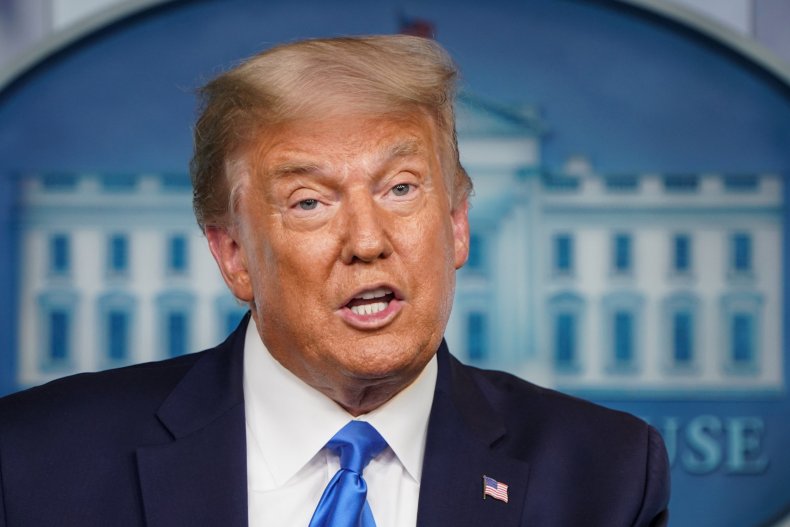 President Donald Trump addressing questions about a COVID-19 vaccine and other topics at a news conference at the White House on September 23 in Washington, D.C. Trump has previously claimed a vaccine could be available by election day. Joshua Roberts/Getty Images
Share this...