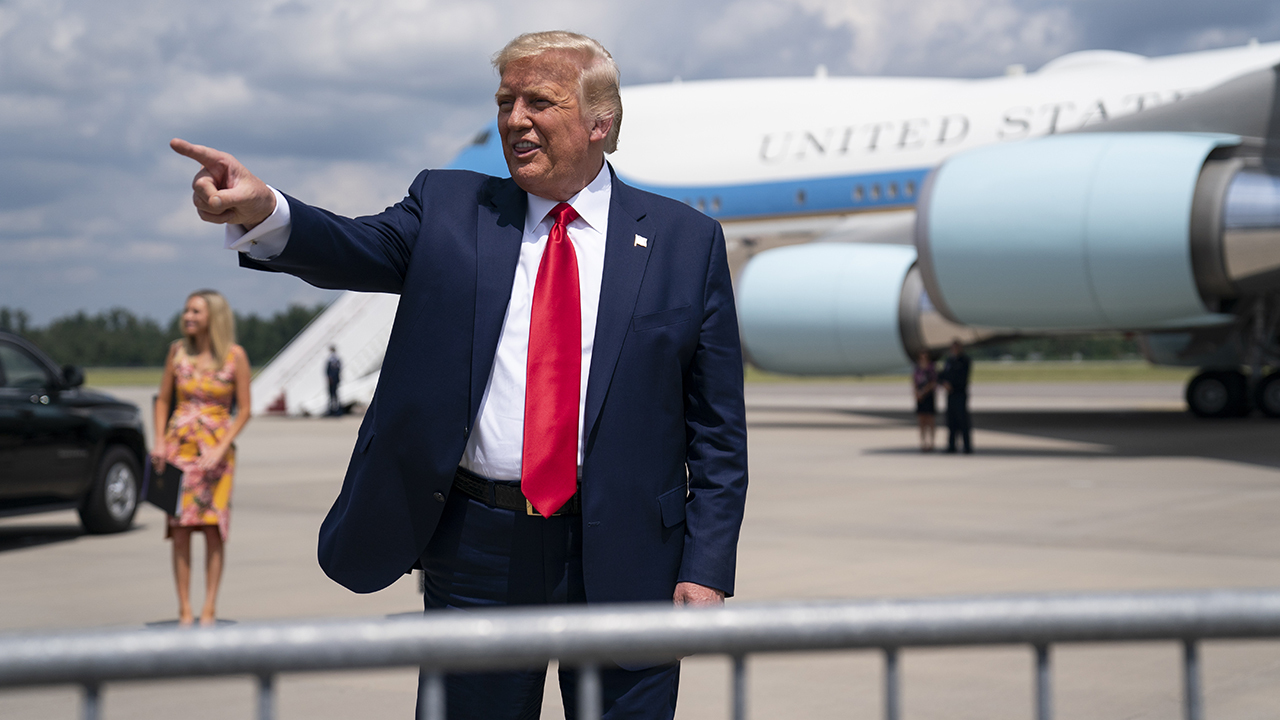 President Trump encouraged voters to make sure “your precious vote has been counted,” a day after he was accused of urging his supporters in North Carolina to commit election fraud by trying to vote twice — once by mail and then again in-person at the polls on Election Day just in case.

He clarified on Twitter that he wanted voters to double-check that their mail-in votes were counted.

“Based on the massive number of Unsolicited & Solicited Ballots that will be sent to potential Voters for the upcoming 2020 Election, & in order for you to MAKE SURE YOUR VOTE COUNTS & IS COUNTED, SIGN & MAIL IN your Ballot as EARLY as possible,” Trump tweeted Thursday morning.

“On Election Day, or Early Voting, go to your Polling Place to see whether or not your Mail In Vote has been Tabulated (Counted),” the president continued. “If it has you will not be able to Vote & the Mail In System worked properly. If it has not been Counted, VOTE (which is a citizen’s right to do).”

TRUMP DESIGNATES WILMINGTON A ‘WORLD WAR II HERITAGE CITY,’ DECLARES ‘WE WON’T TEAR DOWN THE PAST

Trump concluded: “If your Mail In Ballot arrives after you Vote, which it should not, that Ballot will not be used or counted in that your vote has already been cast & tabulated. YOU ARE NOW ASSURED THAT YOUR PRECIOUS VOTE HAS BEEN COUNTED, it hasn’t been “lost, thrown out, or in any way destroyed”. GOD BLESS AMERICA!!!”

The tweets came after Trump on Wednesday spoked in an on-camera interview about his concerns over potential election fraud amid an increase in mail-in voting sparked by the coronavirus pandemic. Critics accused the president of telling Americans to vote twice ‒ once by mail, and a second time by casting their votes at the polls ‒ in order to test the veracity of the system.

“Let them send it in and let them go vote,” Trump said in an interview with WECT-TV in Wilmington, N.C., when asked about the security of mail-in votes. “And if their system is as good as they say it is, then obviously they won’t be able to vote. If it isn’t tabulated they’ll be able to vote. So that’s the way it is, and that’s what they should do.”

“I don’t like the idea of these unsolicited votes. I never did. It leads to a lot of problems. They’ve got 11 problems already on very small contests. I’m not happy about it. At the same time, we’re in court with a lot of it. We’re going to see if it can be stopped,” the president told WECT’s Jon Evans standing in front of Air Force One shortly after arriving at Wilmington International Airport.

“But send your ballots, send them in strong, whether it’s solicited or unsolicited. The absentees are fine. But go to vote and if they haven’t counted it, you can vote. That’s the way I view it.”

Voting twice in the same election is against the law.

“You can’t let them take your vote away. These people are playing dirty politics. So if you have an absentee ballot, or as I call it, a solicited ballot, you send it in. But I would check it in any event. Go and follow it and go vote,” Trump later told a crowd of reporters.

“Today, President Trump outrageously encouraged NCians to break the law in order to help him sow chaos in our election,” North Carolina Attorney General Josh Stein tweeted Wednesday. “Make sure you vote, but do NOT vote twice! I will do everything in my power to make sure the will of the people is upheld in November.”

“Casting two ballots is illegal,” the ACLU tweeted. “Don’t listen to the President.”

“He’s trying to make the point that the ability to monitor the system is not good. And, if it was so good, if you tried to vote a second time, you would be caught,” Barr said, referencing the president. When CNN’s Wolf Blitzer asked whether it was illegal to vote twice in an election, Barr responded: “I don’t know what the law in that particular state says.”

Tim Murtaugh, Trump 2020 communications director, said the president was drawing attention to “the reckless election law tampering Democrats are doing in states across the country, creating the very real opportunity for people to vote twice.”

“President Trump encourages supporters to vote absentee-by-mail early, and then show up in person at the polls or the local registrar to verify that their vote has already been counted. It’s amazing that the media can go from insisting that voter fraud doesn’t exist to screaming about it when President Trump points out the giant holes in the Democrats’ voting schemes,” Murtaugh added.

Reyna Walters-Morgan, Democratic National Committee director of voter protection and civic engagement, maintained that Trump “encouraged his supporters to commit voter fraud, which in North Carolina is also a Class I felony. It’s that simple.”

“Let’s be clear: Voting by mail is a safe and secure way for Americans to participate in our democracy—and Trump should be working to make it easier to vote, not harder,” she said. “We know Trump will attempt to spread misinformation with the goal of weakening trust in our democracy because what he fears most in November are millions of Americans at the ballot box holding him accountable.”

Karen Brinson Bell, executive director of the North Carolina State Board of Elections, said in a statement Thursday that “It is illegal to vote twice in an election. N.C.G.S. § 163-275(7) makes it a Class I felony for a voter, ‘with intent to commit a fraud to register or vote at more than one precinct or more than one time…in the same primary or election.’ Attempting to vote twice in an election or soliciting someone to do so also is a violation of North Carolina law.”

“The State Board office strongly discourages people from showing up at the polls on Election Day to check whether their absentee ballot was counted. That is not necessary, and it would lead to longer lines and the possibility of spreading COVID-19,” Bell added.

Meanwhile, former Vice President Joe Biden’s campaign is spotlighting sound from an interview Trump held with Fox Business in May. In part, the president said, “The level of dishonesty with Democrat voting is unbelievable. If you told a Republican to vote twice, you’d get sick at even the thought of it. And you have people who vote numerous times. What’s happening is crazy. So now they want to send out vote by mail. Who’s knows who’s signing this stuff.”