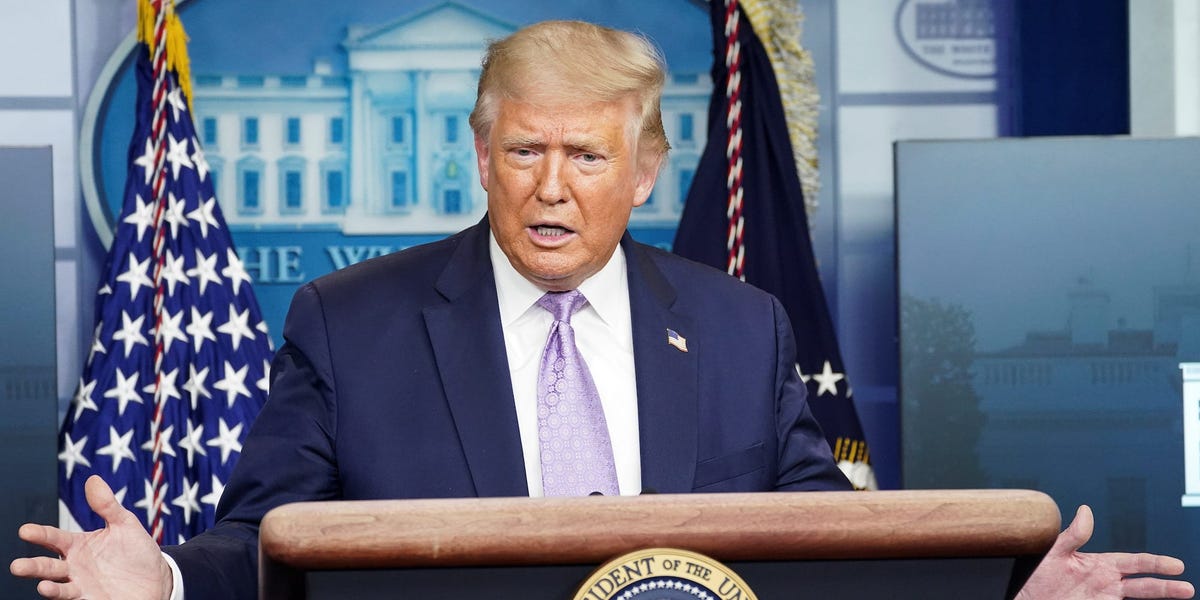 President Donald Trump threw the prospect of another round of stimulus checks back into play earlier this week, calling for Republicans to get behind another big aid package.

But the Senate GOP hasn’t been swayed so far — and they’re doubling down on their reluctance to approve more federal spending after Democrats blocked a slimmed-down $300 billion package last week.

On Wednesday, Trump tweeted that Republicans should “go for the much higher numbers” on coronavirus aid. He later praised a $1.5 trillion relief plan that a bipartisan group of 50 House lawmakers put forward.

“Some of the Republicans disagree, but I think I can convince them to go along with that because I like the larger number,” Trump said at a press conference. “I want to see people get money.”

“This used to be the White House versus Pelosi up until about now — now the president’s coming in and saying we can maybe go to $1.5 trillion,” Senate Finance Chairman Chuck Grassley told Bloomberg on Thursday. “He better be careful of that because I don’t think that will get through the United States Senate.”

It indicates Trump may have limited influence prodding Republicans to support additional stimulus spending. Before negotiations collapsed last month, Trump largely sat them out, leaving it up to Treasury Secretary Steven Mnuchin and White House chief of staff Mark Meadows — two of his top lieutenants — to engage with Democrats.

Read more: Morgan Stanley says the stock market’s future is ‘unusually dependent’ on another stimulus package — and recommends 5 portfolio moves to make if Congress passes another round

Democrats led by Senate Minority Leader Chuck Schumer and House Speaker Nancy Pelosi are insisting on at least $2.2 trillion in federal spending. They lowered their demand from $3.4 trillion, the size of an aid package House Democrats passed in May. It included provisions for additional stimulus checks, $600 unemployment benefits, and state aid.

There are still areas of fierce disagreement between Republicans and Democrats. Talks fell through in early August after both sides failed to bridge divisions on federal unemployment aid and state aid, prompting Trump to implement several executive actions.

“Are we trying to get the economy back up and running or should we keep it shut down?”

Oren Cass, executive director of American Compass and a conservative economist in contact with several congressional GOP offices, says the standoff between both parties stems from conflicting views of what a package should achieve.

“The core disagreement: Are we trying to get the economy back up and running or should we keep it shut down?” Cass told Business Insider.

Complicating matters is that Republicans never coalesced around an aid package. They unveiled a $1 trillion plan in late July, but Senate Republicans never brought it to a vote since scores of lawmakers within their party opposed the price tag.

Cass favors another stimulus package to prop up the economy, saying its recovery can be accelerated by helping people return to work. He adds additional relief legislation would likely benefit the GOP politically ahead of November.

“It seems odd for the controlling party in power in both the Senate and White House with an incredibly important, close and contentious election a few months away to be rejecting the idea of an economic policy that’s much needed and very popular,” Cass said.

Many economists are urging lawmakers to approve more spending to address the economic fallout from the pandemic, which threatens to deepen the pain for nearly 29 million Americans still receiving some form of unemployment benefits.

“State and local governments are facing extreme budget distress; food insecurity is at its highest level in decades,” Jay C. Shambaugh, a former Obama administration economist, recently wrote in a New York Times op-ed. “We’ve regained only about half the jobs lost in the spring. More money from Congress is both fiscally affordable and deeply needed.”

With negotiations bogged down, the White House and congressional Democrats have turned their attention to a stop-gap bill to fund the government past October 1, the end of the fiscal year. Early on, Mnuchin and Pelosi agreed to keep that legislation separate from coronavirus relief.

Failure to reach an agreement there as well could cause a government shutdown just weeks ahead of the presidential election.

Read more: 2 senior PMs at Morgan Stanley’s $665 billion investment-management business share their contrarian outlooks on the election, the stock market, and a vaccine — and break down how they are readying portfolios in advance