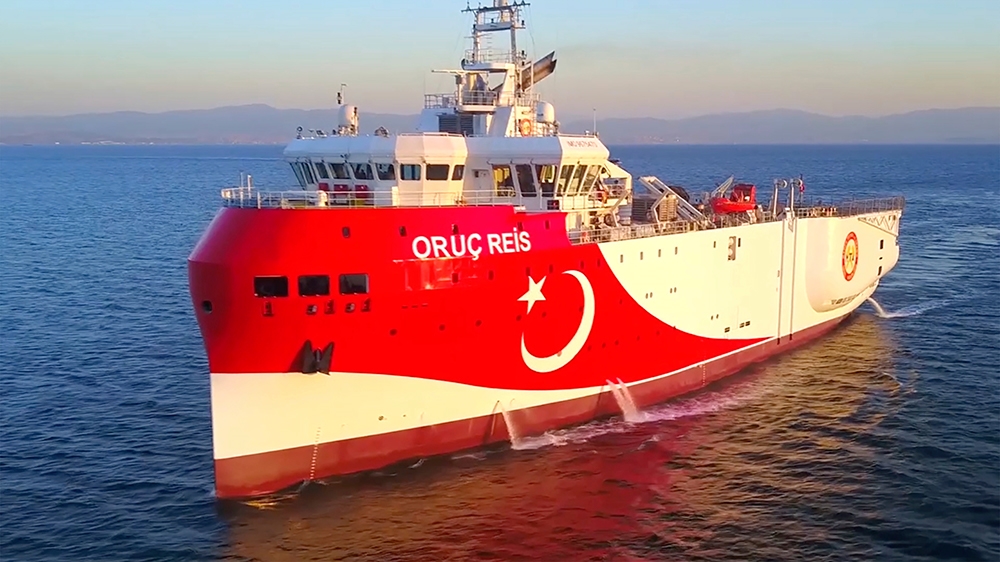 Turkey and Greece have held military exercises in the east Mediterranean, highlighting the potential for dispute over extent of their continental shelves to escalate [Greek Defence Ministry/AP]

Erdogan, who has threatened Greece with military action, described Turkey’s activities in the eastern Mediterranean as the “pursuit of [its] rights and justice” and denounced what he said were Greek efforts to “imprison” Turkey to a small region surrounding its coast.

“Efforts to descend on the riches of the Mediterranean, which are the rights of every country around it, is an example of modern-day colonialism,” Erdogan said.

He also accused some nations he did not name of pushing Greece into a confrontation with Turkey.

“Even if hostile fronts unite, they cannot stop the rise of Turkey. It’s laughable now to use as bait a country [Greece] – which could not even fight its way out of a paper bag – against a regional and global power like Turkey,” Erdogan said in a speech at his palace in Ankara.

Turkey also announced its Oruc Reis exploration vessel will carry out seismic surveys in a disputed area of the eastern Mediterranean until September 12, provoking an angry response from neighbouring Greece.

Despite the rhetoric, Turkey’s foreign minister said on Tuesday his country favours a dialogue with rival Greece that would lead to the fair sharing of resources in the eastern Mediterranean.

Speaking at a news conference with his Algerian counterpart, Mevlut Cavusoglu also accused Greece of engaging in “provocative acts” in the region with the backing of the European Union, which has threatened sanctions against Ankara.

In recent weeks, Turkish and Greek leaders have been engaged in tense rhetoric while their warships have been shadowing each other in the eastern Mediterranean.

Both countries’ forces have been conducting a series of military exercises in the seas between Cyprus and the Greek island of Crete. The standoff was sparked when Turkey sent its research vessel, Oruc Reis, accompanied by warships to search for gas and oil reserves.

The two NATO allies vehemently disagree over claims to hydrocarbon resources in the area based on conflicting views on the extent of their continental shelves in waters dotted with mostly Greek islands.

Both sides have held military exercises in the eastern Mediterranean, highlighting the potential for the dispute to escalate.

The Turkish navy announced the extension of the Oruc Reis’s mission late on Monday – it was previously scheduled to end on September 1.

The advisory came after the European Union’s executive on Monday called for dialogue with Turkey and demanded that Ankara refrain from unilateral steps that stoke tensions in the eastern Mediterranean.

Greece, a member of the European Union, claims the waters are part of its continental shelf and has enlisted the support of the 27-nation bloc, which has condemned Turkey’s “illegal activities” and plans to blacklist Turkish officials linked to energy exploration.

Greece’s foreign ministry called the advisory illegal and urged Turkey to ease tensions and work for stability in the region.

“Turkey continues to ignore calls for dialogue and to escalate its provocations,” the ministry said in a statement. “Greece won’t be blackmailed.”

Greece will keep seeking maritime deals with its neighbours in the region, based on international law and the law of the Sea, the ministry added.

Last week, Greece ratified an accord on maritime boundaries with Egypt, following a similar agreement signed between Turkey and Libya.

Separately, Turkey also said it will hold a military exercise off northwest Cyprus until September 11.

Last week, the EU said it was preparing to impose sanctions on Turkey – including tough economic measures – unless progress is made in reducing soaring tensions with Greece and Cyprus in the eastern Mediterranean.