WASHINGTON—Since President Trump was inaugurated, many members of his national security team have been itching to confront a China they view as the greatest threat to the U.S.

For three years their biggest roadblock, say current and former officials, has been a president who didn’t share their views and whose highest priority was negotiating a trade deal with Beijing.

“The National Security Council said, ‘Give us your wish list of ways to f— with China,’ ” said one former national security official, recalling the early days of the administration. Proposals, ranging from stronger relations with Taiwan—which Beijing considers to be a breakaway province—to halting the global advance of Chinese telecommunications companies, saw little meaningful action.

No longer. Since March, Mr. Trump has approved a head-spinning series of actions to confront China. The U.S. has dispatched aircraft carriers to the South China Sea, blocked China’s tech companies from getting advanced technology, increased arms sales to Taiwan, closed China’s Houston consulate over alleged espionage and sought to ban popular Chinese apps from the U.S. market.

With tensions running high, Washington and Beijing have pushed to decouple technology and trade. But American financial firms including JPMorgan and Goldman Sachs are doubling down on investing in China and expanding headcount. Photo Composite: Crystal Tai

Three big changes account for the administration’s shift, according to the current and former officials in Washington:

• After a limited trade deal with Beijing was secured in January, Mr. Trump’s political calculations changed and he now sees a tougher China policy as good for his reelection campaign.

• Different and harder-line China advisers to the president came to prominence this year after the coronavirus pandemic emerged out of China.

“The Chinese Communist Party really needs to think clearly about how individuals around the world will view their behavior,” said Secretary of State Mike Pompeo, who has become Mr. Trump’s leading adviser on China.

Should the U.S. maintain its current policy to confront China in the coming years? Join the conversation below.

The new offensive has pushed relations between the two countries to their lowest point in decades, spooked investors and, according to Chinese officials and government advisers, confounded China’s leaders. After years when the administration emphasized the personal relationship between Mr. Trump and Chinese leader Xi Jinping, U.S. officials now speak openly of Chinese leaders as heirs of Stalin who are engaged in a battle for global supremacy.

So far, China’s officials have kept their responses to the U.S. actions proportionate, for instance closing the U.S. Consulate in Chengdu when the Chinese Consulate in Houston was shut. 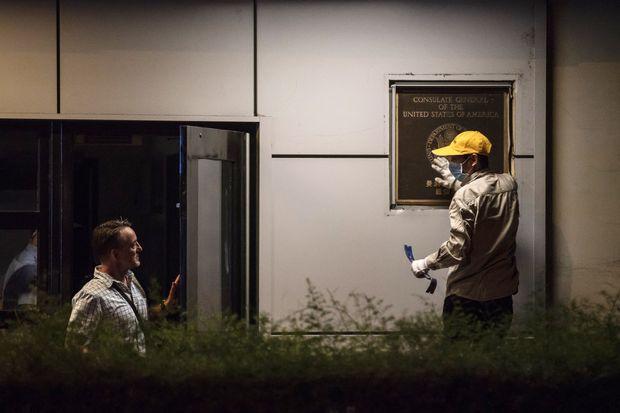 A worker removed a plaque from the U.S. Consulate in Chengdu, China, in July.

The confrontation is unlikely to de-escalate, no matter who wins the presidential election. Mr. Trump has campaigned on acting tough with China. Advisers to Democratic candidate Joe Biden say they share the Trump administration’s analysis of China’s aggressiveness.

Taiwan looms as a flashpoint, as does the continuing battle over cutting-edge technologies.

In the first years of his administration, Mr. Trump often used disruptive, sharp-elbowed tactics in pursuit of his trade deal, ratcheting up tariffs for example. He also praised Mr. Xi and, the current and former officials say, played down China’s threats on Hong Kong and human-rights problems to keep them from getting in the way of negotiations.

Mr. Trump’s senior advisers say there wasn’t a specific meeting that made it clear he was going on the offensive. Rather his dissatisfaction mounted in the spring as the new coronavirus spread from China to the U.S., killing Americans, wrecking the economy and threatening his reelection, current and former officials say. He turned from commending China for mitigating the outbreak to blaming it for its spread, as his administration faced criticism for its handling of the pandemic. Chinese Foreign Ministry spokesman Zhao Lijian’s tweet in March of an unsubstantiated theory that U.S. soldiers may have brought the coronavirus to China enraged Trump more than anything else, said an administration official.

“It’s been an evolution,” said Commerce Secretary Wilbur Ross. “There isn’t one sort of big bang.”

Senior advisers pitched ideas to take on China in ways that would resonate with Mr. Trump, officials said. Hard-liners argued that a ban on the Chinese social media platforms TikTok and WeChat was justified not only because the data they collect on American users could be used by Beijing for spying, but also because Facebook, Twitter and many other U.S. internet companies can’t operate in China. The U.S. was addressing issues of fairness or reciprocity in a relationship they see as favoring Beijing for too long, they said.

That view hit home with Mr. Trump, who calls reciprocity “the R word” in China meetings.

Mr. Trump also began leaning more on his national security advisers than his economic ones. 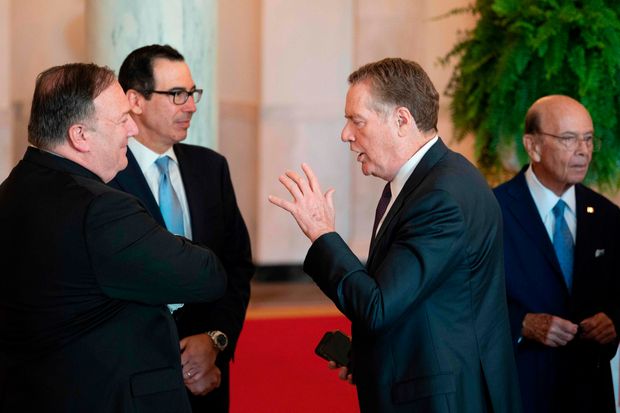 Secretary of State Mike Pompeo, left, has pressed a harder line on China than Mr. Mnuchin, 2nd from left, and Mr. Lighthizer, center.

After the trade accord, the lineup changed. Mr. Lighthizer allied with Mr. Mnuchin to preserve the deal and had limited sway on national security. “There’s a defense lane. There’s a broader security lane. There’s a cyber lane,” Mr. Lighthizer told a think tank audience in July. “If I try to get in all of those lanes then I’m just going to get run over.”

Others—who call themselves “decouplers” or “hard-liners”—want to punish China even if that puts the trade pact at risk. Their ranks include Mr. Pompeo, deputy national security adviser Matt Pottinger, Attorney General William Barr, Mr. Navarro and Mr. Ross, who once worked with the Treasury secretary to get a quick trade deal.

Trump administration officials say China policy is divided between hard-liners whose priority is to confront Beijing and those aiming to preserve a trade deal.

An interagency group rejected a plan by Mr. Mnuchin to fast-track sales of older technology to the company. Mr. Mnuchin declined to comment to the Journal about the rejection. Commerce also put 150 affiliates of Huawei on an export blacklist—now accounting for half of all the Chinese firms on the list.

Administration hard-liners say they see little reason today to court Beijing. In May, Mr. Xi discarded China’s policy of treating Hong Kong differently from the rest of China despite an earlier agreement with Britain, the city’s former colonial ruler, to guarantee a high degree of autonomy for the city.

For Mr. Pompeo and others, the move crystallized why Chinese leaders couldn’t be trusted. “It was such a blatant example of the Chinese Communist Party once again breaking a core promise that it had made,” Mr. Pompeo said.

For Mr. Xi, the potential blowback was worth the risk. Asserting control over the restive population, which had staged large antigovernment protests since mid-2019, was a priority.

After Beijing clamped down, the Trump administration started to put sanctions on Chinese officials over Hong Kong and Xinjiang, China’s northwest region, where authorities have been putting members of the Uighur population and other largely Muslim ethnic groups into detention centers.

The administration also launched the battery of actions from closing down the Houston consulate—alleging it was a “den of spies”—to conducting large naval exercises in the South China Sea.

Chinese officials defend Beijing’s actions in Hong Kong, Xinjiang and the South China Sea as matters of sovereignty not to be interfered with by foreigners, and say that its diplomatic missions aren’t engaged in espionage. Overall, Beijing says that China isn’t trying to supplant the U.S. in the world order, but deserves a say in global affairs.

In elite circles in Beijing, some question privately whether Mr. Xi pushed the U.S. too hard.

“Exactly how many battles would China want to fight all at once? That’s something we need to think through very carefully,” said a Chinese foreign-policy expert who advises the government. 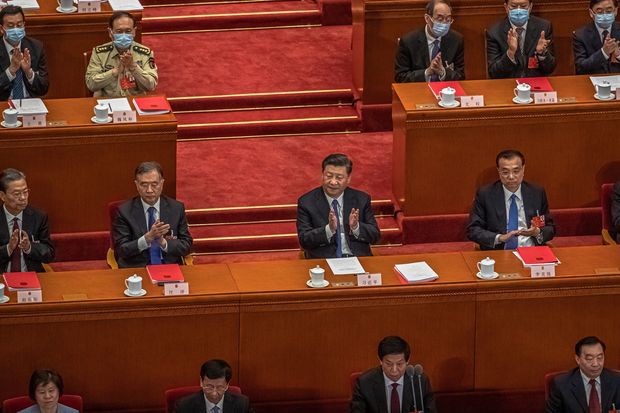 Chinese President Xi Jinping, center, applauded after the approval in May of a draft resolution to impose a national security law on Hong Kong, at the National People’s Congress in Beijing.

There are limits to the administration’s offensive, particularly on actions that could rock the global economy or hurt Mr. Trump’s re-election prospects.

The White House quickly scotched proposals to delink the U.S. dollar from the Hong Kong dollar or cut off a big Chinese bank from the international monetary system.

During a meeting in the late summer, Mr. Trump rejected using the dollar as a weapon, said Larry Kudlow, a White House economic adviser. “He was persuaded that we don’t want to take any actions that would significantly lower the demand for dollars in Greater China and Asia, or reduce the usefulness of the dollar,” Mr. Kudlow said.

A proposed ban on imports of cotton from Xinjiang was watered down after officials at the Treasury and Agriculture departments and the trade representative’s office warned it would damage American apparel makers and other importers.

Administration hard-liners also sparred with other officials over TikTok, the Chinese social-media sensation. After the president said he would ban the short-video app, TikTok lobbyists warned the Trump campaign that it is popular with teens, including many of voting age who live in battleground states.

Mr. Mnuchin played a role in getting Mr. Trump to back down and instead approve a deal in which Oracle Corp. and Walmart Inc. would take stakes in a restructured TikTok based in the U.S. The deal is undergoing a security review.

Taiwan is a deepening area of confrontation. During his first three years in office, Mr. Trump had little interest in the island, say national security officials. After Hong Kong, Mr. Pompeo argued Taiwan could be Beijing’s next target. China sees Taiwan as lost territory to be recovered, and Beijing has objected to U.S. moves it sees as bolstering Taiwan’s resistance and reneging on a pledge to recognize only “one China.”

The U.S. also went ahead with sales of cruise missiles, mines and drones to Taiwan, which would be needed to repel any possible attack from China. Beijing flew 18 warplanes across the midline of the narrow waters that separate the mainland and Taiwan, in what Taiwan officials saw as an attempt at intimidation.

Former national security adviser John Bolton, who had long urged tighter relations with Taiwan but made little headway, said he sees greater appetite to challenge China in the new approach: “The bureaucratic dynamic changed,” he said. “The opposition has faded.”

Write to Bob Davis at bob.davis@wsj.com, Kate O’Keeffe at kathryn.okeeffe@wsj.com and Lingling Wei at lingling.wei@wsj.com