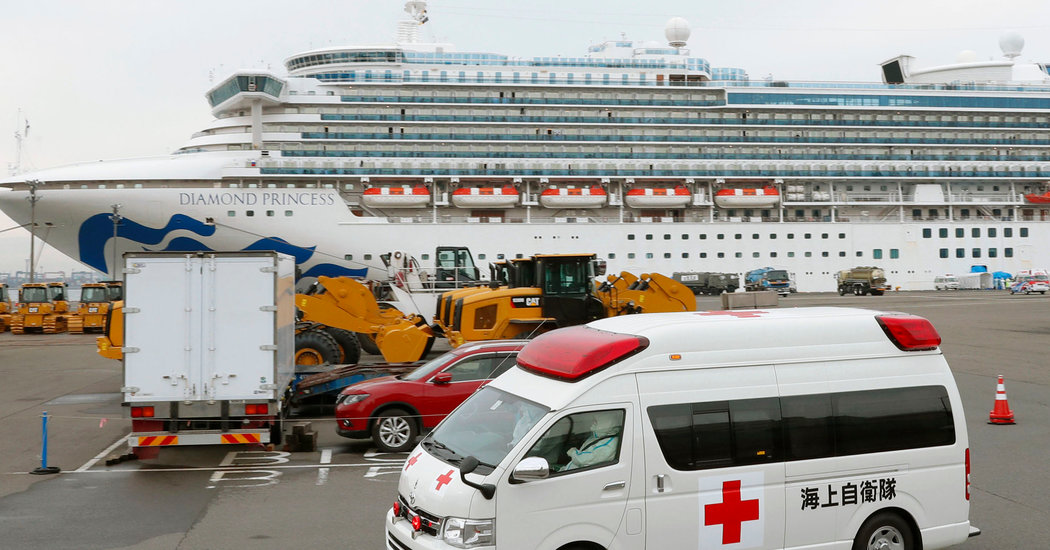 YOKOHAMA, Japan — The United States will evacuate Americans from the cruise ship that has been quarantined for more than a week in Japan due to coronavirus infections on board, the United States Embassy in Tokyo told Americans aboard the ship on Saturday.

American passengers and crew members were told in an email from the embassy that a chartered flight would arrive on Sunday for those who wanted to return to the United States. Hundreds of Americans are on the ship.

“We recognize this has been a stressful experience and we remain dedicated to providing all the support we can and seeing you safely and expeditiously reunited with family and friends in the United States,” the email read.

Buses will move Americans and their belongings from the ship to the chartered plane, which will land at Travis Air Force Base in California, the email read. Some passengers would then continue onward to Lackland Air Force Base in Texas.

The evacuated Americans would then need to undergo two weeks of additional quarantine in the United States. “We understand this is frustrating and an adjustment, but these measures are consistent with the careful policies we have instituted to limit the potential spread of the disease,” the email read.

It said that those who chose not to take the flight would be “unable to return to the United States for a period of time.” The Americans were asked to notify the embassy if they wanted to travel with immediate family members who were not American citizens.

The ship, the Diamond Princess, was placed under quarantine at the city of Yokohama early last week with about 3,700 passengers and crew members aboard, after a man who had disembarked in Hong Kong was diagnosed with the coronavirus. Since then, at least 218 new cases have been confirmed aboard the ship.

Many passengers have expressed fear that the quarantine, meant to protect Japan and keep the virus from spreading, was putting them at risk. Experts have said that infections could have spread aboard the ship, despite measures taken to isolate people.

Japan has more confirmed coronavirus cases — the vast majority of them from the Diamond Princess — than any country outside China, where the outbreak began, and it reported its first death from the virus on Thursday.

As of Thursday, 40 Americans infected with the virus had been taken off the ship for treatment, and hundreds were still aboard. At a news briefing on Friday, an official with the Centers for Disease Control and Prevention, Nancy Messonnier, said officials were discussing a plan to ensure the Americans’ safety.

“It’s really important to all of us that these people are safe and taken well care of,” Dr. Messonnier said. “We are also concerned that the data coming out of Japan suggests there’s a higher risk among the people on the ship, and therefore their safety is of utmost importance.”