Airlines are trying to fill at least some of the seats on the planes they have in the sky.

Air travel in the U.S. has largely ground to a halt as people have grown wary about potentially exposing themselves to coronavirus. Many airlines have resorted to flying mostly empty flights — although in some cases, passengers have complained about crowded planes, as in the case of a recent United Airlines UAL, +4.22% flight.

The airline announced a series of changes on Wednesday to help restore the public’s confidence in air travel, outlining how it will operate at airports and on board planes, including a partnership with Clorox Co. CLX, +1.35% for enhanced cleaning and another with medical experts from the Cleveland Clinic, as it works to keep passengers safe during the coronavirus pandemic.

“ United will introduce sneeze guards at check-in counters, touchless kiosks in select locations for baggage check-in, mandatory face coverings for crew and customers, and will give passengers options when flights are over 70% full. ”

The company unveiled new cleaning and safety protocols that include sneeze guards at check-in counters, touchless kiosks in select locations for baggage check-in, mandatory face coverings for crew and customers, new economy snack bags that will come with a sanitizing wipe, and providing individually wrapped hand sanitizer wipes to customers when they board. United will also limit advance seat selections when possible, and give passengers the option to take alternative flights when flights are over 70% full, the company said.

This is a notable turnaround in policy for the airline, given criticism leveled at United in recent weeks. Earlier this month, Ethan Weiss, a University of California, San Francisco, cardiologist, shared a photo on Twitter TWTR, +6.62% showing nearly every seat full on the plane out of Newark Airport in New Jersey. He said customers were “shocked” and “scared.”

“I guess @united is relaxing their social distancing policy these days? Every seat full on this 737,” Weiss wrote. “They could have avoided this by just communicating better,” Weiss added. “They literally just sent an email 10 days ago telling all of us the middle seats would be empty.” He was traveling with 25 other nurses and doctors who have been volunteering in New York hospitals.

At the time, United said it could no longer guarantee all customers would be booked next to an empty seat. “Last month, we began limiting advanced seat selection for adjacent seats in all cabins, including middle seats where available and alternating window and aisle seats when seats are in pairs,” the company said in a statement to ABC7 DIS, +2.33%.

Airlines for America, an industry trade group, released a summary in April of how U.S. airlines are improving cleaning and safety protocols. Alaska Airlines ALK, +5.16% increased its cleaning procedures between flights and is now using disinfectants that are effective against viruses, it said. American Airlines aircraft are cleaned at regular intervals throughout the day with disinfectant. 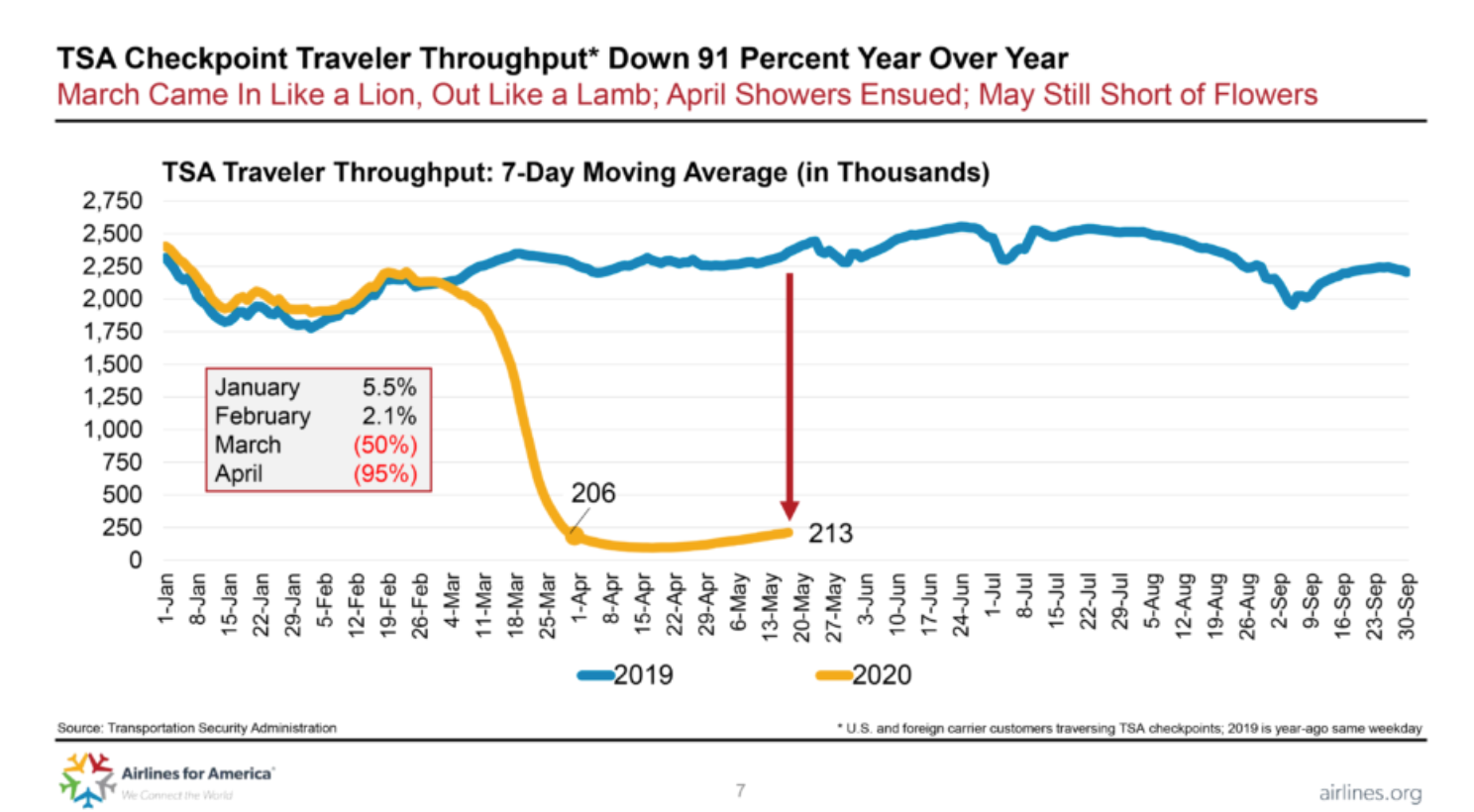 Read more: Airlines are issuing billions of dollars in vouchers — but can you still get a cash refund for coronavirus-related flight cancellations?

Airlines are working to help contain and stop the spread of COVID-19, Airlines for America said. “The safety of passengers and employees is the top priority of U.S. airlines,” it added. “Since the onset of the novel coronavirus pandemic, carriers have been working closely with Congress, the Administration and federal agencies including the Centers for Disease Control and Prevention.”

“There’s no doubt that these unprecedented times will lead to some major changes in the travel industry,” said travel expert Brian Kelly, also known as The Points Guy on his website. “Until a vaccine is developed, carriers will need to make customers feel safe. Increased cleaning is a start, but we’re likely to see demands for more protections, including health screening.”

“ ‘Until a vaccine is developed, carriers will need to make customers feel safe. Increased cleaning is a start, but we’re likely to see demands for more protections, including health screening.’ ”

— Brian Kelly, AKA The Points Guy

“JetBlue was one of the first U.S. airlines to require that crew members wear masks and just recently extended the same rule to passengers,” Kelly wrote on his site. “In addition, JetBlue has limited the number of seats available for purchase, allowing for more space between customers. Crew members will continue to review seat assignments to comply with social-distancing guidelines.”

Jet Blue JBLU, +3.13% said Wednesday it will continue to block middle seats on Airbus AIR, +1.51% planes in rows where people aren’t traveling together through July 4, and will block aisle seats on smaller Embraer ERJ, +3.00% 190 planes. “Even with blocked seats, it’s challenging to maintain six feet of distance between everyone onboard and that’s why JetBlue was the first U.S. airline to require face coverings for customers,” the airline said Wednesday. JetBlue will keep the seat distancing program in place through at least July 6.

“United Arab Emirates-based Etihad has already begun testing new technology that would screen passengers for dangerous medical conditions like COVID-19 by monitoring their temperatures, heart rates and respiratory rates,” Kelly added. “However, many people with COVID-19 have been asymptomatic.”

“In the U.S., Frontier Airlines recently implemented a program that requires passengers to accept a health acknowledgment prior to completing check-in via website or app,” Kelly said. “This is the first we’ve heard of any U.S. airline instituting its own health-screening check. This isn’t the most effective screening, but it’s a start.”

Carriers’ stocks have had a rollercoaster ride in response to the nationwide economic shutdown due to the coronavirus. Warren Buffett recently revealed that Berkshire BRK.A, +2.11% had sold off all of its holdings in the airline sector, including stock in Delta DAL, +4.03%, American Airlines AAL, +2.33% and Southwest LUV, +4.58%.

Boeing BA, +1.98% Chief Executive David Calhoun said a major airline will “most likely” go under as a result of the coronavirus pandemic during a recent appearance on NBC’s “Today” show. He added that it could take three to five years for the industry to recover to the passenger levels seen before the pandemic. Airlines, meanwhile, face an uphill struggle to convince passengers to fly.

“Safety has always been our top priority, and right now in the midst of an unprecedented crisis, it’s our singular customer focus,” Scott Kirby, United’s Chief Executive, said in a video message to customers on Wednesday. “We recognize that COVID-19 has brought cleanliness and hygiene standards to the front of customers’ minds when making travel decisions.”

(Jacob Passy and Ciara Linnane contributed to this story.)