Further details have emerged about a mysterious unmanned craft spotted off Florida last week that I wrote about Monday. We quickly realized the craft is a Wave Glider made by Boeing BA﻿ subsidiary Liquid Robotics and fielded by the U.S. Navy as Sensor Hosting Autonomous Remote Craft, or SHARC. The curious part was all those antennas, suggesting part of what the Navy terms SHARC’s “classified payloads conducting critical Intelligence, Surveillance and Reconnaissance (ISR) missions.” Thanks to some sharp-eyed readers, the exact system has been identified – which may tell us something about the glider’s mission and what it was doing there. 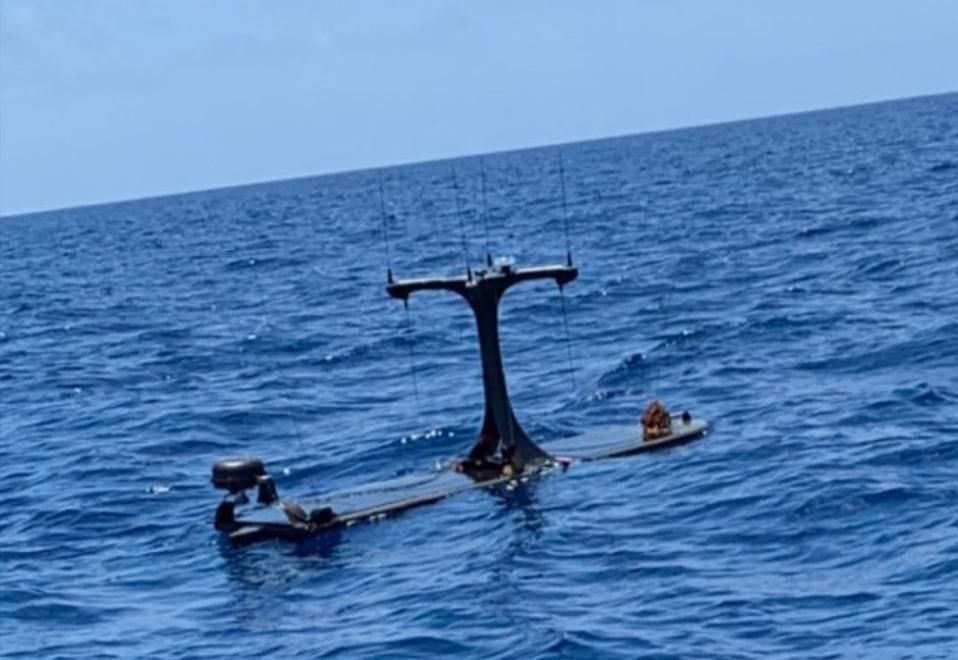 Many commenters noted that the dipole antenna array suggested a direction-finding setup, one for detecting and pinpointing the source of radio transmissions. Twitter submarine expert @Johann_U96 identified the exact model: it’s the SeaWatch system produced by maritime surveillance company ThayerMahan.

SeaWatch is an autonomous surveillance package integrated with an unmanned surface vessel, which gives long-endurance capability, staying at sea for months to monitor ‘illicit activity.’ While the website is cagey about exactly what ‘targets of interest’ are being tracked, the Florida location hints that smuggling may be involved. The website mentions that the system recently completed a successful 84-day mission for an unnamed U.S. government client.

While ThayerMahan is careful not to mention the Wave Glider by name, a 2017 interview with its CEO, retired U.S. Navy Vice Admiral Mike Connor, shows him standing next to a Wave Glider during sea trials off Hawai’i and talking about the company’s collaboration with Liquid Robotics, and their earlier Outpost sensor system is based on a Wave Glider.

The system can monitor multiple radio frequency bands at once, automatically recording every transmission and storing for analysis without any human intervention. Any signals of interest are be transmitted directly back to ThayerMahan’s HQ in Groton, Conn., for further analysis.

Vessels operating legally have to have an Automatic Identification System, a transponder which gives the vessels details and locations to prevent collision. Smugglers and others will turn off their AIS so they cannot be tracked. If SeaWatch picks up any radio transmissions from a point which does not correspond to an AIS track, they know they have potential illicit activity. They may get communications with other vessels, or communications with crew members on the same vessel, or from the vessel’s radar. (The same sort of maritime snooping can now be carried out from space, with systems like the trio of miniature Hawk satellites from startup Hawkeye 360). Of course, it could also spot submarines if they come close to the surface to communicate via radio buoy.

The SeaWatch system was likely included in ThayerMahan’s $19.4 million contract with the U.S. Navy, awarded in July 2019, to develop innovative autonomous systems for intelligence gathering. But the antenna you can see above the surface are the tip of the iceberg. There is also a lot going on under the water.

In September 2019, ThayerMahan contracted to buy KATFISH towed sonar systems from Kraken Robotics. This is an advanced sonar system for imaging the seabed, providing 30 times as much detail as conventional side scan sonar, resolving objects little more than one inch across. KATFISH can be towed by unmanned vessels like the Wave Glider. Again, one can speculate how such a system might be useful in combatting smugglers who leave drug caches anchored to on the sea bed for retrieval, or in other activities.

Such Wave Glider platforms may have many other sensor capabilities as well. The Navy’s plan to carry out trials with 20 SHARCs working together suggests we are fast approaching the future when the sea will be full of floating eyes and ears permanently on station, keeping an eye out not just for enemy submarines but also lawbreakers.