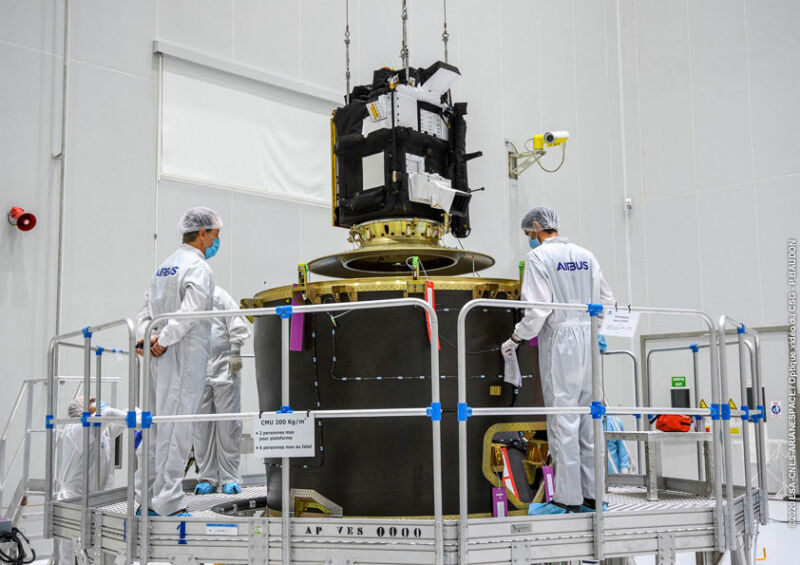 Enlarge / Technicians lower one of the doomed satellites into the Vega’s payload hardware.

An overnight launch of Arianespace’s Vega rocket failed after reaching space, costing France and Spain an Earth-observing satellite each. The failure represents the second in two years after Vega had built up a spotless record over its first six years of service.

The Vega is designed for relatively small satellites, typically handling total weights in the area of about 1,000 kilograms, though it can lift heavier items into lower orbits or take lighter ones higher. The trip to space is powered by a stack of three solid rocket stages; once in space, a reignitable liquid-fueled rocket can perform multiple burns that take payloads to specific orbits.

Vega had started off with a flawless launch record, averaging about two a year for its first six years of service before a solid booster failure caused the first loss in 2019. After the investigation into that failure, the rocket had returned to service just over two months ago with a successful launch.

Last night’s flight saw the solid rockets perform flawlessly, carrying the top stage and satellites north over the Atlantic toward a polar orbit. From there, the upper stage was supposed to take over to deposit two satellites into separate orbits. The larger of the two was Spain’s SEOSAT-Ingenio, an Earth-imaging satellite with a wide-field color camera capable of resolving features down to 10 meters. The second was a French satellite called TARANIS, which was designed to gather data on some of the extreme events that occur during thunderstorms.

Something went wrong with the liquid-fueled stage after it had reached an altitude of over 200km. While it’s not entirely clear at the time what had failed, in the words of Arianespace CEO Stéphane Israël, “The speed was not nominal anymore.” This caused the upper stage and satellites to veer off the planned trajectory, and Arianespace lost control of the vehicle shortly afterward. The spacecraft returned to Earth near where the upper stage was expected to fall in an area that’s completely uninhabited.

The failure happened at a stage of the launch where Arianespace is able to obtain detailed telemetry data from tracking stations in North America. Had the failure occurred once the rocket was over the pole, the company would have had to wait for the upper stage and payload to come within range of an Australian tracking station before any further details could be gathered.

The company’s initial investigation focused on the engine of the liquid-fueled fourth stage, specifically “a problem related to the integration of the fourth-stage AVUM nozzle activation system,” which was “the most likely cause of the loss of control of the launcher.” Arianespace has already named a European Space Agency official who will head the inquiry into the failure, which will focus on why the problem wasn’t caught and corrected prior to launch.