The House of Representatives is planning to convene on Saturday to vote on a bill to provide the cash-strapped US Postal Service (USPS) with $25 billion, in a move which could also create a breakthrough for a bipartisan agreement for another round of stimulus checks.

CNN reported that the bill would try to prohibit operational changes to the USPS which have slowed the mail service and raised concerns that some mail-in ballots for the November election might not reach voters before election day.

The bill will also include Democrats’ initial request for $25 billion in funding for the Postal Service, CNN reported, as Senate Democrats continue to criticize Postmaster General Louis DeJoy for changes to the USPS they say will affect Americans’ ability to vote.

Funding for the USPS was part of the Democrats’ HEROES Act rejected by the Republicans. With negotiations deadlocked over a second stimulus package, Saturday’s vote could provide an opening for a deal, which White House chief of staff Mark Meadows said this week President Donald Trump was willing to sign. 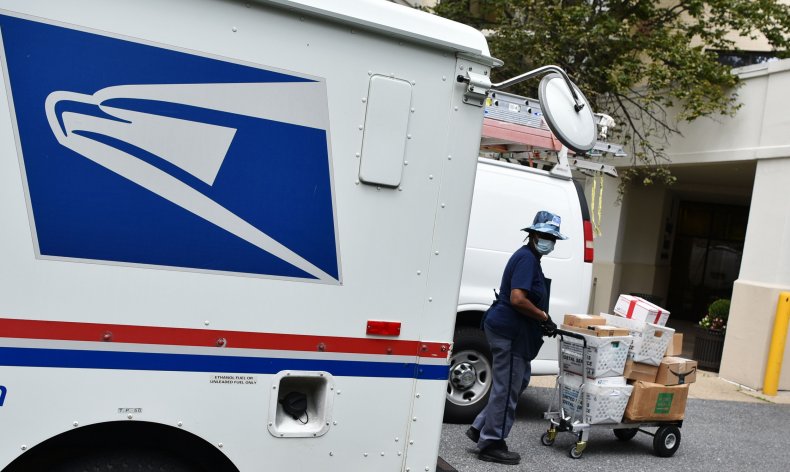 A mail carrier delivers mail to an apartment building in Bethesda, Maryland on August 21, 2020. The House is convening to discuss funding of the cash-strapped USPS. MANDEL NGAN/Getty Images

“Let’s go ahead and get a stimulus check out to Americans. Let’s make sure that small businesses are protected..and put the postal funding in there. We’ll pass it tomorrow. The president will sign it,” Meadows told CNN.

Politico reported that Senate Republicans have reportedly proposed a $500 billion stimulus package which did not mention stimulus payments, but did include $300 in weekly unemployment benefits, more money for the Paycheck Protection Program (PPP), as well as for funds for health and education.

Although Democrats may not agree to any deal without direct payments, the return of lawmakers for the vote and an apparent willingness by Trump to strike a deal and fund the USPS could provide the ground for an agreement on a second stimulus check—if Congress can agree on the amount, Forbes reported.

The battle over the postal service not only affects the election but money in the pockets of many Americans. While 160 million stimulus payments have been made following the passing of the CARES Act, millions of checks are still outstanding, CNBC reported.

Even if the deadlock in Congress over a second round of stimulus checks is broken by September, payments may not start until October. Around 80 percent of the second stimulus checks would be made through direct deposit, but the other 20 percent may be delayed due to postal service changes.

Kris Cox, senior tax policy analyst at the Center on Budget and Policy Priorities told CNBC: “Stimulus checks are one more important item that could be affected by any sort of mail delay and those delays affect people in all 50 states and D.C., so this is a pretty universal concern.”

Meanwhile, on Friday, DeJoy told a panel of congressional lawmakers that election ballots would be given priority and would not be delayed.

“I think the American public should have the opportunity to vote by mail,” he said.