Voters wait in the rain for hours to cast their ballot – WRAL.com 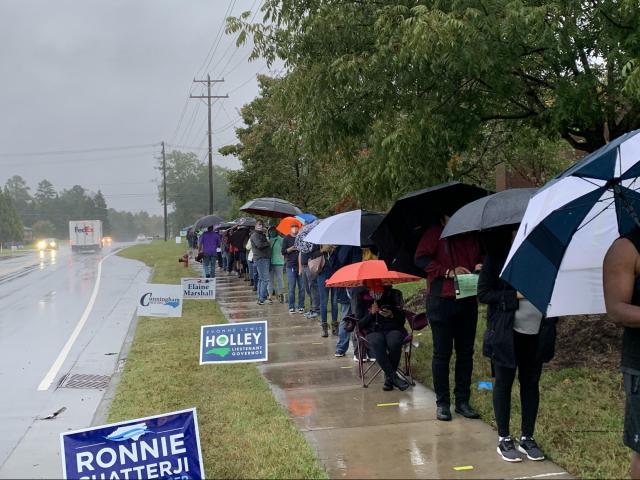 Durham, N.C. — Voters across the Triangle woke up early on Friday morning and braved the gloomy weather to cast their ballots. Early voting began in North Carolina on Thursday, where the Triangle saw “unprecedented” long lines.

Early voting runs through Oct. 31, but the State Board of Elections said Friday that more than 333,000 people cast ballots on Thursday alone, which is about 4 percent of North Carolina’s 7.2 million registered voters. State officials said they believe the turnout was a one-day record for early voting, topping the 304,000 who voted on the final day of early voting in the 2016 election.

Together with the more than 550,000 absentee-by-mail ballots that have already been accepted statewide, more than 12 percent of North Carolina’s registered voters have already cast ballots in the election.

Lonnie Lucas Jr. was the first man in line at the polling site on East Martin Street in Raleigh on Friday. He was standing in the rain two hours before the place opened.

“It’s important for me to exercise my right and not give my power to nobody else,” Lucas said. “I feel its my right and opportunity to voice my opinion. Voice my concerns by my vote.”

People who missed last week’s voter registration deadline can register and vote at the same time during early voting. Proof of residence, such as a driver’s license, other government-issued photo ID or a utility bill, is needed to register. If a college student is registering to vote, they must provide their university ID plus proof of their campus addresses.

During early voting, people can vote anywhere in the county where they are registered to vote. On Election Day, however, people have to vote at their designated precinct.

On Thursday, some Triangle voters reported waiting in lines as long as four to five hours before casting their votes. To avoid the lines in Durham County, the local board of elections released a tool to help people check long wait times.

Polling locations have 6-foot separation lines striping the pavement along with signs to remind anyone with COVID-19 symptoms to vote from their cars. Voters are strongly encouraged to wear masks and practice social distancing.

Each polling location has an option for curbside voting for people who can’t physically enter the building without assistance.