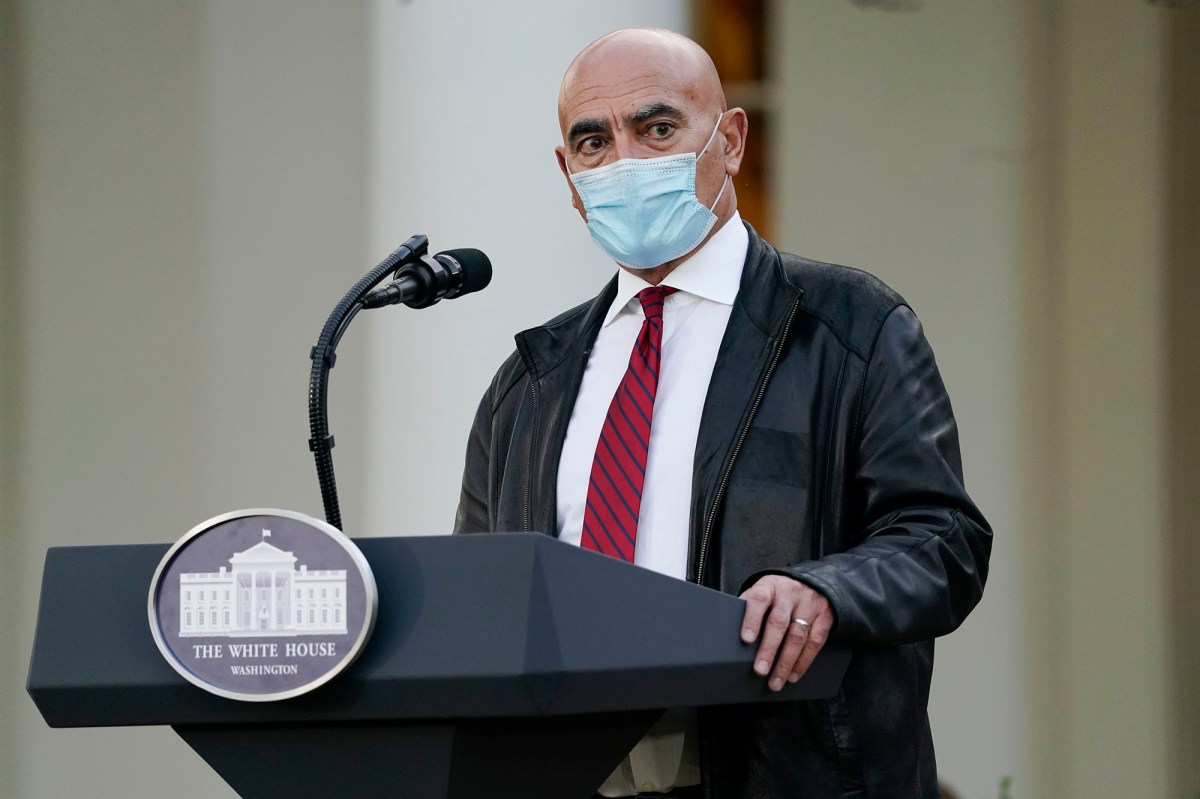 The top advisor of the Trump administration’s Operation Warp Speed said a coronavirus vaccine could be shipped to the states by the middle of December — and the US could reach “herd immunity” by May.

“Our plan is to be able to ship vaccines to the immunization sites within 24 hours from the approval, so I expect maybe on day two after approval on the 11th or the 12th of December,” Dr. Moncef Slaoui told CNN on Sunday.

He also predicted that life could start returning to normal by mid-2021, noting that “70 percent or so of the population being immunized would allow for true herd immunity to take place.”

“That is likely to happen in the month of May or something like that, based on our plans,” Slaoui said. “I really hope and look forward to seeing that the level of negative perception of the vaccine decreases and peoples’ acceptance increases. That is going to be critical to help us. Most people need to be immunized before we can go back to a normal life.”

He said states working with guidance from the Centers for Disease Control and Prevention and the Advisory Committee on Immunization Practices will decide who gets priority to receive the first doses.

“That’s very likely to be maybe health-care workers, maybe first-line workers, maybe individuals who are at very high risk, elderly, people with comorbidities. We will have already identified with each state and department of health where they want the vaccines to be located,” Slaoui said in an interview with NBC News’ “Meet the Press.”

Pfizer, which partnered with the German firm BioNTech on a vaccine candidate, said on Friday that it applied for emergency use authorization from the Food and Drug Administration..

A panel of experts will review the application on Dec. 10, meaning the vaccine may be ready for distribution before the end of the year.

Biotech firm Moderna, which also said its vaccine is 95 percent successful, will seek emergency use authorization in the coming weeks.

Slaoui said the work to develop and plan for the distribution of a COVID-19 vaccine has been kept “isolated” from political concerns and is ready to go regardless of who occupies the White House.

“The operation has been isolated from the administration, from the political environment and the political context. We work very hard to make sure that’s the case. And, therefore, all the decisions are made, the train is running. Whether one administration or the other, it doesn’t frankly make a difference,” he told NBC.

President Trump has blocked President-elect Joe Biden from the funds and mechanics for his transition as he continues to challenge the results of the 2020 election in several states after the former vice president amassed 306 Electoral College votes — beyond the 270 needed to clinch victory.

Slaoui was asked by NBC’s Chuck Todd if he would like to begin advising the incoming Biden administration next week.

“I understand that all the information that I made public, of course, I’ll make public to the new administration. I should not be saying, I have been informed that I should not be saying anything that’s confidential to anybody, including, you know, anybody that’s not part of the administration, and therefore, I’ll act according to what the legal requirements are,” he said.