Watch Mars Make Its Closest Approach To Earth Until 2035 – Forbes 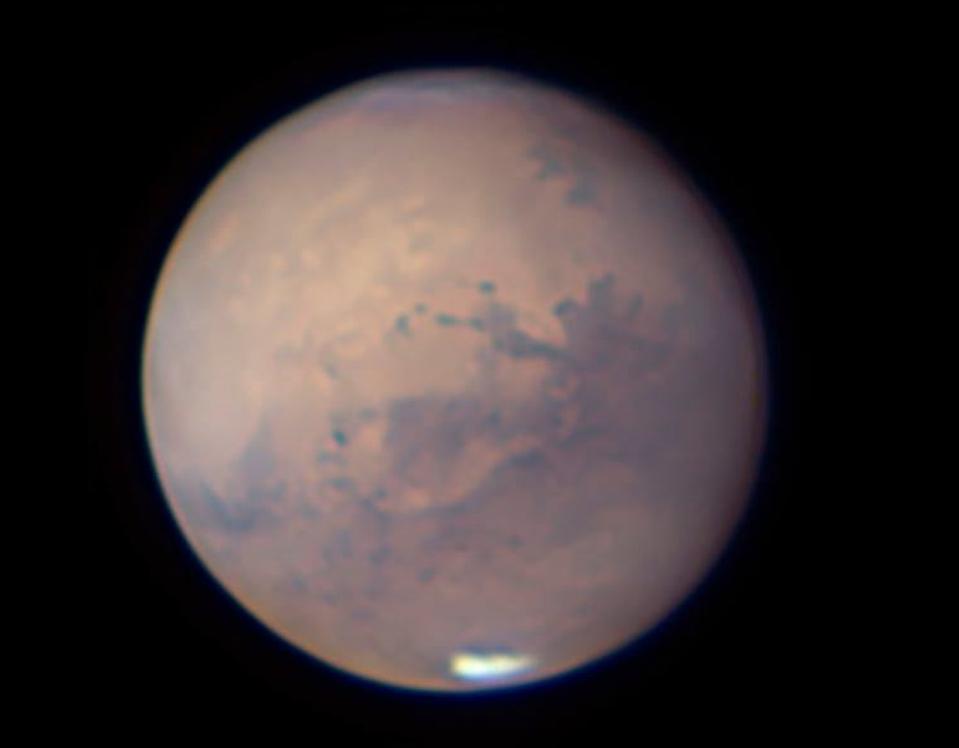 With its shrunken polar cap and its large apparent angular size, Mars is viewed here during Martian … [+] summer and while Earth nears opposition: where the Sun, Earth, and Mars all form a straight line. This image is from September 25, 2020, just 11 days before closest approach. This data for this image was collected using a 14″ off-the-shelf amateur telescope. 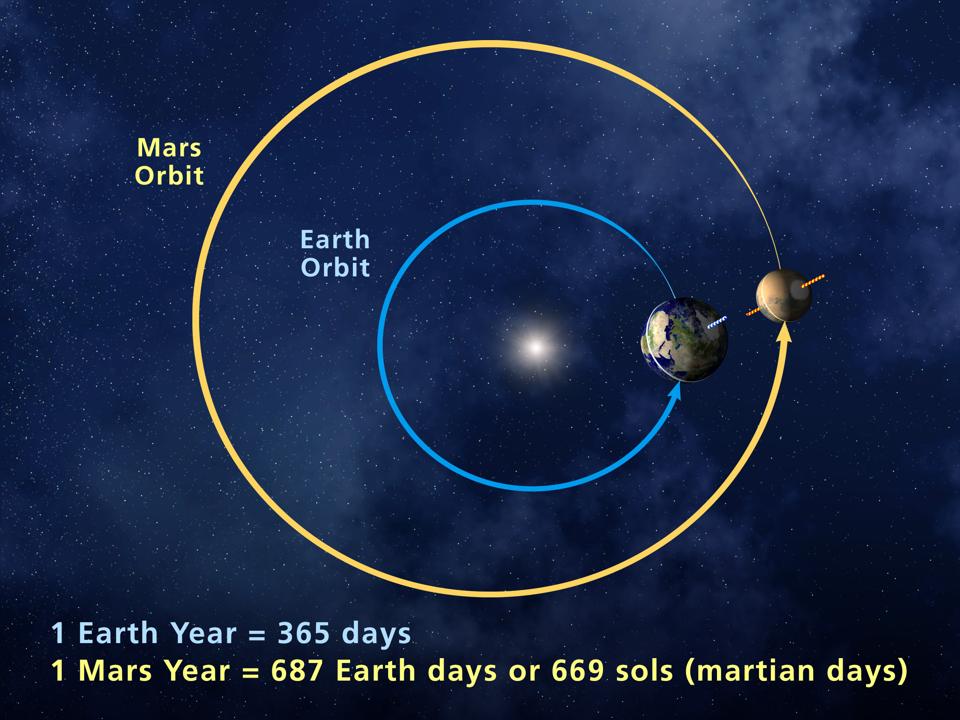 Earth and Mars both orbit the Sun in the same direction, but at different speeds and distances.

The relative orbits of Earth and Mars around the Sun over the timespan of ~20 Earth years. Note that … [+] Earth overtakes Mars and makes a close approach to it on timescales of a little more than 2 Earth years, but only when that close approach coincides with or near Mars’s perihelion (closest approach to the Sun) will Mars appear at its largest.

Consequently, Earth only overtakes Mars once every 780 days: just over 2 years. 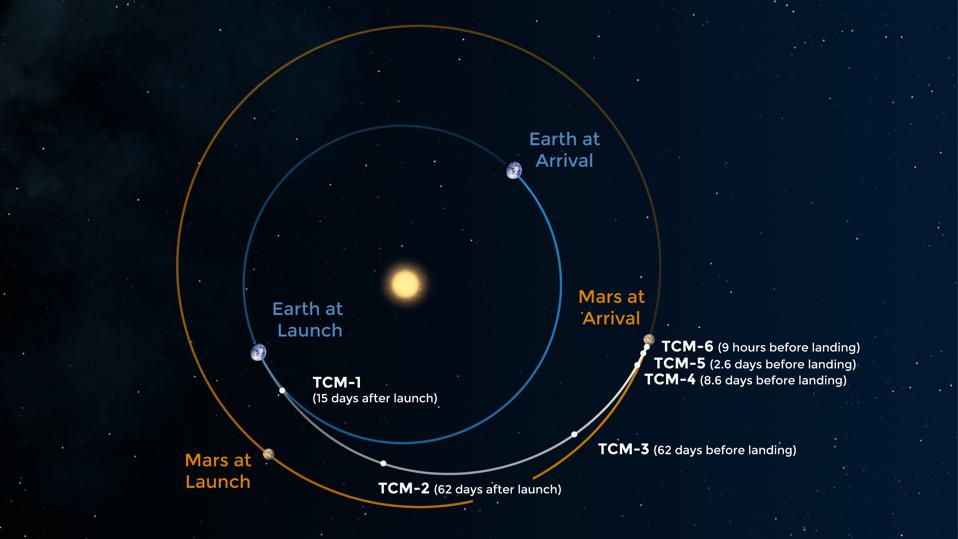 NASA’s Mars 2020 mission, which includes the Perseverance rover, was launched at the end of July, … [+] 2020, and will arrive at Mars in February of 2021. This upcoming close approach of Earth and Mars, as Earth approaches and then overtakes the red planet in its orbit, is an optimal launch configuration that only arises every few years.

From Earth’s perspective, Mars’s angular size varies the most, percentagewise, of any planet. 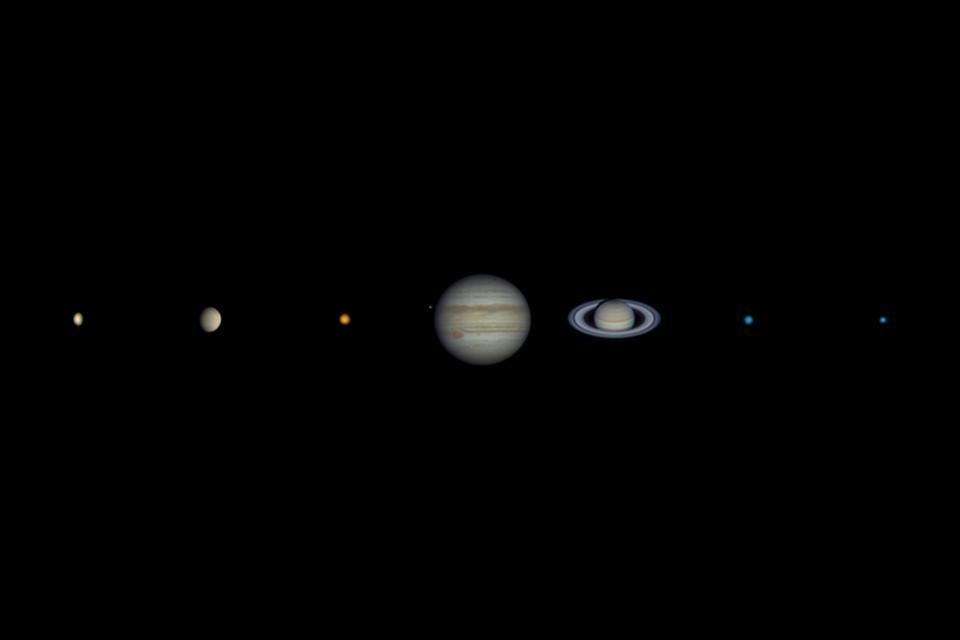 Telescopes reveal Mars’s axial rotation, even during a single night.

This stacked composite set of images of Mars from September, 2020, shows how Mars rotates over the … [+] span of 1 hour. The polar cap, which is part of Mars’s south pole, can be seen to shift as well, as the surviving ice cap is neither perfectly symmetric nor directly placed over the geographic pole.

Unlike Earth, Mars’s seasons are determined by its highly elliptical orbit, not its axial tilt.

The orbits of the planets in the inner solar system aren’t exactly circular, but they’re quite … [+] close, with Mercury and Mars having the biggest departures and the greatest ellipticities. When it’s at perihelion, Mars is just 0.38 AU away from Earth’s orbit, but at aphelion, it’s 0.66 AU away: nearly twice as far.

Martian “winter” occurs when it’s farthest from the Sun, with “summer” arriving when it’s closest. 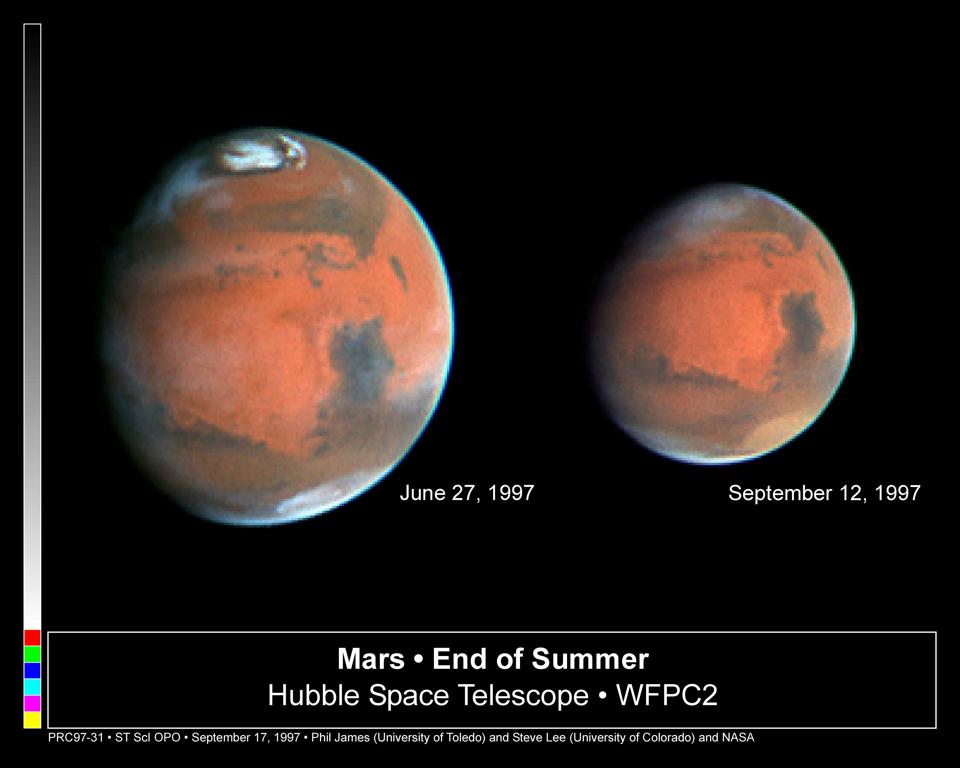 These two views of Mars, from the Hubble Space Telescope in 1997, show the red planet’s surface … [+] appearing to change in terms of ice and cloud cover, a function of the Martian seasons, and in angular size, as a function of Earth’s distance from Mars. The September image shows a warmer, more summery Mars than the July image.

When Martian summer aligns with Earth’s closest approach, Mars appears at its largest. 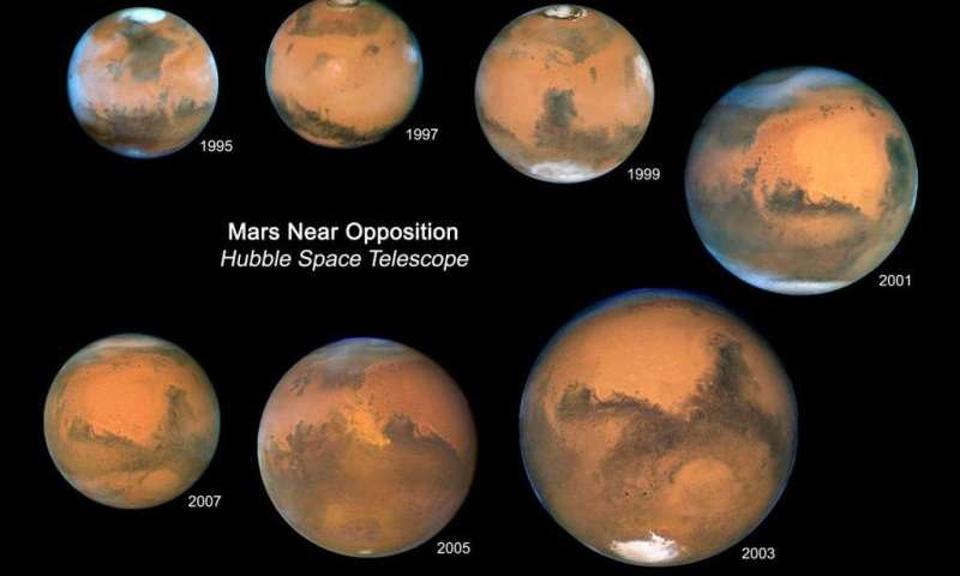 7 different images of Mars taken at or near closest approach with Earth from 1995-2007. Note that … [+] Mars’s apparent angular diameter reached its largest in 2003, which was the absolute closest approach to Earth achieved by Mars in ~60,000 years. Mars reaches very close oppositions every 15-17 years.

Martian summer coincides with the highest dust storm risks, which famously occurred in 2001 and 2018. 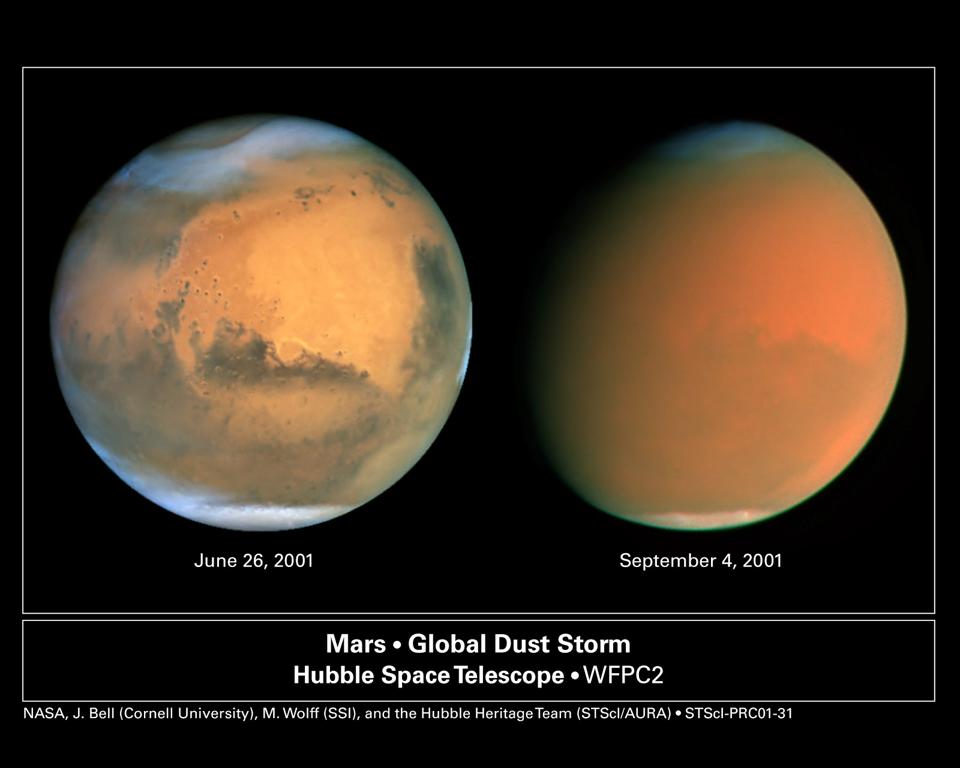 In the summer of 2001, which also coincided with Martian summer, a dust storm blanketed the entire … [+] red planet. Dust storms can mute or erase virtually all of the surface features we’d otherwise be able to see on Mars, and are most frequent during the relatively warm summers on Mars.

This year, Earth overtakes Mars near Mars’s perihelion, creating its closest approach until 2035. 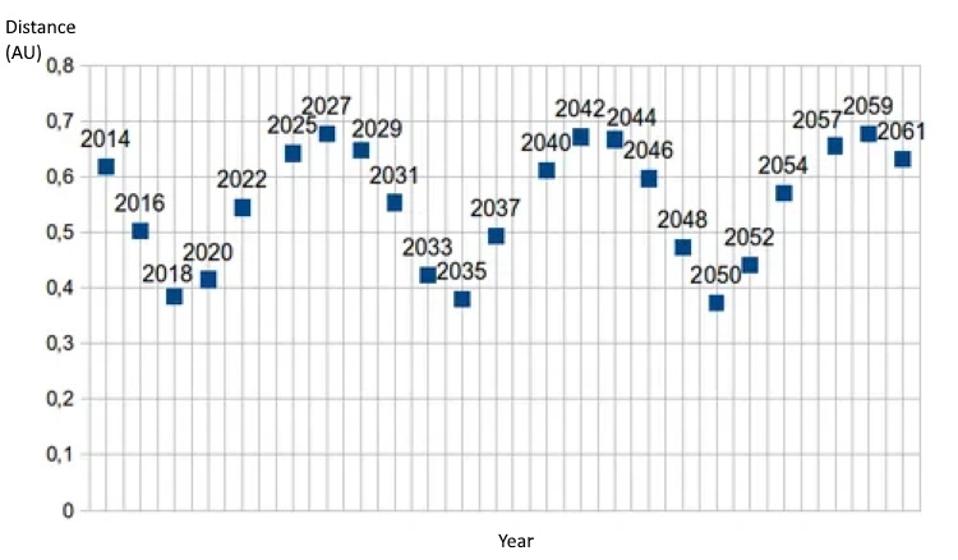 The three images shown here, all composed by Martin Ratcliffe, showcase how the polar cap on the … [+] South Pole of Mars (shown at the top) has been shrinking as Mars warms during its summer. Mars’s angular size has been increasing as Earth nears its closest approach, but that is independent of the Martian seasons, which are caused by Mars’s position in orbit.

Mars remains bright and celestially well-positioned for viewing all throughout October.

Every 780 days, the Sun, Earth, and Mars will align in a straight line, with Earth’s closest … [+] approach to Mars falling within a few days of that phenomenon. When that alignment coincides at or near Mars’s perihelion, the view from Earth becomes spectacular. Note how the 2018 “closest approach” came in late July, but in 2020 it doesn’t come until early October.

Even at a maximum of 25.1 arc-seconds in size, Mars only ever appears point-like without additional magnification. 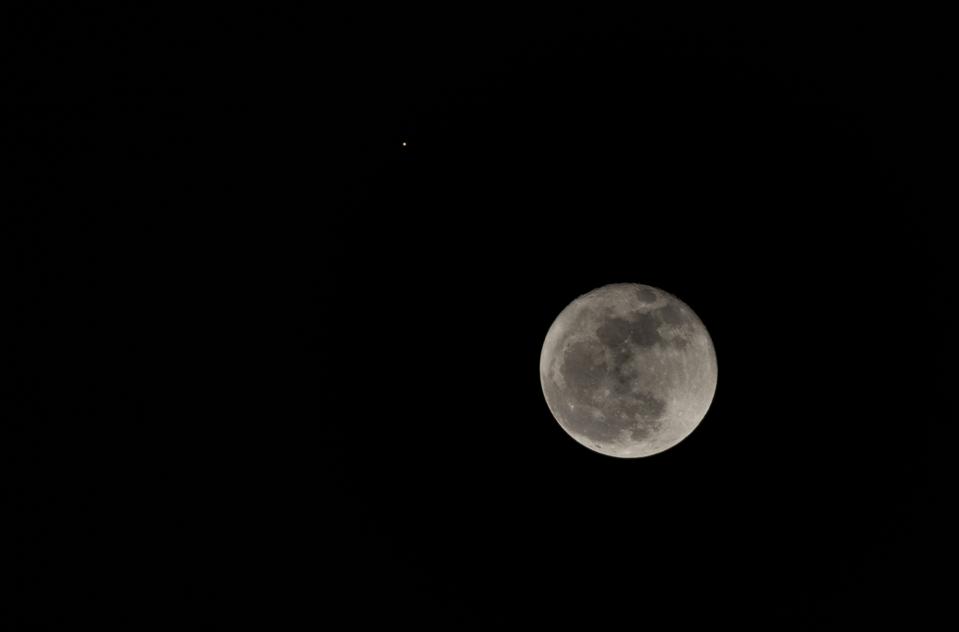 On Friday, October 2, 2020, the nearly full Moon approached Mars in the skies to within less than 1 … [+] degree. Mars is nearly at its closest approach, which it will achieve on October 6, while the Moon is just one day past full. Note how much larger the Moon is than Mars: about a factor of ~75 in angular size. Mars never appears larger than point-like to the naked human eye. (Daniel Garzon Herazo/NurPhoto via Getty Images)