Weather: Early rain will diminish during the day, with a high around 50. 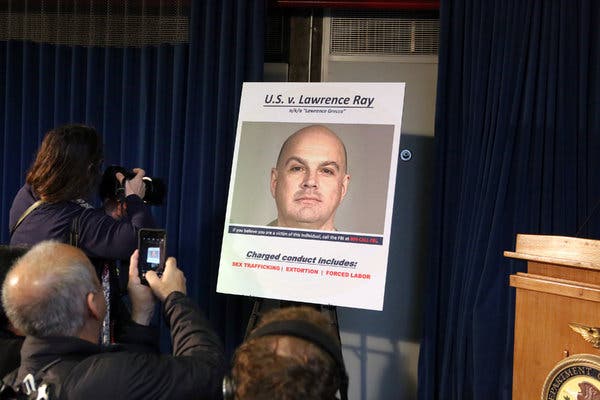 It began when a man recently released from prison decided to move into his daughter’s dorm room at an elite college in a New York City suburb. It would turn into a bizarre tale that would end up with the man being arrested on Tuesday and charged with extortion, prostitution and other counts.

At Sarah Lawrence College in Yonkers, prosecutors say, the man, Lawrence V. Ray, started doing “therapy sessions” with his daughter’s roommates soon after moving into the dorm room in 2010.

As time passed, Mr. Ray had so much control over the young adults that he got them to confess to crimes they did not commit, prosecutors said. He also extorted hundreds of thousands of dollars from them, made them work without pay and in one case forced a young woman into prostitution, federal prosecutors said.

[A Sarah Lawrence College parent is accused of sex trafficking and abusing students.]

Yesterday, prosecutors revealed more of the evidence they had against Mr. Ray, including a collection of cellphone videos — some of which were sexually explicit — journals, financial records and interviews with 17 witnesses. At the hearing, Mr. Ray pleaded not guilty to all charges.

The investigation that led to Mr. Ray’s charges was prompted by a New York magazine article published in April.

Here’s what you need to know about the case.

Almost a decade of alleged abuse and extortion

In his time at Sarah Lawrence, Mr. Ray acted like a cult leader who exploited his victims — college sophomores at the time — by alienating them from their parents and convincing them that they were “broken and in need of fixing,” the authorities said.

At the college, Mr. Ray “laid the groundwork for psychological conditioning that would eventually lead these young adults to become unwitting victims of sexual exploitation, verbal and physical abuse, extortion, forced labor and prostitution,” William F. Sweeney Jr., the head of the F.B.I.’s office in New York, said at a news conference on Tuesday.

After Mr. Ray moved out of the dorm, the abuse continued for eight years, the indictment said.

In the summer of 2011, according to the indictment, Mr. Ray kept exploiting a group of the students who had moved in with him at a one-bedroom apartment on Manhattan’s Upper East Side. He would question his daughter’s friends during interrogation sessions that lasted for hours and often escalated into verbal and physical abuse, the indictment said.

He also forced his victims to work for him, according to the indictment. Around 2013, Mr. Ray took some of his victims to Pinehurst, N.C., where he forced them to do manual labor on his family’s property to repay money he said they owed him. From 2014 to 2018, he took more than $500,000 from the young woman he forced to work as a prostitute, prosecutors said.

Mr. Ray used tactics like sleep deprivation, psychological and sexual humiliation, physical violence and threats of legal action to get his victims to make false confessions, the indictment said. It also accused him of laundering about $1 million he obtained from his victims.

A man with a bizarre life

Mr. Ray, who was arrested on Tuesday at his home in Piscataway, N.J., has a strange history with mob figures and top law enforcement and military officials.

He was once a close associate of a former New York City police commissioner, Bernard B. Kerik. Mr. Ray was Mr. Kerik’s best man at his wedding. Later, Mr. Kerik helped Mr. Ray get a job with a construction company. The two had a falling-out in 2000 when Mr. Ray began cooperating with prosecutors who were investigating Mr. Kerik as a result of work done by the construction company at Mr. Kerik’s home in the Bronx.

In the late 1990s, Mr. Ray was an F.B.I. informant for an investigation into a securities fraud scheme involving the mob. But he and more than a dozen other men were indicted and charged with having been involved in the scheme.

He then served time in a New Jersey state prison on charges related to a child custody dispute. It was after serving this sentence that Mr. Ray moved into his daughter’s dormitory in late 2010, the authorities said.

Yesterday, Sarah Lawrence’s president, Cristle Collins Judd, said in a statement that the college was not aware of Mr. Ray’s presence on campus.

“What we do know is that no reports about this parent’s presence on campus during that semester, formal or informal, were lodged by students sharing that small living space, by their student neighbors, or by anyone else,” she said.

Students at the college said they had been aware of the New York magazine article from last year. Several said they felt relieved that Mr. Ray had been arrested. But some said they were concerned that he had managed to hide his behavior for so long.

“Welcome to America, Your Cell Is Right This Way: Our Long History of Criminalizing Migrants,” a talk about immigrant detention, is at the Brooklyn Historical Society. 6:30 p.m. [$10]

The historian Jeffrey Wasserstrom discusses his new book, “Vigil: Hong Kong on the Brink,” with the writer Jiayang Fan at the Asia Society in Manhattan. 6:30 p.m. [$12]

“Rising Blades: A Poetry Series With a Twist” features readings of politically oriented works, followed by a discussion, at the People’s Forum in Manhattan. 7 p.m. [Free]

Events are subject to change, so double-check before heading out. For more events, see the going-out guides from The Times’s culture pages.

And finally: No plastic bag? No problem.

In less than three weeks, the state’s ban on single-use plastic bags starts. As part of the ban, which begins on March 1, business owners in the city will now be able to charge a 5-cent fee for paper bags.

These are big changes for anyone who is accustomed to using plastic bags when they go shopping. To help with the transition, the New York City Department of Sanitation is giving out free reusable bags.

Here’s how you can get one of the foldable pouches, which are made of 90 percent recycled material:

It’s Thursday — do it for the earth.

I had driven into the city for a fund-raising event. I found what seemed to be the perfect parking spot near a corner.

Backing up, I realized that the space was actually a little tight for my minivan. But I was determined. I pulled forward and then backed into the spot with my arm deftly turning the wheel.

Coming to a stop, I realized I didn’t need to pull forward. I had just parallel parked perfectly, but I was alone and no one was there to see it.

Or so I thought.

When I stepped onto the sidewalk, a group of people sitting at outdoor tables on the opposite corner stood up and gave me a standing ovation.

It made my night.

Two men came running over. They told me they were about to bet on whether I could make it into the space, but I had pulled in so quickly that they hadn’t completed the wager.

One of the men said that he was glad. He would have lost the bet because he never thought I would make it.

It made my year.

New York Today is published weekdays around 6 a.m. Sign up here to get it by email. You can also find it at nytoday.com.

We’re experimenting with the format of New York Today. What would you like to see more (or less) of? Post a comment or email us: nytoday@nytimes.com.