American Airlines wants to win the recovery from coronavirus. It is restoring 55% of domestic seat capacity in July, far more than United’s 30% or Delta’s 21%, adjusted for blocked middle seats.

It is rare for a U.S. airline to diverge from its peers with so much optimism, especially American, whose tight seats and lavatories earn passenger disdain while investors put American’s strategy in a distant third place after Delta’s leading margins and United’s turnaround plan.

Yet American may be proving it has a unique recovery advantage.

“The big hubs win,” American CEO Doug Parker said. “We are absolutely benefitted by the fact that two of the three biggest hubs on earth are ours, which are Dallas/Fort Worth and Charlotte.”

They are leading American’s recovery. About two-thirds of American’s seats in July depart from or arrive at Dallas or Charlotte, according to OAG Schedules. Only 36% of American’s capacity won’t touch either of its two largest hubs, which American previously said are its most profitable. “It’s a vacuum cleaner strategy,” said travel analyst Henry Harteveldt of Atmosphere Research Group. “They just want to suck up whatever traffic is out there.”

“The bigger your hubs are, the more successful you are,” Parker told the Bernstein Strategic Decisions conference in May.

Each additional flight at a hub generates more connecting opportunities at only incremental costs, driving margin growth. Hubs, calculated on connecting traffic, differ from a simple tally of which U.S. airports have the most passengers.

American is bringing capacity back faster in core hubs. Dallas and Charlotte will have 66% of seats restored in July compared to American’s average of 56%, according to OAG Schedules. American’s smaller hub in Phoenix will have only 50% of capacity, and Chicago 47%. 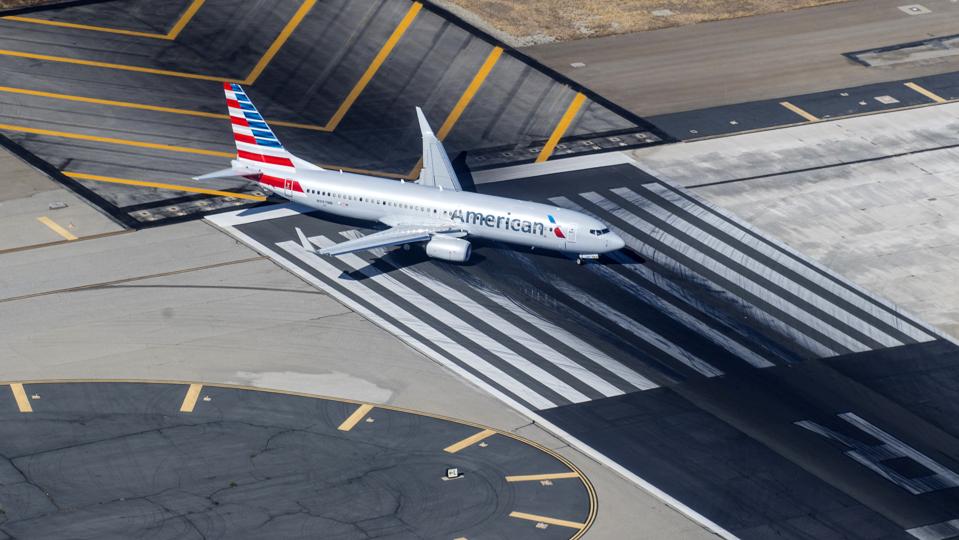 “It’s very risky but there’s a reward,” Harteveldt said. “Of the big four, American is saying we’re going to to try it. They’re being creative. I’m respectful.”

“Some of our competitors are flying a bigger July schedule than we are, by selling extremely low-priced tickets, and wasting money,” United told employees.

United’s pessimism prompts speculation if CEO Scott Kirby, after being forced out of American, wants vindication: better safe and conservative than large and sorry.

Kirby could be heeding the adage that if an airline cannot guarantee fares, it can control capacity. Whereas American is likely still discounting, Cowen analyst Helane Becker said in a research note United is flying less but “working on maintaining pricing.”

American could be flying out of necessity. It has a higher daily cash burn of $70 million in the second quarter compared to Delta’s $50 million and United’s $40-45 million, JP Morgan estimates.

If American is going to lose money keeping a plane on the ground, it could instead offer the flight, hoping revenue more than offsets additional costs like fuel and airport fees.

“Will it be a profitable strategy? Maybe not necessarily net profitable, but it reduces cash burn,” Harteveldt said. Helping the equation, the government pays for airline labor costs through September 30. 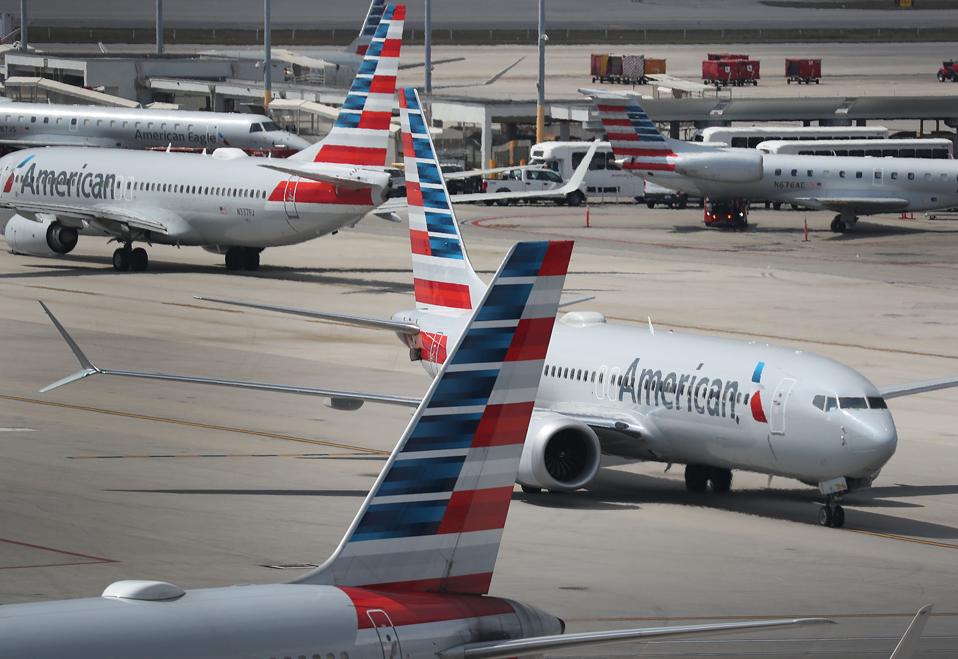 MIAMI, FL – MARCH 12: An American Airlines Boeing 737 Max 8 arriving from Washington’s Ronald … [+] Reagan National Airport is seen taxiing to its gate at the Miami International Airport on March 12, 2019 in Miami, Florida. The European Union along with other nations have grounded all Boeing 737 Max 8 and Max 9 jets, after the crash of a Max 8 being flown by Ethiopian Airlines that killed 157 people on Sunday. (Photo by Joe Raedle/Getty Images)

Other explanations for American’s optimism draw on culture and politics. American’s largest hubs are in Republican states, and Republicans are more willing to travel, a Skift survey found.

But United also has a Texas hub, at Houston. And American’s hubs are in cities with large Democrat populations. Hubs, by definition, bring in travellers from beyond.

Does health lead to a correlation? United and Delta have larger coastal and urban hubs that initially experienced large virus outbreaks, dampening demand. Now Texas is a hotspot.

Big hubs are temporarily the exclusive domain of American. Delta has its Atlanta power hub, but flight economics are weaker since Delta is blocking middle seats, as is Southwest Airlines. American is not.

United’s network is less concentrated, spreading capacity out across more hubs – so many that investors query if United will close some (so far, no).

Another United hub, Denver, is seeing American restore 59% of capacity, slightly above American’s average. That fits in with Cowen’s expectation for travellers to seek destinations with activities outdoors, where virus spread is thought to be lower.

American is also restoring capacity faster at Tampa (59%), but its biggest rebound is in Miami with 72% of seats back on offer. Besides being an outdoor destination, Miami is American’s hub for Latin America and the Caribbean, and domestic connections are needed to fill international flights. 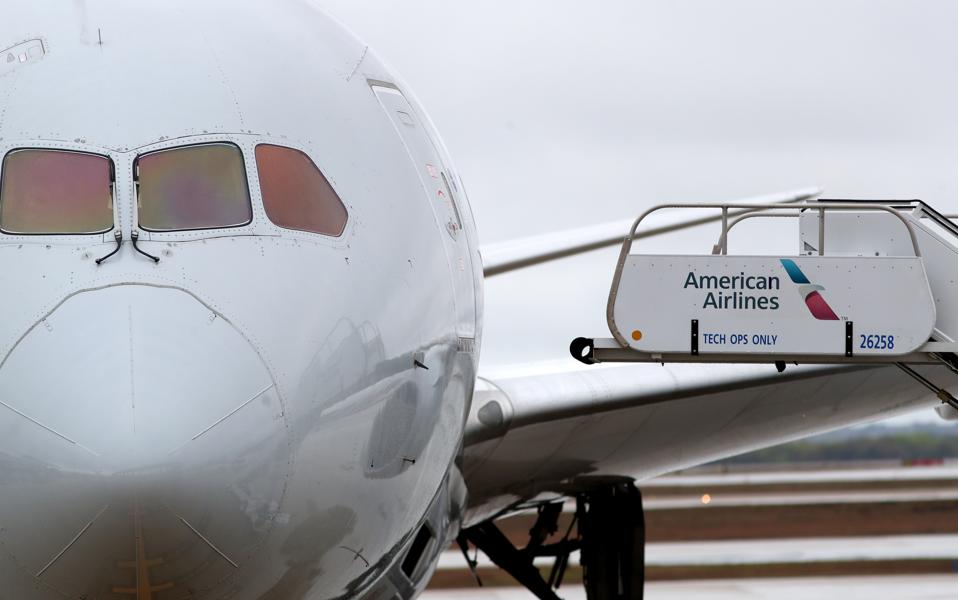 DALLAS, TEXAS – MARCH 13: A view of an American Airlines jet at Dallas/Fort Worth International … [+] Airport (DFW) on March 13, 2020 in Dallas, Texas. American Airlines announced that it is cutting a third of its international flights amid a major slowdown due to the Coronavirus (COVID-19) outbreak. (Photo by Tom Pennington/Getty Images)

But they overlooked a souring international outlook and rising fuel prices. “This suggests that consensus earnings and liquidity forecasts may actually prove too ambitious,” Baker wrote in a research note.

Whatever the level of summer optimism at each airline, it may not indicate an ongoing recovery. Delta said its additional 1,000 flights in August may be the last increase for a while.

Summer is for leisure travel, which is easy to stimulate. Afterwards the focus shifts to corporate traffic, which is hard to stimulate and will be impacted by company travel bans and budget cuts. Analysts worry of a harsh market reaction if airlines trim flights.

Unless unions succeed with winning more payroll grants from the government, airlines will be responsible for labor costs on October 1.

As Baker wrote, “The autumn of discontent is gradually approaching.”