Why Armenia and Azerbaijan are fighting, and why it could get uglier – CBS News 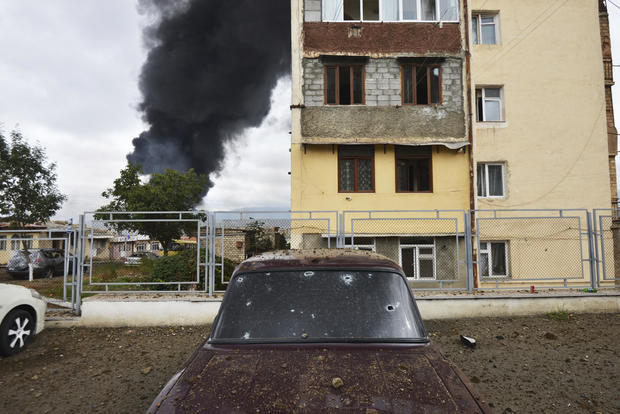 Shrapnel holes in a car as a building burns in the background after shelling by Azerbaijan’s artillery during a military conflict in self-proclaimed Republic of Nagorno-Karabakh, Stepanakert, Azerbaijan, October 4, 2020.  Karo Sahakyan/ArmGov PAN Photo/AP

Moscow — Dozens of people have reportedly been killed and hundreds more wounded since fighting erupted between Azerbaijan and Armenia just over a week ago. The two countries’ military forces are clashing over the Azerbaijani breakaway territory of Nagorno-Karabakh, and with some major world powers backing opposing sides in the standoff — and the U.S. notably absent — there are concerns the conflict could escalate.

International observers and analysts warn that, unlike during previous clashes along the two countries’ shared border, it may be hard to negotiate peace this time, not least because NATO member Turkey has backed Azerbaijan and the United States appears uninterested in playing the vital role of arbiter.

Officials on both sides claim to have inflicted serious losses on the other’s. Both sides claim the other has killed civilians, including new reports Monday by officials in Azerbaijan that the city of Ganja, home to more than 330,000 people, was being shelled by Armenian forces.

Videos posted online from the battleground show an unprecedented use of heavy artillery, tanks, missiles, and even kamikaze drones as the fighting has escalated. Both countries accuse the other of refusing to agree to cease fire, and neither has shown any willingness yet to reengage in stalled peace talks.

What is behind the dispute?

Armenia and Azerbaijan both used to be part of the Soviet Union, but since that crumbled, the new borders have remained in dispute. 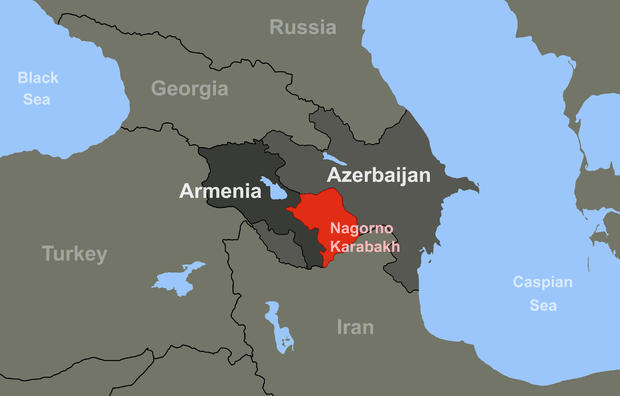 The breakaway region of Nagorno-Karabakh, recognized internationally as part of Azerbaijan, is seen in red.  Getty/iStockphoto

When Soviet Communist rule was nearing its end in the late 1980s, the mountainous region of Nagorno-Karabakh’s autonomous legislature voted to join Armenia. As the Soviet Union dissolved, Nagorno-Karabakh proclaimed its independence, which led to a war with tens of thousands of casualties. It has not been recognized by any other country as an independent state

The long-simmering conflict has been mediated by the “Minsk group,” set up by the Organization for Security and Co-operation in Europe (OSCE) in 1994 and co-chaired by Russia, France and the United States. 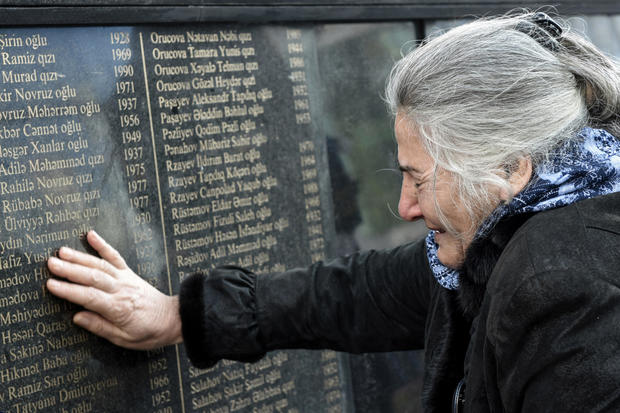 A woman cries at “The cry of the mother” monument in Baku, Azerbaijan, February 26, 2019, during a rally to mark the 27th anniversary of the Khojaly Massacre in Karabakh in 1992. The massacre is considered one of the bloodiest and most controversial incidents of the war between Armenia and Azerbaijan for the control of the Nagorno-Karabakh region. TOFIK BABAYEV/AFP/Getty

The hostilities that began at the end of September are said to be the worst since 1994, when the war ended with a ceasefire and Armenia taking control of the region.

“One step away” from war

Despite that ceasefire, skirmishes have continued along the so-called “line of contact” over the past three decades. The last serious flare-up was in 2016, when dozens of troops on both sides were killed.

Then over this past summer tensions flared again, but this time, with a global pandemic distracting Europe and racial unrest and election year politics engulfing the U.S., there was no serious diplomatic effort made to deescalate the standoff.

“All the signals were in place, everything was telling that escalation was coming. And there was diplomatic silence,” Olesya Vartanyan, senior analyst for the South Caucasus region at the International Crisis Group, told CBS News.

“We are definitely one step away from a large-scale war in the region,” she said, noting that such a conflict could embroil Russia, Turkey, or both.

#NATO SecGen Jens Stoltenberg on Nagorno-Karabakh: “We are deeply concerned by the escalation of hostilities. All sides should immediately cease fighting & find a way forward towards a peaceful resolution. And I expect Turkey to use its considerable influence to calm tensions.” pic.twitter.com/aAln8JkL9f

Russia has close ties with both Armenia and Azerbaijan, and it has sold military hardware to both countries. Armenia is Russia’s military ally, however, and Moscow has a base in the country.

Turkey, a member of NATO and also the Minsk group, has openly backed predominantly-Muslim Azerbaijan in the conflict, calling Armenia a threat to peace in the region.

The Armenian Ministry of Defense said last week that one of its jets was shot down by a Turkish F-16. A spokeswoman with the ministry said the Turkish plane took off from the territory of Azerbaijan, flew into Armenia and shot down the Armenian SU-25 military aircraft. Azerbaijan and Turkey have dismissed the allegation.

What is the international response?

On Thursday, the U.S., France and Russia condemned the fighting in Nagorno-Karabakh in a joint statement.

“We call for an immediate cessation of hostilities between the relevant military forces,” the statement by the presidents of the three countries said. “We also call on the leaders of Armenia and Azerbaijan to commit without delay to resuming substantive negotiations” 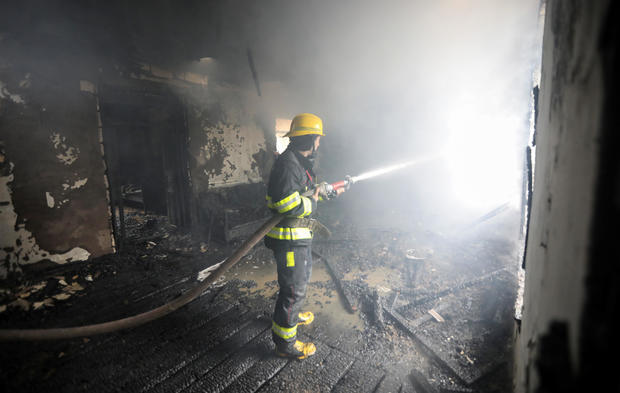 A firefighter extinguishes a fire in a house caused by shelling amid fighting over the breakaway region of Nagorno-Karabakh, in the town of Barda, Azerbaijan, October 5, 2020. AZIZ KARIMOV/REUTERS

Russian Foreign Minister Sergei Lavrov said last week that he had called the foreign ministers of both Armenia and Azerbaijan to say Russia was willing to host talks.

On Monday, Iran, which sits just to the south of both countries, also offered to help, with the regime saying it had “plan” ready to present to Armenia and Azerbaijan this week.

Thus far, Armenia, Azerbaijan and Turkey have all dismissed the international community’s calls for a ceasefire and offers to broker peace talks.

The Trump administration also issued a unilateral statement last week calling on the warring sides to show restraint, but it was the last major international actor to respond — a possible sign of the extent to which the White House is focused on the upcoming election, at the expense of diplomacy.

Armenian Prime Minister Nikol Pashinyan spoke on Thursday with President Trump’s National Security Advisor Robert O’Brien. Pashinyan later told French TV and The New York Times that he had raised the alleged use of U.S.-supplied F-16 aircraft in the conflict by Turkey, purportedly in support of Azerbaijan.

“The United States,” Pashinyan told The New York Times, “needs to explain whether it gave those F-16s to bomb peaceful villages and peaceful populations.” He said O’Brien “heard and acknowledged” his concerns, and promised to arrange a phone call between Armenia’s leader and Mr. Trump.

But that all transpired just as Mr. Trump was confirmed to have contracted the new coronavirus and was quickly admitted to Walter Reed hospital in Washington for treatment.

Vartanyan, of the International Crisis Group, noted that President Trump’s recent predecessors all made efforts to pacify previous flare-ups between Armenia and Azerbaijan.

“Even before the fighting, many senior officials in the region told me they felt no U.S. interest in this conflict for more than three years,” she said.

Washington’s atypical disengagement in this instance could leave room for a further escalation of the conflict, according to Thomas de Waal, a senior fellow with the Carnegie Europe think tank.

“The flare-up can also be seen as a symptom of a world in which the U.S. is no longer acting to defuse regional conflicts,” de Waal wrote in a commentary published by last week by Politico Europe.