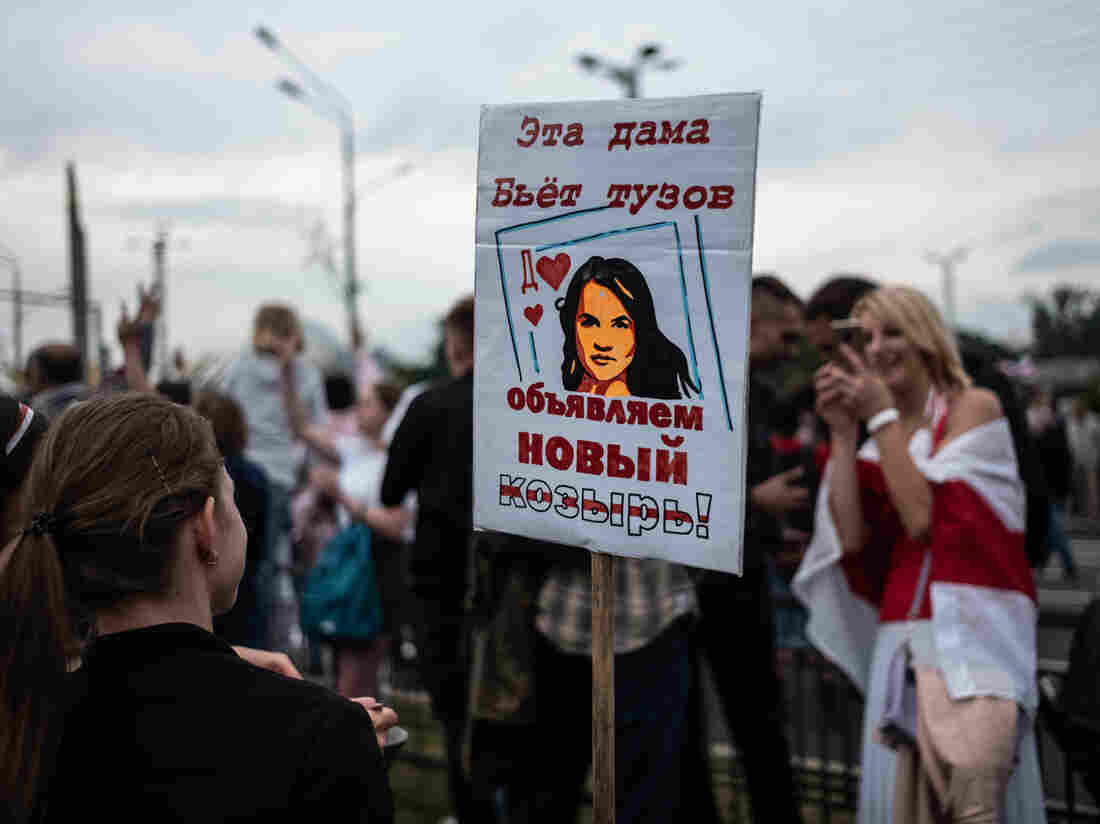 Anti-government protesters hold a sign with a picture depicting Belarusian opposition leader Svetlana Tikhanovskaya as a card that trumps an ace on Aug. 23 in Minsk. Misha Friedman/Getty Images hide caption 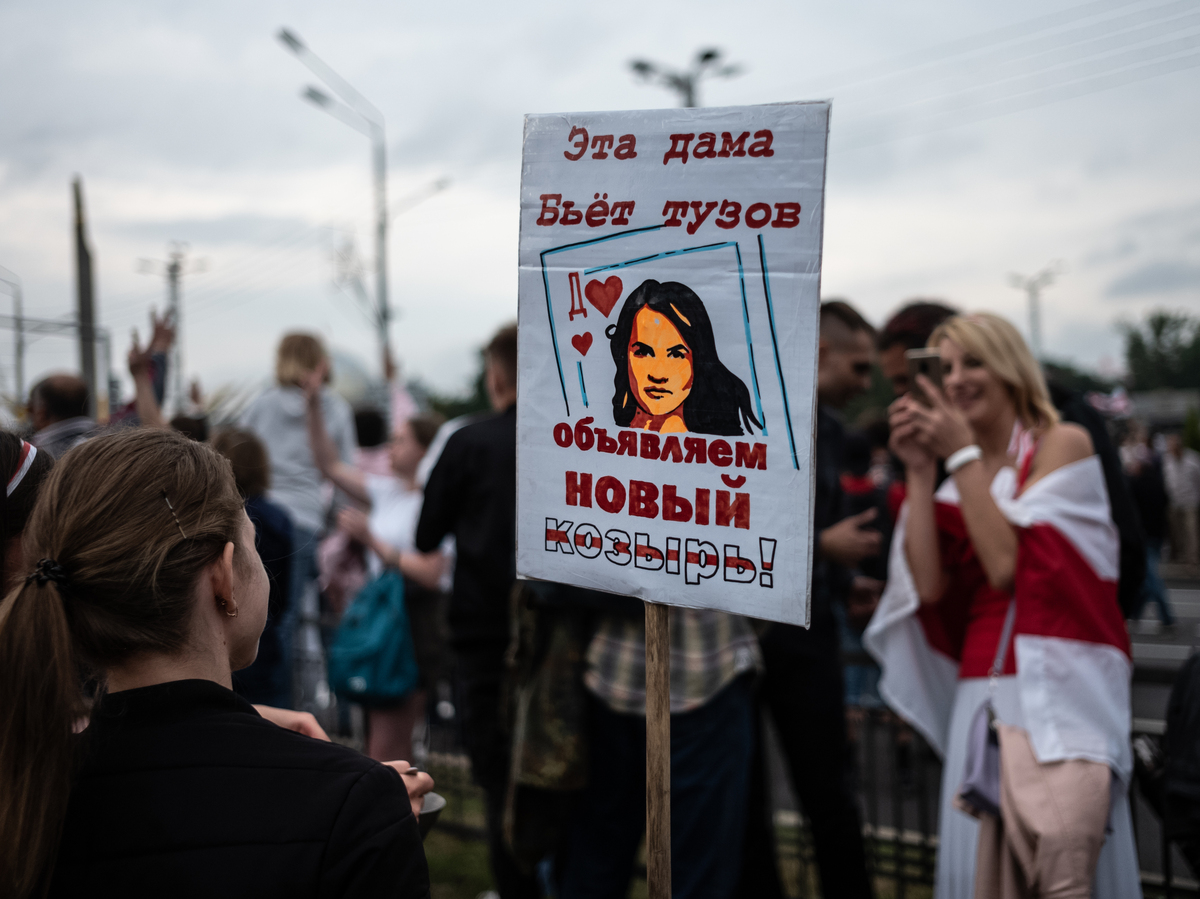 Anti-government protesters hold a sign with a picture depicting Belarusian opposition leader Svetlana Tikhanovskaya as a card that trumps an ace on Aug. 23 in Minsk.

“OK, first of all, if you don’t mind, would you please not call us ‘opposition’? Because we are not the opposition anymore, we are the majority,” she told NPR in an interview from her exile in Lithuania.

Tikhanovskaya, 37, was forced to leave Belarus after President Alexander Lukashenko, Europe’s longest-serving leader, declared a landslide victory in the Aug. 9 presidential election. Nationwide protests against massive vote rigging erupted, with tens of thousands of peaceful demonstrators thronging the capital, Minsk, on the past three weekends.

“Lukashenko has to understand that the point of no return has already passed, and nothing will be the same as it was,” Tikhanovskaya said. “The people have changed. The people have woken up.”

Tikhanovskaya, a political novice, decided to run only after her husband Sergei Tikhanovsky, an anti-government video blogger, was barred from registering his candidacy. He is one of a number of imprisoned Belarusian opposition politicians and considered a prisoner of conscience by Amnesty International. Svetlana Tikhanovskaya speaks at a news conference on Aug. 21 in Vilnius, Lithuania. She fled to the country earlier that month as Belarus’ authorities launched a sweeping crackdown on protesters. Arturas Morozovas/Getty Images hide caption Svetlana Tikhanovskaya speaks at a news conference on Aug. 21 in Vilnius, Lithuania. She fled to the country earlier that month as Belarus’ authorities launched a sweeping crackdown on protesters.

“Maybe Belarusian women were inspired by the example of me and the other two women who found the strength in themselves and acted as leaders,” Tikhanovskaya said. “Our women understood that they are leaders as well, and they don’t have to stay in their kitchens and can go and fight for their rights beside their men — and even in front of their men.”

Women played a pivotal role in carrying on the demonstrations after reports emerged of vicious beatings of protesters in the first days following the election. Often wearing white and bearing flowers, women formed human chains to protest the violence.

“Women were the only people who could take to the streets without the fear that they will be beaten because the society is patriarchal,” said Katia Glod, a nonresident fellow at the Center for European Policy Analysis. “Big numbers of women is something that puts off the riot police in Belarus.”

Ironically, it was also sexism that led to Tikhanovskaya being allowed to register as a candidate in the first place.

“They were sure that nobody would support me because it was my husband who was famous, not me. I was just a housewife,” said Tikhanovskaya. “I continued this election campaign because I understood that I can’t betray all those people who believed in my husband — and afterwards believed in me.”

Before the election, Lukashenko, 66, disparaged the troika of Tikhanovskaya, Tsepkalo and Kolesnikova as “three unhappy girls.” He said only a man could run the country because a woman would be too weak. And asked in an interview if he would debate Tikhanovskaya, Lukashenko said: “She’s just cooked a tasty cutlet, maybe fed the kids, and the cutlet smells nice. And now there’s supposed to be a debate about some issues. What are we talking about?”

Lukashenko’s first mistake may have been to underestimate Tikhanovskaya, whose direct, unpretentious style tapped into Belarusians’ desire for change after being ruled by the same man since 1994. Tikhanovskaya’s main campaign promise was simple to understand: release all political prisoners — including her husband — and hold new, free and fair presidential elections.

After the election, Lukashenko made two more mistakes that only brought more people onto the streets, Tikhanovskaya said.

“People could have believed a result of 53% for Lukashenko and 46% for Tikhanovskaya,” she said. “But everybody knew that 80% is absolutely bull****.”

The European Union has refused to recognize the official election results, and the United States says the vote was neither free nor fair.

Tikhanovskaya said the regime’s second mistake was beating up protesters.

“Even those people who were apolitical, who maybe even didn’t vote or voted for another person, they understood that a crime had been committed against a great amount of people,” she said.

The violence shocked many Belarusians and fueled even more protests.

Yet with most of its leaders either in exile or jail, the Belarusian opposition is splintered and incoherent.

“It’s actually very rudimentary. I don’t think they have a strategy yet,” said analyst Glod, who is based in London. “They’re basically now trying to build the opposition from scratch. And in a country where all these institutions have been absent for 26 years, it’s obviously very hard to do.”

Tikhanovskaya declined to go into the details of her sudden departure from Belarus after the election, saying only that she no longer felt safe there. But from her exile in the Lithuanian capital Vilnius, Tikhanovskaya is isolated from the protesters on the ground as well as from an opposition “coordination council” in Minsk set up to start a dialogue with the regime. The council faces criminal prosecution, and Lukashenko has refused to talk with it.

“His strategy has worked to crush the opposition — but not public dissent and the protests,” said Glod. “People have been deprived of real politics, of a real chance to self-organize, and now we are seeing these efforts. If it’s not showing any effect immediately, it might in the medium term.”

For now, though, Lukashenko still controls the law enforcement agencies. And his ally, Russian President Vladimir Putin, has pledged to send in reinforcements if “the situation becomes uncontrollable” on the streets of Belarus.

When asked about the Kremlin’s influence on events in her country, Tikhanovskaya downplays the threat of an intervention by Russia.

“We don’t see any reason for them to interfere in our internal affairs. It’s only the business of our people and our so-called president. This isn’t about geopolitics,” she said.

Glod disagrees. Without Putin’s backing, she said, it’s possible that Lukashenko would already be out of power.

“Russia certainly is playing a key role,” Glod said. “After the people of Belarus, I would put Russia second in terms of any influence that it has been exerting on the situation.”

The Belarusian opposition still faces a struggle to assert itself and harness the political energy on the country’s streets.

But Tikhanovskaya remains optimistic. She said she hopes to ring in the New Year at home, in Belarus.