You can now preorder the colorful iPad Air

Apple kicked off the fall with four new products: Apple Watch SE, Apple Watch Series 6, the eighth-gen iPad and the iPad Air. Three of those are already available, and Apple is now opening up preorders for the fourth-generation iPad Air.

It’s a fully redesigned, oh so colorful iPad starting at $599. Deliveries will begin next Friday, October 23 — the same day iPhone 12 and 12 Pro will start arriving. Let’s break down all the models:

Your color choices? Rose Gold, Sky Blue, green, Space Gray or silver. It’s an aluminum build and, as a whole, this iPad Air looks more like an iPad Pro than ever before. The 10.9-inch Retina Display is no longer surrounded by thick bezels that provide a spot for the home button. Now the screen goes up to the edges with thin black bezels around it.

There’s no TrueDepth sensor for Face ID unlocking here, either. Apple instead tucked a Touch ID sensor into the power button on the top. There’s a 7-megapixel front-facing lens located at the top when held vertically or on the left when held horizontally. The main shooter is a 12-megapixel lens on the back that’s paired with an LED flash. For audio, it’ll be a stereo experience. 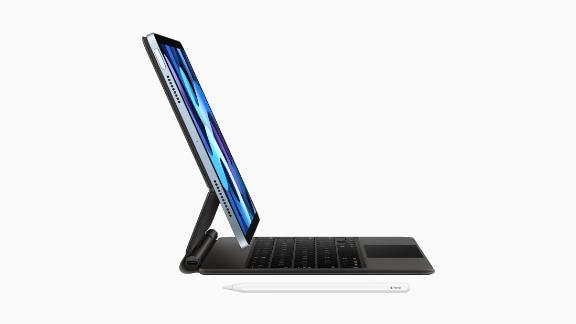 The other big design change is a port switch. Like the iPad Pro — and unlike the eighth-gen iPad or iPad Mini — there’s a USB-C port on the iPad Air that’ll be used for charging and data transfers. There’s a Smart Connector on the side that supports both Smart Keyboards and the 11-inch Magic Keyboard ($169.98; amazon.com). We raved about Apple’s combo keyboard and trackpad back when it launched for the 2020 iPad Pro.

You can also magnetically attach the second-gen Apple Pencil ($124.95; amazon.com) to make sure you don’t lose it. Furthermore, the iPad will wirelessly charge it. See: We told you you’d be getting some iPad Pro vibes on this Air.

Lastly, the iPad Air is powered by the A14 Bionic chip. It’s built on a 5-nanometer processor and features more than 11.8 billion transistors. It’s part CPU, GPU and neural engine. This is the same chip that’s powering the iPhone 12 Mini, 12, 12 Pro and 12 Pro Max. Safe to say it should run iPadOS 14 very efficiently and provide a fast experience.

For now, preorders are open for the iPad Air. Orders will begin arriving next Friday, October 23. If you want to pair it with a Magic Keyboard, Amazon is currently discounting it by $9.