‘You Know Your Audience’: Russia’s Internet Stars Turn Away From Putin – The New York Times

“They’ll pay well for it,” she recalls the blogger saying.

Ms. Hoffman, 22, says she turned down the offer. The appearance of carrying the Kremlin’s message, she said, increasingly risks staining an internet influencer’s image. And that has “serious consequences for ad sales.”

“The public mood has really changed,” said Ms. Hoffman, who has 800,000 followers on YouTube.

Among the constitutional amendments in the vote is one that lays a legal foundation for Mr. Putin to stay in office until 2036. The Kremlin looks assured of victory in the referendum, which ends Wednesday, but its desperate-looking scramble in recent weeks imploring Russians to vote lays bare a more fundamental challenge: For many people, Mr. Putin has lost his aura as the unshakable and irreplaceable leader of his nation.

Mr. Putin’s falling approval rating tells part of the story, but his declining standing in Russian pop culture more vividly underlines his failure to connect with regular Russians. He may still be inevitable, but he is no longer inspiring. He gets ever-more-hagiographic coverage on state television — where a Sunday-night, prime-time show is called “Moscow. Kremlin. Putin” — but he is no longer cool. 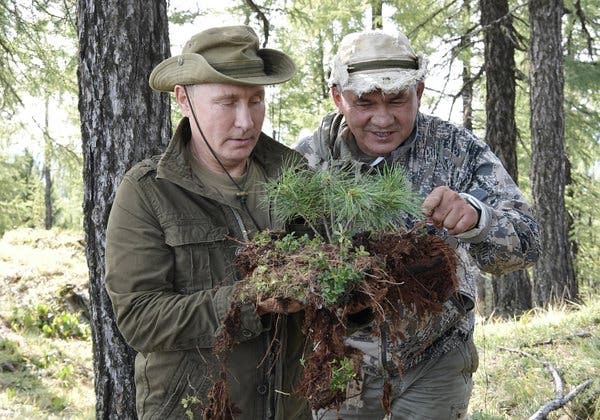 Mr. Putin picking berries in Tuva, Siberia, with his defense minister, Sergei Shoigu, in a 2018 episode of “Moscow. Kremlin. Putin.” The president’s image is carefully stage-managed.Credit…Pool photo by Alexei Nikolsky

And celebrities, many of whom long enjoyed a symbiotic relationship with those in power, are feeling their fans’ wrath when they appear to toe the Kremlin line.

“Those artists who worry about their reputation in the general public,” a longtime Russian music critic, Artemy Troitsky, said, “have started to quietly duck away from the state.”

There was a time, when the annexation of Crimea brought Mr. Putin’s showdown with the West to a fever pitch, that the president held more emotional sway over his public. His carefully stage-managed, Hollywood-style stunts — riding topless on a horse, diving in a submersible — dovetailed with the assertive image he was trying to project in geopolitics and a widespread feeling among Russians that it was time for the country to stand up to the West.

“You and I, the whole country, are for him,” goes a single by the hip-hop star Timati from 2015. “He’s an awesome superhero.”

But over the past two years, pollsters say that the mobilizing force of Russia’s conflict with the West has worn off, replaced by increasing anxiety over the country’s economic and political direction. The growth of an anti-Putin slant in Russian pop culture, where the internet has encroached on state TV’s erstwhile monopoly on mass entertainment, tracks that shift.

“These submersible dives aren’t so entertaining anymore,” said Tatyana Stolyar, a co-founder of Antiglyanets, a popular news source on celebrity culture on the Telegram messaging service.

When Timati recorded another pro-Kremlin single ahead of the Moscow City Council elections in September — “I don’t go to protests, I don’t peddle nonsense” — the music video drew 1.4 million thumbs-down votes on YouTube until the rapper took it down. News outlets called it the most disliked video in the history of the Russian internet; his co-star in it apologized.

The pandemic has accelerated the shift in public opinion, and it has coincided with Mr. Putin’s constitutional referendum, a time when he needed to mobilize the public. Yet with the nation suffering the third highest number of cases in the world and reeling from the economic impact, Mr. Putin’s leadership is under fire.

Maxim Galkin, a mainstream comedian who is a staple on state television, has needled the Kremlin on his Instagram account, which has more than eight million followers.

In one skit, viewed more than six million times, Mr. Galkin acts out a phone call between Mr. Putin and the mayor of Moscow discussing the mechanics of allowing people to go on walks during the lockdown. The president asks the mayor to be careful not to make it look like the government is trying to control when people can breathe.

“Yes, we do sometimes cut off some people’s oxygen,” Mr. Galkin’s Putin says. “But not yet for the masses — for now.”

Young people — who used to be among Mr. Putin’s most avid supporters — have swung hard the other way. In December 2017, the independent polling group Levada Center recorded an 81 percent approval rating for Mr. Putin, and 86 percent among Russians aged 18 to 24. By May of this year, Mr. Putin’s rating had dropped to 59 percent overall — and just 51 percent among 18-to-24-year-olds.

“It gets amplified by the internet,” Denis Volkov, the Levada Center’s deputy director, said of the swing away from the Kremlin among young people, “against the background of overall fatigue with Putin.”

Maxim Galkin, a comedian who is a staple on state television, has needled the Kremlin on his popular Instagram account.Credit…Vitaliy Belousov/Sputnik, via Associated Press

On the internet, which is mostly uncensored in Russia, the expanding industry of YouTube and Instagram stars is increasingly dabbling in politics. Yury Dud, a 33-year-old sports journalist who reaches audiences of tens of millions on his YouTube channel interviewing celebrities, has become a voice of the opposition.

“The vote on constitutional amendments is an embarrassment,” he wrote on Instagram recently, drawing 1.2 million likes. “The only point of the vote is to give Vladimir Putin the chance to stay in power until 2036.”

The government’s apparent attempt to lean on online celebrities to get out the youth vote backfired when some of those same “influencers” went public about it. Erik Kituashvili, a car blogger with nearly four million followers, claimed he was offered $100,000 in exchange for urging fans to vote. Katya Konasova, who reviews beauty products and online shopping sites for her 837,000 YouTube followers, claimed she was offered $14,000 for hinting “poignantly” that the amendments would be good for “motherhood and childhood.”

“I don’t fault these people, because they just don’t realize what they’re doing,” Mr. Kituashvili said in a profanity-laced rant on Instagram, referring to those celebrities who did urge their followers to vote in the referendum. “They’ll be extremely embarrassed when they figure out that they simply sold out their motherland.”

The truth of those claims — or who exactly was making the offers — could not be independently verified, but the mere fact that a slew of widely followed lifestyle bloggers spoke out about them offers an indicator of the public mood. Ms. Konasova, who declined to comment for this story, said in a YouTube video that her offer arrived from an unspecified source “in a roundabout fashion, through acquaintances of my acquaintances.”

“You know your audience,” Elena Sheidlina, another Instagram star with millions of followers, said in an email.

“For me, it’s clear that the reputation of any artist who is in direct, public contact with the authorities,” she said, “becomes the target of audience attacks, and this started happening very recently.”

Elena Sheidlina, who has more than four million followers on Instagram, noted that direct contact with the authorities risked making internet stars the target of audience attacks.Credit…Elena Sheidlina

Close ties between Russia’s ruling class and its leading entertainers have been ingrained in the political fabric since Soviet times, providing the government with cultural legitimacy and the celebrities with wealth and perks. The Kremlin took control of the largest television channels soon after Mr. Putin took power 20 years ago, and essentially became the gatekeeper between any rising performer and a mass audience.

Few raised eyebrows, then, when parades of Russian celebrities backed his presidential campaigns or when Filipp Kirkorov, one of Russia’s biggest pop stars, praised Mr. Putin in 2017 for achievements so great they were “beyond comprehension.”

But this time, some of Russia’s biggest stars appear to be sitting out the campaign. A spokeswoman for Mr. Kirkorov, asked whether he had spoken out on the referendum, responded that he is “spending time with his family during the pandemic.”

Those who did not sit things out found themselves facing a tidal wave of online anger. Evgeni Plushenko, an Olympic and world champion figure skater, posted an Instagram video set to twinkling piano music alongside his wife and 7-year-old son. It urges viewers to vote in the referendum on amendments to “a special book called the Constitution” without mentioning that the most consequential of those amendments would allow Mr. Putin to stay in power until 2036.