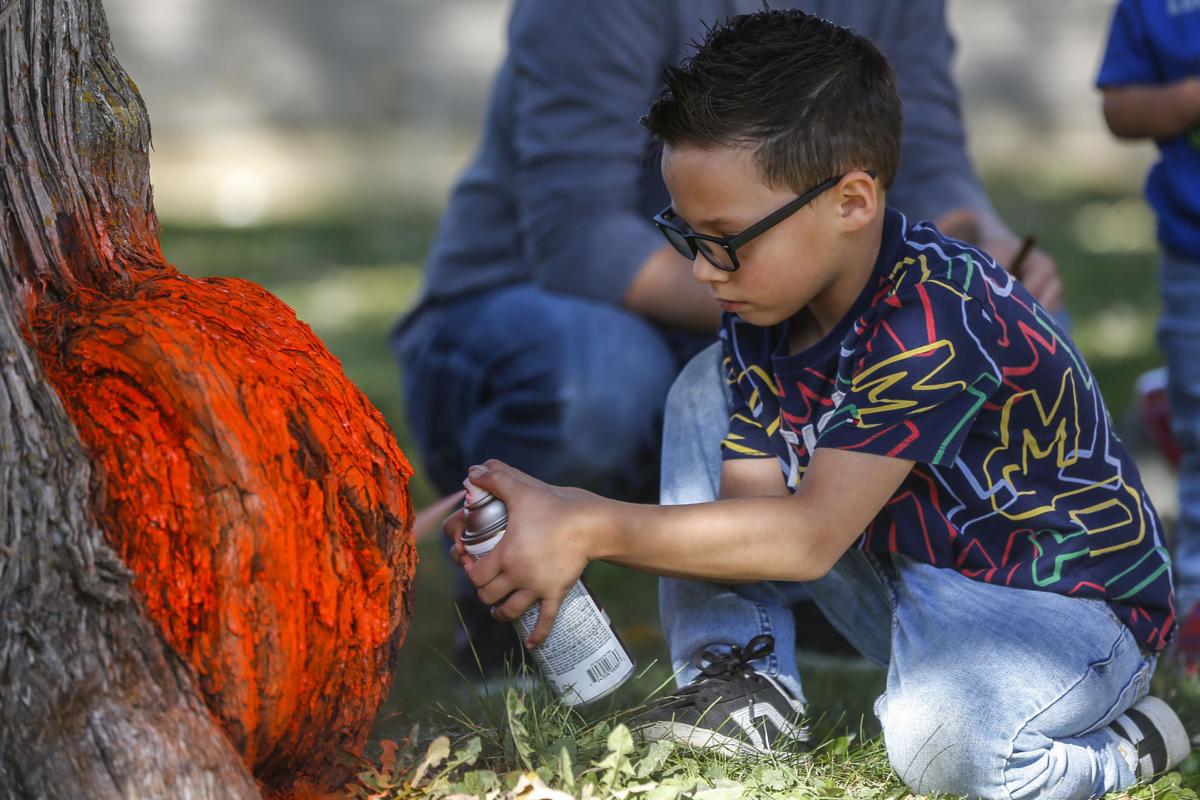 Xander Medellin spray paints a pumpkin at the bottom of a tree in Sheryl Pinkham’s front yard in Clear Lake.

From left, Aimee Medellin and her sons, Xander Medellin, 5, and Bellamy North, 2, paint a pumpkin at the bottom of a tree in Sheryl Pinkham’s front yard in Clear Lake. Pinkham has painted a pumpkin on the tree every year since 2005 and decided to hold a contest to see who could paint it this year.

A fall tradition started by Sheryl Pinkham in Clear Lake has received a new face.

The face — one of a jack-o’-lantern — was painted Wednesday afternoon.

Brothers Xander Medellin, 5, and Bellamy North, 2, of Mason City, took turns painting the pumpkin, including its eyes, nose and mouth, at the base of a tall pine tree outside Pinkham’s home on the 1300 block of Main Avenue.

The boys’ names were drawn from a bucket on Oct. 1 after Pinkham shared a post on Facebook asking parents to enter their children into a contest to have the opportunity to give her pumpkin tree a facelift before Halloween.

Their mother, Aimee Medellin, was among nearly 20 parents who responded to the post within the five-day window.

“I just thought it would be a really cool, fun idea for the boys,” she said.

Sheryl Pinkham has painted a pumpkin on her tree every year since 2005 and decided to hold a contest this year to let the winners do the painting.

Aimee Medellin, a 2013 Clear Lake High School graduate, said she remembered driving by the painted pumpkin tree on Main Avenue when she was growing up.

Pinkham and her daughter, Katelyn, have been painting a jack-o’-lantern at the base of the tree since 2005 when they bought the lot.

“When we were exploring the lot, my daughter and I looked at it and said, ‘That looks like a pumpkin in the tree,’ so we decided that we were going to paint it from then on,” Pinkham said.

Pinkham said Katelyn was responsible for the faces on the pumpkin until she graduated high school and started college at Iowa State University in 2018.

Pinkham said she decided to create a contest to paint the pumpkin tree to give children something to look forward to and smile about in Clear Lake.

Aimee Medellin said her sons were so excited to have the opportunity to paint the tree.

She and her boyfriend, Zach North, got to Pinkham’s house with the boys just before 4 p.m., and within minutes, Xander Medellin was spray painting last year’s faded pumpkin on the tree neon orange.

After the pumpkin received a fresh coat of orange paint, Xander Medellin and Bellamy North grabbed paintbrushes and black paint and started on the pumpkin’s face with the help of their parents.

The whole project took less than 20 minutes for the boys to complete.

Smiles filled their faces as they posed next to their masterpiece.

When asked what kind of pumpkin they painted, Xander Medellin responded, ”It’s a happy pumpkin.”

Pinkham rewarded the boys’ hard work with their individual goodie bags stuffed with “a little bit of everything,” including candy, toys and more.

“Thank you for letting them do this,” Aimee Medellin said to Pinkham.

Bellamy North pulls candy out of a goodies bag after he and his brother, Xander, painted a pumpkin on Sheryl Pinkham’s tree on Wednesday.

Pinkham said the pumpkin tree is featured in dozens of trick-or-tree photos each year.

She estimates her street had more than 620 trick-or-treaters last Halloween, but this year, she’s not sure how many it’ll get because Main Avenue between 14th and 20th streets has been closed to traffic for the city’s nearly $2.2 million street reconstruction and bike lane extension project since July.

“They won’t be able to see it this year like they normally do,” Pinkham said.

The boys’ jack-o’-lantern will be on the tree until next year when Pinkham hosts a new contest to give more children the opportunity to paint it.

Ashley Stewart covers Clear Lake and arts and entertainment in North Iowa for the Globe Gazette. You can reach her at ashley.stewart@globegazette.com or by phone at 641-421-0533. Follow Ashley on Twitter at GGastewart.